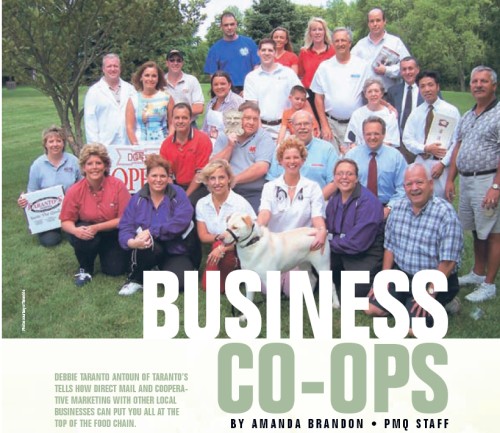 It's hard to distinguish yourself as a small business in a bustling metropolitan area when you have 20,000 people living within a few miles of your store. Debbie Taranto Antoun faced this dilemma when she opened her store, Taranto's, in the Lewis Center/Polaris suburb of Columbus, Ohio.

When Debbie opened the Polaris Taranto's five years ago, the only other pizza restaurant was a chain. After a couple of years, more businesses and pizzerias moved in, and Debbie's sales started to suffer. She knew she had to do something quick before the bills started piling up. She called in some reinforcements-Big Dave and Kamron Karington.

Debbie learned that she needed to get her community focused on being a community. She then made some major changes in her marketing plan. She first mastered the art of direct mail. She's been working aggressively to get in with the schools in her area.

In the fall of 2004, she developed a plan to educate her township about the locally owned and operated small business. She held a meeting for all the small business owners in her area and developed a directory, which was mailed to everyone in her delivery area-20,000 homes. Through the development of this directory, Debbie and her small business group expanded to create the Orange Township Business Association. She and other business owners in her core group are heading up this project. Debbie's big dream of creating a community event will come true this summer with a Fourth of July parade. 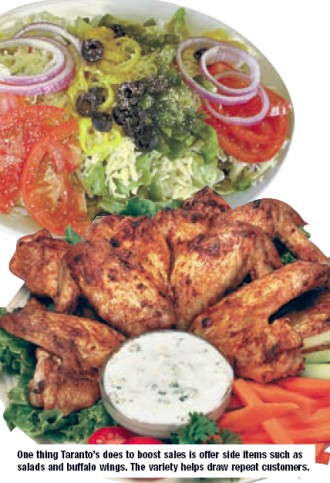 Here's how she did it.

In order to reach the most people at once, Debbie embarked on a direct mail campaign. On her way to becoming a self-proclaimed "direct mail pro," she hit a few stumbling blocks. "On my first mailing, I saturated 8,000 homes in the three-mile radius around my shop," she says. "The offer was for a free salad, free breadsticks with cheese and a free 2-liter with the purchase of any large pizza. What's neat about this is that all of the free stuff cost me less than two dollars. It's a better offer than two dollars off. These items cost me about $1.80, so I'm actually saving 20 cents rather than giving them a coupon. I'm giving them the perception that they're getting all this stuff for free, that's valued at about $9, and it's only costing me $1.80."

Debbie made this first offer to new homeowners only. She gave them the freebies with the purchase of a specialty pizza. She then realized she needed to expand her mailing and mailed to everyone in her delivery area. The lesson she learned from saturation mailing was not to do it all at once. She says it's key to break it into pieces. Mailing in smaller numbers allowed her to offer better customer service. "That first time I mailed to everyone, I was bombarded. I gave horrible service. You've given a good offer, but if you can't give good service it means absolutely nothing. You've just scared those people away."

Debbie's second phase of mailings took a different approach. "I've tried to educate the locals on their hometown pizzeria and the person that lives and works here, the person they should be doing business with rather than the big chains," she says. "They should be supporting me because I'm the one who supports the schools and community."

As part of her mission, Debbie has worked hard to get her name known with the schools. The biggest thing Debbie does with the schools is offer two gift certificates for free pizza for a year to the elementary schools that hold silent auctions each year. "They usually get $300 for the certificates," she says. "It's valued at $500. I also give this to the firefighters for their annual MDA telethon."

She really focused on getting the school orders this year by calling up all the area schools and asking if she could bring lunch for all the teachers and staff. "I laid out my fliers for this year's pizza deal," she says. "After catering for one of the high schools, they called me up and said, 'Hey, if you're going to do that for me, will you make pizzas for our freshman orientation? It was 75 pizzas. I made $675, which with that one order I paid for all those free lunches and made some money."

When someone from the school places an order, Debbie makes sure the secretary or teacher gets a gift certificate for himself or herself. "Then they almost always call me the next year or the next time they have to order a pizza for a party," Debbie says.

Much like the schools, Debbie gets a lot of business from the businesses and corporations in her area. She gives them a discount on the pizzas and offers free delivery, plates and napkins. "On any given day, it'll be anywhere from 10 to 25 pizzas depending on what corporation we're doing," Debbie says. She goes to the businesses with pizzas from time to time, and mails packets to them to show them what she offers. Each packet includes a letter introducing herself and her business along with a menu. Like she does with the schools, she gives a gift certificate to the person placing the order "for themselves or to give to an employee for a job well done." The gift certificates are always for a free menu item so the customer can choose what they like.

Banding with Other Small Businesses 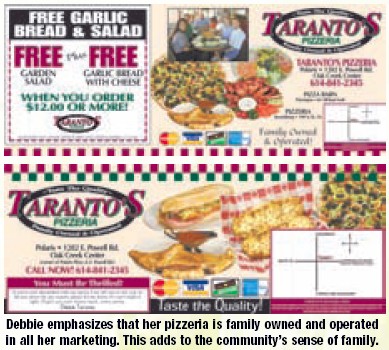 She came up with the idea to distribute a book about the small business owners in her area to the residents of Polaris. Debbie invited over 50 small business owners to her restaurant to talk about her idea. Twenty showed up and jumped on board. After all was said and done, 25 businesses appeared in the full-color booklet. Debbie sold ads to everyone in the book ranging from quarter page ads to full-page ads. The ads sold from $200 to $1,100. For the cover of the book, she gathered all the business owners for a photo. "I had the vet there with her dog, the painters there with their brushes, the realtor there with an open house sign and me there with my pizza box," Debbie says. 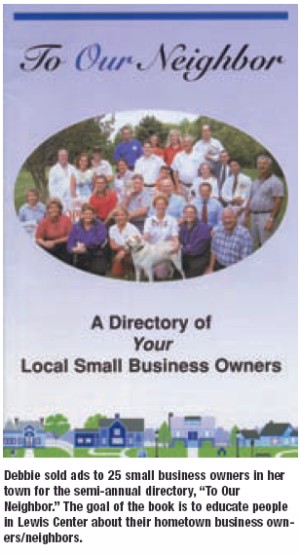 The criteria for the book was the business had to be locally owned and operated. Debbie wrote a letter for the booklet titled "To Our Neighbor" introducing herself and her mission to get residents to do business with the locals. Her ad appears on the facing page with her menu and photos of her store and products. She also runs a special in the booklet for mentioning the directory. The customer gets a free salad and two-liter drink for mentioning the ad. "This is a book that's going to last for six months, that we hope residents will put with their phone books," Debbie says. "It will be much longer term than a Val-Pack or something like that."

Debbie is striving to do more with her hometown education campaign. A parade that started out as a joke with her family will become a reality in July. The members of the Orange Township Business Association, which Debbie helped found, will have floats in the parade. Debbie has employees in a band that will perform "That's Amore!" on her float. The staff will be handing out coupons to the crowd for a five-dollar pizza.

Debbie has a lot going on at her one-unit place selling 2,000 to 2,500 pizzas a week. Her small restaurant offers delivery, pickup and eat-in. Dine-in makes up about 10 percent of her sales, delivery is about 40 percent and pickup is about 50 percent.

She does other marketing beside the book and schools, but sticks mostly to direct mail. One thing she does to keep her name out there is to advertise in Val-Pack. Something that helps with her marketing and business operations is being part of a trade association. She gets her printing done, her employee uniforms made, her electrical problems fixed and even vacations every summer for being part of this association. How does it work? Basically, she paid a $500 initiation fee, and then $90 a year to renew. People in the association come to her and write her a barter dollars check. She gives them food in exchange for the credit. When she goes to spend barter dollars on something like printing, she pays 10 percent in cash and the rest in barter dollars. "If I spent $500 on printing with barter dollars, I pay them $50," Debbie says.

Debbie says her best marketing idea turned out to be her worst one as well. For her four-year anniversary, she sent out a postcard giving away a large cheese pizza for $4. "This was when I was new at mailing and didn't know to break up the mailings," she says. "I mailed them all at once, and we were blown out of the water. I never made so many pizzas in my life. It hurt my service." The positive things it did were sell tons of pizzas, introduce new people to her product and gain some new customers. It was the worst idea because she was so busy. "I should have mailed in increments instead of all at one time so I could give better service," she says. "For those that did get good service, I gained a lot of new customers."

Another thing Debbie started doing recently was putting her email address on her letterhead. She says she got a couple of distinctive emails from customers, and one in particular taught her a valuable lesson. "The people writing could never get a hot pizza," she says. "They eventually had to go to another place but they wished me luck and success. I really appreciated that email. I was able to email them back and let them know that my delivery service needed work, and I had been working on that. I told them that I had recently ordered heated delivery bags and that I was hiring more drivers." 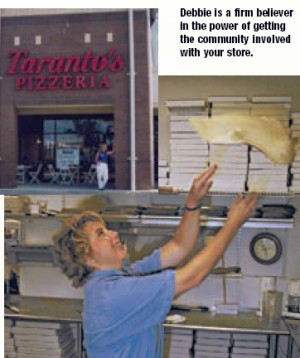 Advice to Other Operators

Debbie says she learned some things when she moved from her family's pizzeria to her own location. One thing is that consistency is key. "Use conveyor ovens," she says. "We doubled our business at the Pickerington location when we went to conveyors."

When dealing with distributors, she says it's wise to get a prime vendor agreement, especially an agreement on the cheese block and what you will pay over the block. She says it's also a good idea to treat your vendor rep with respect and loyalty. "They will bend over backwards for you and remain your loyal advocate when the relationship is solidly grounded," Debbie says. "I don't encourage playing the field with every vendor in town, or driving to every store that is having a sale on Coke. Who has the time, and who needs the stress?

She says the same treatment goes for your distributor delivery drivers. "I have a drink waiting for them when I see them coming," Debbie says. "I ask them how their day is going, and they PUT the order away. They'll also give me the scoop on what's going on at the pizza shop down the street. A little inside info never hurt anyone."

Training employees is also key. She says it's important to train them yourself. "I had five people making pizza five different ways," she says. "I make it a point to train new employees with me for a week. I test them after a couple of weeks. Encouraging them is everything. I'm more than just a boss. I see my employees as an extension of my family."

Her last piece of advice is to use PMQ as your pizza bible. "You can get your take-n-bake instructions there, free advice and free articles, as well as talk to other operators."