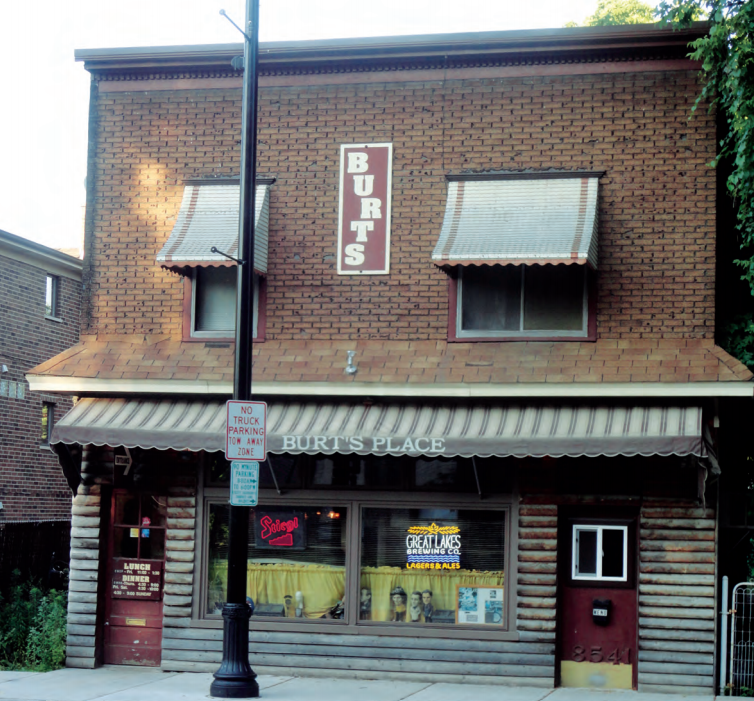 “I’ve always been independent,” laughs Burt Katz, owner of Burt’s Place in suburban Chicago. “I’m like a salmon—I swim upstream.” And any customer who has been to Burt’s Place, an offbeat pizzeria in Morton Grove, Illinois, knows the man’s not lying. Everything about the place speaks to the owner’s personality, from its unusual location at the end of a sleepy residential block to its hodgepodge decor with vintage radios and other various nostalgic pieces. But nowhere is Burt’s signature more apparent—or beloved—than in his pizza, a stylized riff on classic Chicago deep dish that’s been 40 years in
the making.

A Slice of Chicago History

In addition to drawing pizza tourists from around the world, winning the approval of noted deep-dish disparager Anthony Bourdain, and being a cherished stalwart in his community, Katz has made a huge footprint on the Chicago pizza landscape. Although he later sold both brands, he pioneered unique pies at Chicagoland pizzerias that continue to thrive today: Gullivers Pizza & Pub (gulliverspizza.com) in Chicago’s Rogers Park neighborhood and Pequod’s Pizza, with locations in Chicago and Morton Grove. However, since 1989, Katz has been dishing up pies at Burt’s Place with his wife, Sharon. And the pizza itself? Imagine a Chicago-style deep dish with a restrained layer of cheese that won’t knock the wind out of you. Top it with high-quality meats from a local butcher and produce that is hand-selected, purchased and prepped that morning. But, most distinctively, picture a thick yet incredibly airy crust with a crisp, deeply caramelized outer ring. When asked about the genesis of his product, Katz shrugs it off to years of playing around in the kitchen, gradually perfecting the unique pizzas he serves today.

From the outside, Burt’s Place isn’t the sort of pizzeria you’d expect to draw tourists from Europe and South America, or to have families from states away placing an order a month in advance, but Katz has these stories—and more. A 2009 feature on Anthony Bourdain’s No Reservations certainly increased the restaurant’s profile and led to an influx of customers, but Katz was never a stranger to high demand for his pizza. Consequently, Burt’s Place has a unique ordering and reservation system to deal with the constraints of the 35-seat capacity and the relatively long prep and cook time of its pizzas. Katz simply asks his customers to call ahead, place their orders, and reserve a time to come in. When they arrive—10 minutes ahead to get seating and drink orders situated—they can set their watches to the pizza coming out of the oven.

Aside from the deep-dish pragmatics, Katz points out several other advantages of his system. “People have things to do in the evening. This way, they can come in, eat, and have the rest of the night without having to wait around for an hour or more,” he says. In a nod to his suburban customer base, Katz adds a family-friendly explanation for the policy: “People bring in kids, and if they’re waiting around forever, they’re up out of their seats and running around. The way I’ve got things set up, the pizza is ready when they get here and the whole problem is avoided.” Although a quick read of Yelp reviews will attest to the fact that the ordering policy at Burt’s Place can be baffling and even frustrating to the uninitiated—particularly those who show up and see a bevy of empty tables in the restaurant—for every miffed Yelper, there are at least two people who are happy to help out by explaining the ordering policy—and why the pizza justifies the trouble.

Other unique features of Burt’s Place are the menu and pricing. Gridded like a statistical table, the menu reveals that every single-topping large pizza is the same price, and every additional ingredient costs the same. Katz favors this approach because it keeps things simple for him and his wife, as well as the customers. “I don’t want some kid coming in here with a date and $15 in his pocket and getting embarrassed because he doesn’t know how much his pizza is going to cost,” he chuckles. And the prices themselves? Katz says customers routinely approach him at the end of a meal and say there’s a problem with the bill—they’ve been undercharged. You might think such precise, low-cost pricing could only be the result of carefully structured and calculated ordering from a mass distributor. Instead, long before it became fashionable, Katz worked out personal relationships with local community providers, sourcing sausage from a still-secret supplier and driving each morning to a local distributor to hand-pick his produce. Asked about seasonal variation in price and quality, Katz insists that he gets the best he can each morning, and trusts that the price variability will even out over the year.

Perhaps one reason Katz can keep prices so low is the fact that he maintains a lean advertising and marketing budget: $0. He says that instead of fishing for a handful of new customers with costly ads, he prefers to put that money back into the product and low pricing instead. “My philosophy is simple: You don’t ask your customer for money; you give people a good product, a fair price and good service, and they’re happy to pay you for it.”

Although it’s hard to deny that his local legacy and national media attention help the cause, Katz says he has always focused on product and never worried about marketing, while maintaining low operational costs by keeping a tight payroll. By doing all of the back-of-the-house work himself—from stocking to prep to dishes—Katz and his wife run Burt’s Place by themselves, with help from only one additional server during peak hours. Although its location can make a trip to Burt’s Place a bit daunting for out-of-towners, Katz is happy to help on that front, too. Rather than cabbing all the way up from downtown Chicago (a round trip likely to set you back upwards of $80), Katz urges visitors to catch the Metra train from Union Station downtown to the Morton Grove stop. For $3.50 and a ⅓-mile walk, many customers have found it’s the way to go. And, of course, Katz welcomes those who come
hungry—as long as they don’t forget to call ahead!

Patrick Riordan is a freelance writer based in Chicago.