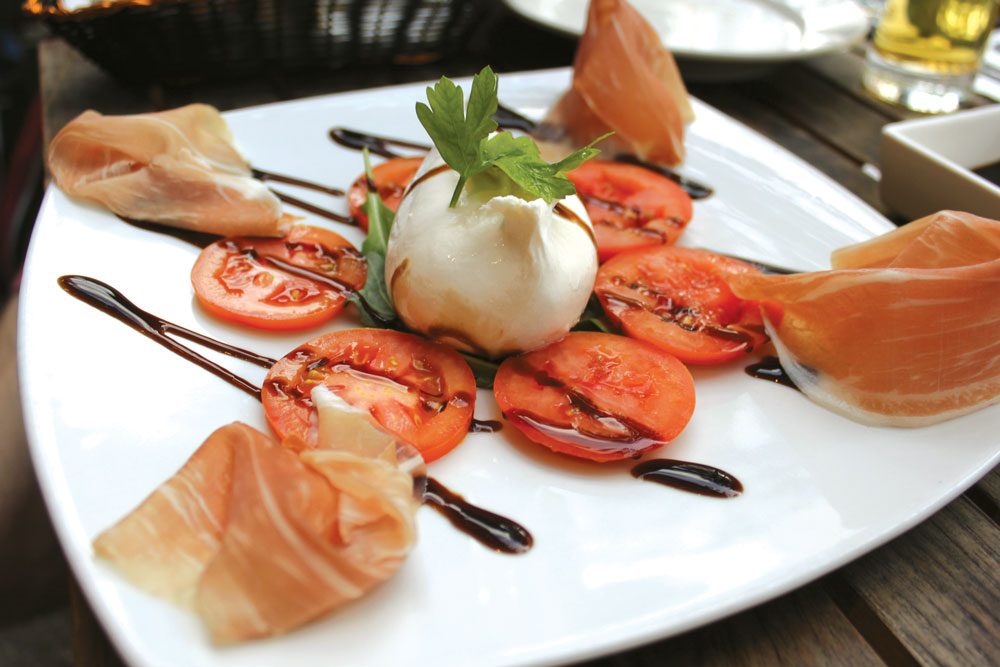 Burrata, like many cheeses, bursts with texture and a subtle taste that’s difficult to define—but, unlike many cheeses, it’s one that has inspired a rabid following. After all, burrata receives its name from the Italian word for butter and, just like its namesake, seems to make everything better. Utilized in a wide variety of applications, from pizzas, pastas and panini to salads, apps and small plates, the rich cheese has won over the palates of chefs and consumers alike. Here, we explore its myriad uses and why it’s become perhaps the most sumptuous, sought-after cheese on the menu.

Chas Anderson, chef/owner at Burrata Wood Fired Pizza in Eastchester, New York, was so enamored of the cheese he calls a “creamy, sexy version of mozzarella” that he named his business after it. Five years ago, when he opened, burrata was not as well-known as today, but he knew it was just a matter of time. “I foresaw it becoming a big hit and thought it was the perfect name,” Anderson recalls. “I made sure I used it throughout my menu, and it’s still very much in vogue.”

Indeed, these glamorous curds make their mark on many of Anderson’s most popular plates. The Crema di Burrata appetizer serves up the creamy insides, called stracciatella, in a vessel, dressed simply with sea salt, cracked black pepper and extra-virgin olive oil, served with garlic-rubbed toasted sourdough for dipping. A salad also features burrata, sliced open to expose its irresistible interior and served with a bed of baby wood-roasted sweet peppers, red onion and parsley—a variation on the classic Caprese.

“Two years ago, maybe 50% of people here in New York City knew of burrata. Now, it’s 80%. And once people have it, they love it. I’ve never met a person who doesn’t.”
—Mario Gentile, Adoro Lei

And then there are the pizzas: The Burrata features wild mushrooms, garlic, chili flakes, Parmesan, basil and porcini oil, while the J. Sexton No. 2, an homage to the Margherita, is baked with San Marzano tomatoes and thin-sliced garlic. After removal from the oven, chefs add cold burrata, torn raw basil, cracked pepper, sea salt and Parmesan. “The Margherita is made more modern with burrata, and the addition of ingredients after cooking plays with temperature and texture,” Anderson explains. “Using raw extra-virgin olive oil brings out its fruitiness, and the other raw ingredients add that fresh component.”

Finally, Anderson’s specials freely use the pizzeria’s namesake, including a pasta made in-house that’s served up with a pistachio pesto and burrata dollops, plus a salad that offers an Italian spin on Greek salad, with heirloom tomatoes, red onion, torn basil, cucumber, sherry vinaigrette, burrata and microbasil.

The takeaway? Burrata is wonderfully versatile. Just like mozzarella, its neutral, delicate flavor makes it the perfect pairing partner with a mind-boggling variety of ingredients. At New York City’s Adoro Lei, chef and owner Mario Gentile has similarly heaped the white wonder into a smattering of dishes: served at room temperature (the best method for full flavor, he notes) with roasted pepper, marinated mushrooms, basil and balsamic-fig reduction; or wrapped in prosciutto and roasted in the wood-burning oven, served atop a salad. The No. 1 seller, though, is the Burrata Divine, a shareable plate that combines wood-roasted eggplant topped with cold burrata after cooking, drizzled with truffle honey—another winning hot-and-cold creation.

On the pizza front at Adoro Lei, the cheese is combined with kale, roasted tomatoes and Parmesan. A panini matches it with prosciutto, arugula, fresh basil and olive oil, while a special pasta dish uses burrata as a ravioli filling, served with caramelized onion and fresh tomato. “I’m such a big fan of burrata,” Gentile raves. “Coming from Puglia, where burrata originated, I was long familiar with it, but it’s very hot right now.”

Burrata is not a cheap cheese, but operators agree that once people try the puffed-up pillowy ball and its creamy contents, they’re happy to fork over their hard-earned dollars for a taste. In fact, many say it’s downright addictive. “Two years ago, maybe 50% of people here in New York City knew of burrata,” Gentile says. “Now, it’s 80%. And once people have it, they love it. I’ve never met a person who doesn’t.”

Gentile imports his burrata from Italy—a potentially tricky proposition given its notoriously short shelf life—but thanks to brisk business, regular deliveries and smart cross-utilization, he’s able to minimize waste and keep the supply rotating at a fast clip, while maintaining a 28% food cost.

Anderson takes a different approach, staying Stateside for his high-quality supply. He sources both burrata and its stracciatella from Maplebrook Farm in Vermont, where it’s crafted by a Puglia-born maker using local dairy. “We did a lot of research on various imports, but it’s so perishable that, by the time we got it, it wasn’t at its best,” Anderson explains. “Of course, it’s an expensive product —like the steak of cheese—but we’re able to maintain a 30% food cost.” And, he adds, other pizzeria owners can seek out less-expensive brand names to keep costs lower for themselves and customers alike.

It also helps that the cheese is a star seller; Anderson goes through 50 pounds per week of the stracciatella alone, and he estimates that nine out of 10 customers order something that features the cheese that dreams are made of. “Given the name of our restaurant, a lot of people ask, ‘Who’s Burrata?’” Anderson says, laughing. “We describe it to customers, but when they take that first bite, it’s mind-blowing.”

Accordingly, Gentile recommends not tampering too much with the delicate flavor of burrata; pair it with ingredients that will set it off and let it shine, not interfere with its integrity. Experts at the Wisconsin Milk Marketing Board offer up a long list of potential pairings: roasted peppers, herbs, cured meats, melon, grapes, light wine, salad, prosciutto crudo, crusty bread, fresh tomato with olive oil and cracked black pepper, pasta or fresh grilled vegetables, to name a few. And Anderson advocates seeking seasonal inspiration—in springtime, for example, he’ll whip up a shaved salad with asparagus and burrata pieces. “Working with the caviar of cheese, the sky’s the limit,” he concludes. “It’s just one of those menu items that’s a trigger; customers see it, and they’ve gotta get it!”