Bruno’s Way: Chef Santo Bruno tells you what he thinks about pretty much everything. - PMQ Pizza Magazine 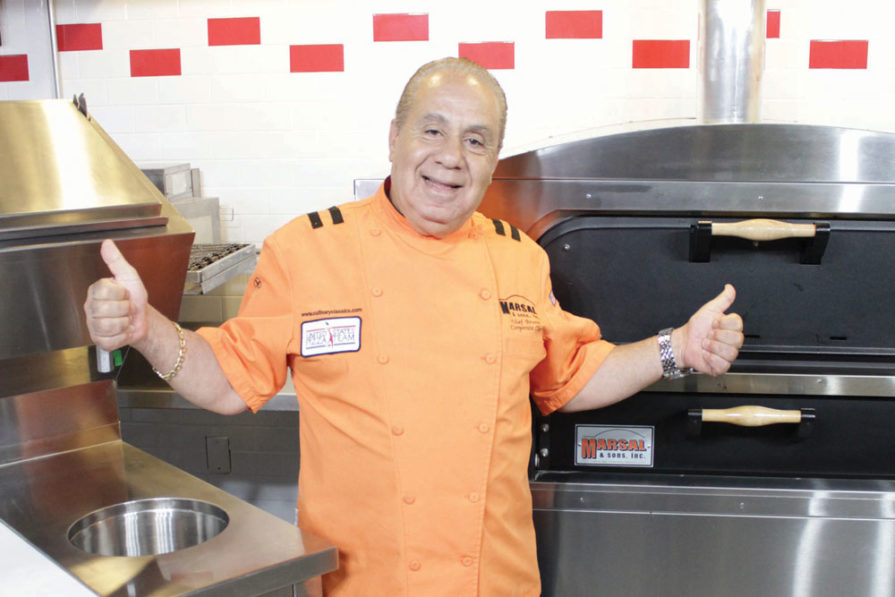 Chef Santo Bruno is not a tall man, but he’s one of the giants of the pizza restaurant industry. A Palermo native who grew up on the mean streets of Brooklyn, he’s Sicilian through and through—built like a bull, tough as an ox, but big-hearted, too, with an impish sense of humor and a love of mischief. And when he’s not crooning some old Italian tune or flirting with the ladies, he’s telling you what he thinks about pretty much anything and everything. After 50 years in the pizza business, both as a veteran operator and as corporate chef for Marsal & Sons, the man is not afraid to speak his mind.

“What I see out there now, I don’t see pizzas anymore,” says Bruno, an avowed traditionalist. “You’ve got pizza with cream, pizza with rabbit, pizza with caviar for two thousand bucks in New York City—it’s out of control. Pizza is cheese, tomatoes, pepperoni, maybe mushrooms, onions, anchovies. Today you mention anchovies, and people say, ‘I don’t want no anchovies!’ [They want] apples and bananas and chocolate. It’s just out of control.

“I’m the type of guy, I like to do things the old-fashioned way,” he adds. “If it works for me, leave it alone.”

And Bruno’s way definitely works. By his count, he has owned or co-owned 35 restaurants and helped countless other entrepreneurs launch pizzerias around the country. He has also cooked for former U.S. Senator and Secretary of State Hillary Clinton and made appearances on The Food Channel, the History Channel and Martha.

As the youngest of 10 siblings, Bruno immigrated with his family to the States in the dark days after World War II. “We came to America to have a better life,” he recalls. “Right after the war, there was nothing in Europe. No way my father could have fed 10 kids. So everybody came to this country. I was seven years old. We landed in Brooklyn with all of the Italian [immigrants].”

Bruno grew up on Knickerbocker Avenue, a rough-and-tumble neighborhood with strong Italian roots. He washed dishes and learned to cook at after-school jobs in local eateries. By 18, the streetwise youth was ready to launch his own pizzeria. But in those days, particularly in Brooklyn, the rules for starting a restaurant were a little different. “You didn’t have to use your own money,” Bruno notes. “You went to the cigarette machine vendors and the jukebox owners and the soda vendors, and they would lend you money. You’d go to the food suppliers, and they’d lend you money, too. How did you pay these people back? You installed their machines [in your restaurant], and they’d keep all the profits [instead of the usual 50/50 split]. The food supplier would charge you a little more on the cheese or tomatoes—you couldn’t complain, and you had to guarantee you’d stay with them for eternity.”

A soda cost a nickel in those days, Bruno points out, and a slice went for 12 cents. “There were no sandwiches, nothing like that at the time. A guy would come in every morning and say, ‘How much cheese do you need today?’ ‘Give me two blocks.’ You used all that cheese, and you were done for the day. You didn’t buy $6,000 worth of food every morning. You didn’t need $200,000 [to start a restaurant]. I opened my first store for $7,000. It was the old-school way.”

“You Got a Problem, Call Bruno”​

Bruno underwent formal training at the prestigious Culinary Center Scuola Alberghiera in Palermo. As he learned and matured in his trade, corporate America caught wind of his growing reputation, and he eventually went to work for the Welbilt Corporation, which later purchased the Garland equipment company (now part of Manitowoc Foodservice). He became one of the country’s foremost authorities on pizza ovens and moved in 2002 to Marsal & Sons, a cutting-edge manufacturer of gas, brick and electric pizza ovens for the restaurant industry. As the company’s corporate chef, he’s also its roving ambassador, jet-setting from coast to coast, offering turnkey solutions to restaurateurs, providing menu development consultation and helping pizzaioli fulfill their dreams of financial independence. “You got a problem, call Bruno,” he says, with utmost confidence.

One common problem he encounters is poor oven maintenance. Too many operators fail to maintain their pizza ovens, he says, and live to regret it. “It’s always breaking down on a Friday night because you don’t take care of it,” he says. With that in mind, Bruno shares some tips about oven selection and maintenance:

Versatility counts. An oven that makes only pizza may not be productive enough for your operation. “You want an oven that not only does pizza but [handles] roasting, baking, bread, even your breakfast,” Bruno says. “I cook pasta in the oven. People don’t believe it, but I do.”

Maintenance matters. Treat your oven like you’d treat your car. “Make a deal with your service company to come in and check your ovens every two months,” Bruno advises.

Understand your thermostat. Get the thermostat calibrated in order to ensure the best performance from your oven. “Just because you set it at 500°, it’s not necessarily cooking at 500°,” he notes.

Keep it clean. If you don’t want your pizza to taste like old tennis shoes, clean your deck oven every day. “Use the vacuum cleaner to get rid of the dirt and soot, and clean the orifice where the gas comes in,especially if you use propane,” Bruno says. “The chimney, the stack where the smoke comes out—keep it clean. People don’t do that. They wait until it breaks down, then they have to pay through the nose.”

Stay salt-free. Although some may recommend salt as a natural cleaning agent, using it on your pizza oven would be a mistake, Bruno warns. “Salt will eat the metal out, and everything will fall apart. Don’t use seltzer water, either. Scrape it, brush it and wipe it with a wet rag. That’s it.”

Bruno splits his time between New York and his home base in Tampa, Florida, where he has operated several pizzerias over the years, including Al Bruno and Bellisimo Ristorante. A dedicated family man, he made his new home in Florida after meeting his second wife, Susanna, there. He has three grown children (Louis, Tanya and James) and maintains close ties with his brothers and sisters, all of whom are good cooks, he says. His oldest brother, Jack, is a master chef in Italy and once cooked for the late Libyan strongman Muammar Gaddafi. “I’m still learning from Jack,” Bruno says.

And other pizzeria operators are still learning from Bruno. He believes good customer service is the best marketing strategy, and he stresses it everywhere he goes. “Treat people right,” he says. “Make them feel at home. Give them a glass of wine while they’re waiting. Don’t curse at them. Tell them how great they look, how beautiful they are. Make them your friend. Don’t forget their names. This is the best marketing.”

It may sound like common sense, but Bruno knows that too many operators ignore these basic cardinal rules. “Everybody claims to be the best,” he says. “To me, the guy who’s the best is the guy who rings the register the most. If he’s making more than me, he must be doing something right. You know who makes the best pizza by who makes the most money.”