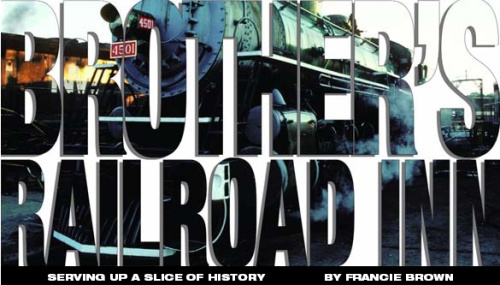 In a small town called Independence in the southeastern corner of Kansas a new family-owned restaurant, called Brother's Railroad Inn, is serving pizza in the "old way" while surviving in a world of large pizza chains and modern technology. 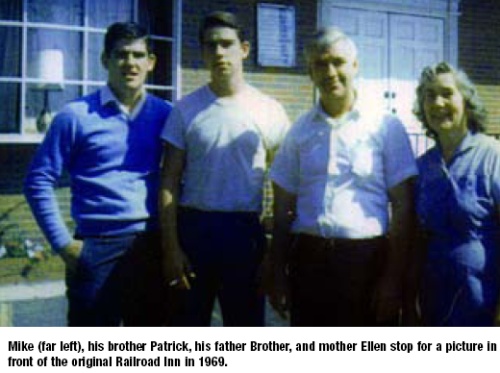 The owner, Mike Conway, told me that the restaurant is both a family tradition and a way for him to educate his neighbors on family restaurants.

Mike has lots of experience with family-owned restaurants. He grew up working in a family restaurant, the original Railroad Inn, started by his grandfather and father in Bowie, Maryland in 1950. The original store only served soup, sandwiches, seafood and a few other entrees. The restaurant started offering pizzas in 1961.

Although the original restaurant was a large success, Mike said that as a small-town pizza operation (the town's population is 9,000), he has to have a quality product or he loses his customers to the larger, chain pizza stores in the area. They make everything in-house as well as offering a wide variety of Italian meals as an alternative to pizza. For the pizza, Mike buys the freshest toppings he can find, the dough is made daily and he is a firm believer that Baker's Pride deck ovens have a better bake than conveyor ovens.

Like any other restaurant, there are occasional "goofs" in the orders. Mike told me that they handle these goofs one way only. "We're not going to get rich doing this, but we have a policy here that if someone orders something that they don't like, they won't have to pay for it," he told me. "We concentrate on the old way of doing business. If something isn't right, then we take care of it."

To demonstrate the "old way of doing business," and an historical aspect of the restaurant, Mike told me about their menus. "On the wall, we have five menus framed. One of them is the original menu from 1961. If I see someone looking at it and I find out that they have ordered a pizza, I give the pizza to them for the 1961 price."

The 1961 menu is just the first of his "surprise" offers. When children come into the store, he invites them behind the counter to let them watch their pizza being made, and sometimes even lets them make their own pizza. "For whatever reason, people, children especially, find the restaurant business fascinating," Mike told me. "We invite the kids back, have them wash their hands and point them in the right direction. The kids love it – they get to see the 'back end' of the operation."

To jump-start his business, Mike advertised in newspapers, on the menus of local motels and through e-mail. "We ask all of our customers to fill out a card at the waitress station that asks them for their information and e-mail addresses," Mike told me. "At the bottom of the card, we have a check that asks permission to e-mail them the current specials. We won't send anything out to someone who doesn't want it." As a thank you to the customers, Mike also sends out birthday cards and Christmas cards.

However, not all of his advertising ventures turned out well. He doesn't recommend a radio spot, simply because it doesn't seem to do anything. "I advertised with the radio station once and didn't get much response," Mike told me. "When the guy from the radio called back, I asked him if he could smell, taste, or see my pizza in one of his ads. When he said 'no,' I told him that I could take the $500 or $600 I was spending on the radio, and give that amount of pizza away, and do just as much good, if not more, for my business." Since that radio ad ran, Mike has done just that. Every so often, he sends free pizza out to businesses and events, just to get people to sample his product.

Before the business opened, however, Mike had several hoops to jump through – not the least of which was financing the business. He ended up approaching two different banks for financing. The banks didn't want to loan him the money because of the high rate of failure in the restaurant business. Two things finally won one of the banks over – Mike's business plan and his family's successful history in the restaurant business. One of the banks even told him that his business plan was one of the most professional business plans that they'd ever seen.

"In our business plan, we didn't want to over inflate our profits. We wanted to show that the restaurant could support itself," Mike told me. "We broke everything down – how much was rent, bills, supplies and loan payments for the restaurant. We got it down to the point that we knew how many pizzas and subs we needed to sell on a given day to break even." 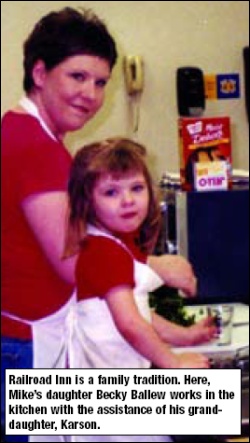 Mike went on to say that they don't always make that break-even point on a given day, but that sales from other days generally make it up. "My wife, Marcia, and I haven't drawn a check out of it yet," he told me, laughing. "We're not in the business to get rich quick."

One of the things that the bank did like about his business plan was some of the innovative ideas Mike had about the restaurant. His plan was to not focus solely on the pizza, but to market a wide range of products, some food, some not. He wants to move into Take and Bake and frozen pizza markets and is currently in the process of creating a trade/service mark to put on t-shirts and a line of salad dressings to be sold to the public.

He also told me that the bank wanted him to do a few things that he had not wanted to do. "The bank wanted me to serve lunch and deliver pizza. We have just recently started serving lunch, but we chose not to deliver the pizza for quality, insurance and safety issues." 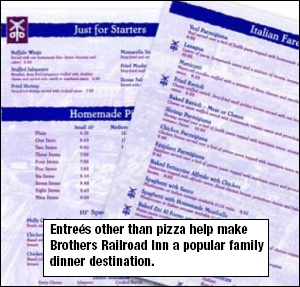 Mike spread the word of his new restaurant mostly by word of mouth. Long before the renovations on the building began, he was spreading word of the upcoming opening of Brother's Railroad Inn to family, friends and people with whom he came into contact.

In May of 2003, the restaurant was finally complete. Mike staged a soft opening for the three days before the "official" opening. Each night, he invited friends, family and the building contractors that worked on the restaurant to come and sample what they had helped create. "Opening that way allowed us to work the bugs out of the machinery, of which there were several but because everybody was friends, it was no big deal."

On actually opening, Mike said that finding labor and working out labor schedules was the hardest part in getting the pizzeria open and running. "We'd planned for such a long time that the actual business side of the restaurant wasn't a problem."

In the future, Mike hopes to one day franchise the business. For now though, he wants to keep the business on the small scale for two reasons. The first is, of course, a money issue, and the second is that he's content to prove that the business can be run on a less expensive level than the large pizza chains. "I'm trying to prove that a small business can be opened without the enormous fees that go along with the large franchises," Mike told me. "I know people with these great dreams that have the drive and capability to something great but can't do it because it's too expensive. I'm trying to change that, at least a little bit." Thus far, he's found that even on a small scale, franchising is expensive; however, he is working on possible alternatives.

Despite future plans for expansion, franchising and marketing, Mike is determined to keep the family atmosphere of Brother's Railroad Inn intact. As a family business, Railroad Inn spans several generations. Mike is the third generation to be involved with Railroad Inn, Pat Conway and Becky Ballew, his son and daughter, are the fourth, and he looks forward to his grandchildren helping out in the restaurant one day soon, like he did in his father's store. As it is now, his grandkids and their friends are some of the children that he invites to make their pizzas and "help out" in the back.