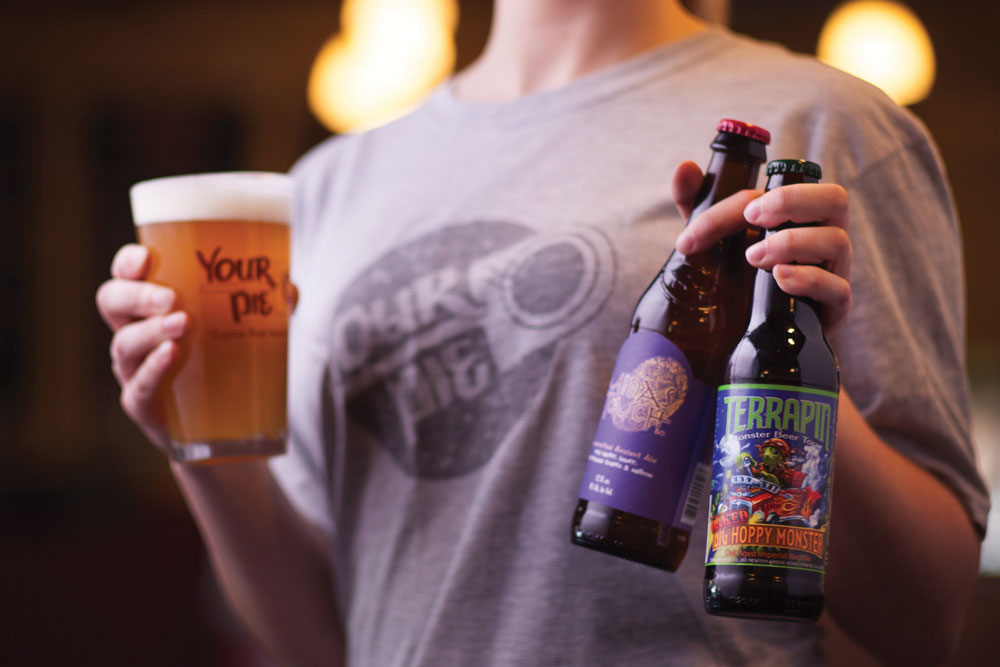 Beer, like pizza, remains a perennial American favorite—and it just so happens that the two go hand in hand. Even better, beer—particularly craft and draft brews—can be highly profitable in the pizzeria setting, all while satisfying today’s customer demand for variety and local options. Are you maximizing these profits at your pizzeria? Experts share eight can’t-miss ideas for making your beer program an even bigger success.

Local breweries have a lot in common with many independent pizzerias, offering fresher, greener products that keep money in your community, says Matt Simpson, owner/founder of The Beer Sommelier in Atlanta. He advises focusing your program on local beers, working with wholesalers to provide and choose the best options for your pizzeria. “Local breweries offer year-round styles from light to heavy—something to please everyone—and their seasonals are also a hit with customers,” he notes. “Customers are more likely to try them and spend more for them, and local breweries are more likely to offer deals on kegs, meaning that a local draft pitcher may not cost much more than a national brand.”

At Atlanta-based Your Pie (yourpie.com), with 21 locations in the Southeast, founder Drew French focuses on craft beers as part of his company’s core. Local brews pair well with French’s high-end pizza ingredients, and partnerships with area breweries allow both parties to cross-promote within their fan bases. “We help promote local breweries, and they in turn provide us with unique beers while helping promote us,” French says. “It’s all about partnering in your local market and building those relationships. Local breweries are also great about supporting events in the pizzeria—for example, by sending people to educate our guests and staff about their beers.”

Many pizzerias with successful craft beer programs host “tap takeover” events, partnering with a single local brewer for an evening to offer only that company’s beers on tap. Your Pie’s various stores have hosted more than 50 such events so far, often drawing up to 75 customers for unique beer tastings and pizza pairings. Meanwhile, 10 locations have hosted an “Old Beer, Stinky Cheese” night, partnering with Delaware-based Dogfish Head brewery to offer its rare beers paired with unusual cheeses. Additionally, the pizzeria will offer flights of a certain brewery’s styles to encourage sampling and pique guests’ interest.

Slice Pizza & Brewhouse (slicebirmingham.com) in Birmingham, Alabama, takes a similar approach. “Partnering with craft breweries for tap takeovers helps to promote new products coming to the market, while bringing the loyal following of that brewery into your restaurant,” notes Slice co-owner Jason Bajalieh. “For example, Grayton Beer Company recently launched in Alabama, so in December, Slice featured all Grayton beers on tap, which promotes the variety of beers offered by that brewery and gives customers a chance to try something new in the craft beer world.”

3: Get creative with to-go.

Recently, Slice started selling growlers to go as a way to further its craft beer business. The pizzeria partnered with Trim Tab, a local brewery, to design and create the pizzeria’s branded 64- and 32-ounce reusable containers. Customers love being able to purchase to-go pizza and a great brew accompaniment, so these add-ons offer both convenience and extra profits. The addition of off-premise sales took the pizzeria a few months to achieve, from the city’s approval process to working through logistics and creating the growlers, but Bajalieh says Slice is the only restaurant in town with this option, adding to its must-visit status for local beer lovers.

4: Bring in the experts.

If possible, invite representatives (such as head brewmasters) from craft breweries to visit your pizzeria and educate guests and servers, Simpson suggests. The reps will appreciate the chance to promote their product (and try your pizza), while customers will crowd in to hear insider info about the beers they love—or are eager to sample. “Even larger craft brewers from out of state often visit markets where they are newly distributed, so be sure to build those relationships and ask for appearances,” Simpson advises. “Just like in a casino, the more you can get customers in and keep them there, the more the odds are in favor of the house!”

Your Pie locations in Savannah, Georgia, have partnered with a local organization called Brew, Drink, Run, a group of homebrewers who run for their health and enjoy beer for pleasure. These groups attract passionate beer lovers, and most beer lovers also love pizza. Give them a reason to come to your pizzeria—or, even better, to hold their regular meetings there—and you’ve got a bunch of new regulars who will bring their families on other occasions. They’ll also be quite vocal about promoting special beer-centric events at the pizzeria through their websites and social media.

6: Teach your waitstaff to teach your guests.

Other types of pairings can also boost beer sales—specifically, suggested beer pairings listed on your menu or ready to roll off servers’ tongues. Slice lists suggested beer pairings directly on its menu for each pizza, while Your Pie created a “pairing wheel” of different beer styles with food suggestions—such as a porter with gelato or a pilsner with the Thai Pie—for both servers and guests. Make sure that your staff is up to date on everything you offer; they’re the ones who will be helping customers decide on beer purchases, and if they aren’t knowledgeable, sales will suffer. “A server will upsell extra beer by virtue of his knowledge, so staff education is so important,” Simpson says. “Servers and bartenders must know how to answer questions. They’ll be more trusted by patrons, and they’ll sell more beer. They don’t have to know everything, but they should know more than the average customer.”

With this promo, customers purchase an oversized mug (or can work their way up to getting one free by buying a certain number of beers) bearing your pizzeria’s logo. When they bring it back, they get larger pours (such as 16-ounce instead of 12-ounce). It’s a huge incentive for beer lovers to drink more beer, and it works! Give them first dibs on special or limited-time beers at your pizzeria, too.

Simpson points out that email lists are imperative for connecting with your beer loving customers. “Alert them about new beers coming up, including seasonals and special releases, and they’ll begin to look forward to those updates,” he advises. “These limited releases have a ‘get it while you can’ allure that sells more beer—and food.”

Meanwhile, Your Pie wisely uses social media to keep its fans abreast of new beer offerings, which are constantly evolving to accommodate new selections, enticing customers to return more often. “In addition to in-store signage and chalkboards, we’re very active on social media to let people know what’s new on tap,” says French. “We’ll even post pics of the new tap handle or beer with the updates. It’s all about educating the customer!”