No Matter When You Eat It, Pizza Is the Breakfast of Champions - PMQ Pizza Magazine 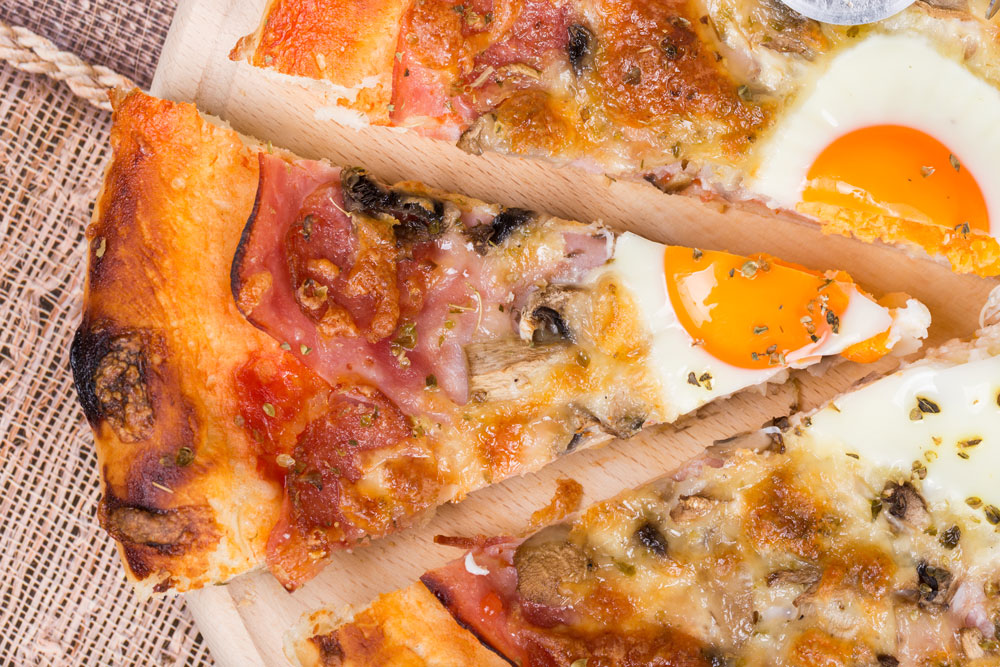 Cold pizza for breakfast has long satisfied legions of hungover college students with its hearty, comforting, cheesy goodness. But over the past 30-odd years, more traditional breakfast items, both savory and sweet, have found their way onto pizza crusts. In fact, the trend exploded at the beginning of this decade: According to Technomic, breakfast pizza was the fastest-growing breakfast item in the second half of 2010, even outpacing scrambled eggs and bagels.

“[Our breakfast pizza] is one of those pizzas that, when people see it in the window, they say, ‘What’s that?’ Then, when they eat it, they sit there with their mouths agape.”

While the origins of breakfast pizza are fuzzy, Marietta John, owner of Bucketcake, a cake-to-go company in Perwick, Pennsylvania, claims to have invented it at some point in the early- to mid-1990s. According to her blog, John hit upon the idea while working at Itza Pizza on the Bloomsburg University campus in Bloomsburg, Pennsylvania. While pondering unusual ingredients that could be incorporated with a pizza, she scrambled some eggs one day and spooned them onto a crust. “Mmmmm, I invented breakfast pizza!” she wrote in the blog. She added ham and cheese the next time, then sausage, onion and peppers. When her boss saw the pies, he summoned her upstairs to his office. She feared she would lose her job, she said, but, much to her surprise, he praised her for her creativity, saying, “Good job!” Thus, the breakfast pizza (or at least one iteration of it) was born.

Pizza Made for Mornings

Whatever its true origins, breakfast pizza is now almost as commonplace as Cap’n Crunch. If it’s on a breakfast menu, chances are, someone has slapped it on a pie. Little Dom’s, located in Los Feliz, California, offers a bagel-style breakfast pizza with smoked salmon, crescenza cheese, capers and red onions. Wolfgang Puck’s pizzeria in Chicago’s O’Hare airport serves a breakfast pizza to ease those dreadful early-morning departures. And London’s Yard Sale Pizza even features a haggis pizza, based on the Scottish breakfast staple, with mozzarella, cavolo nero (lacinato kale), and black chili jam thrown in for good measure.

In fact, the internet is chock-full of recipes for any kind of breakfast pizza one can imagine, from a sweet apple streusel pizza to tater tot pies—and everything in between. Frozen pizza manufacturers have also gotten in on the act: Red Baron, Schwan’s, Mama Cozzi’s, Bellatoria and Palermo’s all offer frozen breakfast pies. Tony’s even sells a pie topped with sausage and country gravy.

Mert Sunnetcioglu, proprietor of Mia Mia’s Pizzeria in Providence, Rhode Island, serves a breakfast pizza dubbed Ralf’s Hangover. Featuring ham, sausage, bacon, mushrooms, cherry tomatoes and scallions, it’s topped off with sunny-side up eggs. Sunnetcioglu slices the pizza in such a way that the eggs are left intact, allowing the customer to perforate each egg with a fork so the gooey goodness of the yolk drips over the slice. Served all day and night, it’s one of Mia Mia’s more popular pies. “On the weekends, we probably sell 20 to 25, or seven or eight pizzas each weekday,” says Sunnetcioglu.

Dimo’s Pizza in Chicago serves up a Southern-inspired pie that incorporates a breakfast staple—the chicken and waffle pizza. Featuring a white sauce as the base, it’s piled with fried chicken and waffles made with Old Bay seasoning, plus green onions, cheddar cheese, and a drizzle of habanero- and orange-infused honey. Stephen Hofstad, Dimo’s culinary coordinator, says they are constantly tinkering with the pie’s recipe. “This current incarnation of the pizza has been on the menu for two years,” he notes. “We’ve done a couple different variations. We’ve used a bourbon-infused maple syrup, and we’ve even tried a smoked syrup.

Related: IHOP invents its own version of the breakfast pizza (sort of).

So put down the cereal spoon. Ditch the biscuit. Forgo the yogurt. Pizza is the real breakfast of champions.

Bill DeJournett is a regular contributor to PMQ.