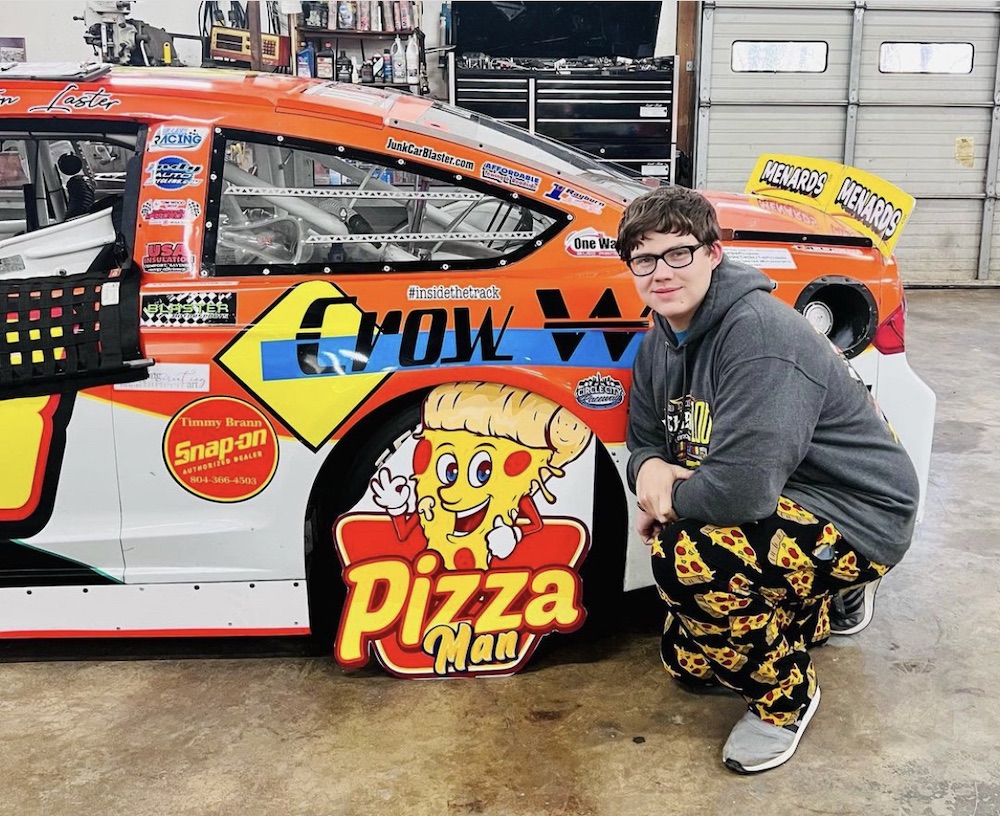 If there’s one thing Brayton Laster loves as much as race car driving, it’s pizza. The Greenwood, Indiana native has combined these two passions in his motorsports career and is building a name for himself as the “Pizza Man” of NASCAR, complete with a slice-themed racing helmet that has become his trademark.

Now all he needs is a corporate sponsor in the pizza industry to complete the pizza package.

Laster made his NASCAR Camping World Truck Series debut in June. On February 18, he’ll compete in the opening race of the ARCA Menards Series season at Daytona International Speedway and in the third race of the year at Talladega Superspeedway on April 22.

In his middle-school days, Laster sported a pizza-themed backpack to school and never missed a chance to grab a pizza slice while racing go-karts at the Indianapolis Speedrome, which helped him earn his nickname. He is known for sporting pizza-themed attire, including ties, pants and shoes. His Pit Road sign even features a smiling pepperoni slice with the words, “Pizza Man.”

“I became known as the pizza kid throughout school and racing,” Laster, who is now 20, told News from the Pits. “It kind of became more of a personality trait than anything. I want to be known for something that makes me unique but also makes me approachable, and everybody can relate to pizza.”

As a kid, Laster watched his dad, Dane “Bartman” Laster, racing Outlaw Figure 8 cars and wanted to follow in his father’s tracks, so to speak. He started racing go-karts at the age of eight and eventually moved up in the Roadrunner division. In his first Roadrunner race, he finished in eighth place against adult racers.

At 15, he started racing dirt late models and was named Rookie of the Year at Brownstown Speedway.

According to his website, Brayton made feature starts in 2021 in the Lucas Oil Late Model Dirt Series, World of Outlaws Late Model Series, and the Ultimate Heart of America Super Late Model Series in addition to other touring series. He recorded a third place run in points at Richmond Raceway in Richmond, Kentucky, and a 3rd place in points in his first attempt of running a full touring series with the Ultimate Heart of America series.

Last year, he finished 13th at Daytona in his national series debut with Mullins Racing and finished 26th at Talladega after a wreck threw him out of the top 15.

Also in 2022, Laster and his family founded Drive for Humanity, a nonprofit focused on homelessness and hunger issues. “Indianapolis is a big homeless area,” he told Speedway Digest. “I’ve always kind of had a soft spot, especially this time of year when it gets really cold. We always go out and hand out food. We’ll give them gloves and sweatpants.”

Racing sponsorship has been a popular form of marketing since the early 20th century, so it’s no surprise that Laster would like to attract a corporate sponsor from the pizza industry. He also employs more high-tech marketing tactics, including a robust and fast-growing social media presence.

“The plan is to get Brayton in at least six to eight more ARCA races this year, but, honestly, a lot of that depends on funding,” Dane Laster told PMQ. “The rest of those races would be based on the preference of our marketing partners. For example, I know that a lot of the big pizza companies seem to be out of the Detroit area, so they may like to see Brayton compete at the Michigan ARCA race since it is close to them and the executives could come out to watch.”

Are you listening, Buddy’s Pizza and Little Caesars?