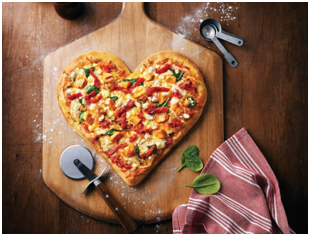 In an effort to aid in the fight against childhood hunger, Boston’s Restaurant & Sports Bar (Boston’s) is hosting its 16thannual Boston’s Cares fundraising campaign from February 3-23, 2014. During this time, select Boston’s locations across the United States will collect proceeds from the sale of Gourmet Pizzas in addition to guest donations for the Boston’s Pizza Foundation in support of Share Our Strength’s No Kid Hungry® campaign. The Dallas-based casual dining brand hopes to raise $40,000 for the national charity by continuing the tradition of offering Heart-Shaped Pizzas, which will be available from February 13-15.

“At Boston’s, we have a long-standing tradition of charitable giving and we pride ourselves on doing our part to help those in need,” said Troy Cooper, chief operating officer of Boston’s Restaurant & Sports Bar. “By partnering with an organization such as Share Our Strength and its NoKid Hungry campaign, whose goal is to eliminate childhood hunger across the nation, we know we are making a significant impact in the lives of people in our communities.”

At participating locations across the country, Boston’s will offer a variety of opportunities for guests to donate during the month of February. The restaurants will be providing the following ways to donate:

·         February 13-15: $1 from the sale of every individual, small and medium size Heart-ShapedPizza (these pizzas will be available to celebrate Valentine’s Day.)

Hunger is an epidemic that is threatening America’s future by preventing children from reaching their full potential.The No Kid Hungry campaign connects kids in need with nutritious food and teaches families how to prepare healthy, affordable meals. The campaign also engages the public to make ending childhood hunger a national priority.

“We are truly grateful for the support that Boston’s Restaurant & Sports Bar is providing to the No Kid Hungry campaign,” said Debbie Shore, co-founder of Share Our Strength. “More than 16 million kids in America are living in familieswhostruggle to put food on the table, but with driveslike Boston’s Cares, we are able to help provide themfamilies with the necessary resources to ensure their children receive nutritious food, every day.

Headquartered in Dallas, Texas, Boston’s Restaurant & Sports Bar offers a contemporary, sit-down family dining atmosphere with a separate sports bar customized with local team memorabilia. The result is a fun, high-energy setting for families and sports enthusiasts alike. While Boston’s specializes in gourmet pizza and pasta, its menu features nearly 100 items including salads, sandwiches, and a variety of sports bar favorites such as burgers, wings and ribs. With annual system wide sales approaching $1 billion, Boston Pizza and Boston’s have more than 390 outlets throughout the United States, Canada and Mexico. For more information on the Boston’s franchise opportunity, visitwww.bostons.com/franchising/ or contact VOGELD@bostons.com. For the latest news on Boston’s Restaurant & Sports Bar visit www.facebook.com/BostonsNational or follow Boston’s on Twitter at www.twitter/BostonsCorp.

No child should grow up hungry in America, but one in five children struggles with hunger. Share Our Strength’s No Kid Hungry® campaign is ending childhood hunger in America by ensuring all children get the healthy food they need, every day. The No Kid Hungry campaign connects kids in need to effective nutrition programs like school breakfast and summer meals and teaches low-income families to cook healthy, affordable meals through its Cooking Matters program.  This work is accomplished through the No Kid Hungry network, made up of private citizens, public officials, nonprofits, business leaders and others providing innovative hunger solutions in their communities. Join us at NoKidHungry.org.