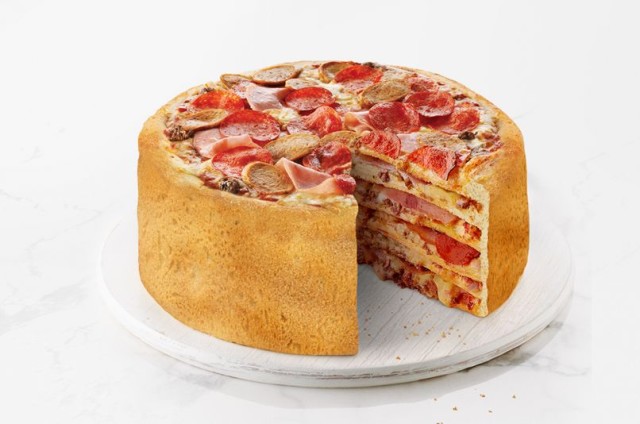 While celebrating its 50 anniversary, Canadian pizza chain Boston Pizza has unveiled its Pizza Game Changers, a marketing campaign that has spread like wildfire through social media, the blogosphere and even the mainstream news media. Customers can vote on their favorite innovations at pizzachangers.com, and Boston Pizza will create the ones that get the most support. Choices include pizza mints, a gas-powered pizza cutter, a pizza cake and a pizza car freshener, to name a few. The pizza cake—the crown jewel of the campaign—has become a hot topic in the pizza world and currently leads the pack in votes. We asked Perry Schwartz, director of communications for Boston’s Pizza, a few questions about the campaign’s origin.

PMQ: How did the idea of Pizza Game Changers come about?

Schwartz: Pizza Game Changers is part of our current national marketing campaign that features some really creative new menu items. In 2014, we are celebrating our 50th anniversary, and throughout the year we’re doing a number of different things to [commemorate the occasion] with our guests. Right now it’s all about sharing some of our game-changing pizza innovations like the Pizza Taco, Pizzaburger Sliders and The Calzono, a part calzone/part burrito wrapped in our pizza dough.

PMQ: How did you launch the campaign?

Schwartz: The campaign really started on April 1 (April Fool’s Day) when we announced that we were changing the pizza game again by launching “reverse delivery”—a service where we pick up the guest and bring them to the pizza. http://reversedelivery.ca/ The joke was supported by Tweets and Facebook posts as well as “real” classified ads online. Then, on April 7, we launched the current menu and followed on April 14 with a fully integrated TV and marketing campaign with social media and online advertising.

PMQ: Obviously, pizza cake has taken hold in the media’s imagination and has become the top game changer. When will it launch?

Schwartz: Right now our executive chef is very busy coming up with a plan for the potential of the pizza cake. Since this is our 50th anniversary, we believe it only makes sense that we’ll be blowing out the candles on a pizza cake at some point this summer.  Stay tuned.

PMQ: Pizza mints is number two and seems like a fun idea. Can you talk about how these ideas came about? Was it just off the top of someone's head or from customers?

Schwartz: The ideas for the innovations came from our advertising agency, TAXI Canada. They are extremely creative and clearly love pizza as much as we do.

PMQ: How has social media helped spread this idea?

Schwartz: Social media is imperative to our marketing mix and to helping communicate these initiatives while also building relationships with our guests. We don’t just push out content; we have conversations and share their content as much as ours. It’s a great relationship with our guests, and we love that so many of them are really getting engaged with Pizza Game Changers.

PMQ: Is this a one-time idea or something you will launch annually or on occasion in the future?

Schwartz: Anything is possible. Right now we’re focused on this campaign and really enjoying our 50th anniversary celebration of all things pizza.

PMQ: Can you give me a bit of background of when Boston Pizza was founded and how the company has grown?

Schwartz: Boston Pizza was founded in Edmonton, Alberta in 1964. Today, we are Canada’s number-one casual dining chain with 360 restaurants/sports bars across the country in every province.