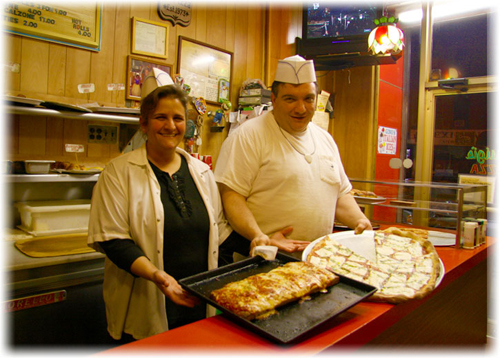 The debate about who makes the best New York-style pizza is never-ending, but five native New York pizza lovers describe the enduring elements that make old-school Big Apple pizza parlors magical in the pages of their new book.

NY1.com talks to two of the five authors of "The New York Pizza Project," which "documents the culture of the city pizzeria."  Corey Mintz and Tim Reitzes commented on their book at one of the pizzerias they profiled, Luigi's Pizza on Fifth Avenue, one of more than 100 New York pizzerias the authors visited in compiling their story of New Yorker's favorite food. They write from the viewpoint of the restaurants, their neighborhoods and the people who make and eat pizza. Mintz explains that the book's purpose is to help readers understand that pizza culture is "the heartbeat of the city." Luigi's, for example, has served the Park Slope neighborhood for 42 years. Reitzes says, despite his intense research sampling pizza,  he "can always have another slice."

Read and watch a video that offers more insight into this pizza-pointed exploration.