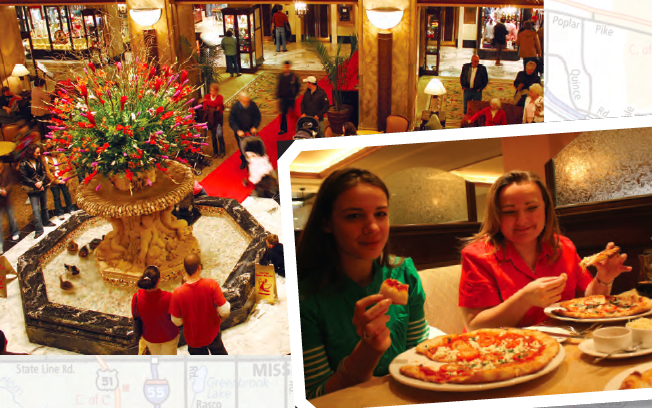 The Bluff City is known for many things: Beale Street, The King, blues music and barbecue. Our mission was to view all of Memphis’ glory from a pizza perspective. After strolling the streets of downtown and savoring slices at the gates of Graceland, we found that Memphis has yet another draw—great pizza!

Memphis’ Peabody Hotel is home to some of the most pampered ducks in the universe: Each day, they’re escorted from their rooftop palace down the elevator and across a red carpet to an awaiting fountain in the hotel’s grand lobby. After witnessing this must-see event, we headed to Peabody’s Capriccio Grill (www.peabodymemphis.com) and sampled a couple of individual gourmet-style pizzas—one Margherita and one with goat cheese and fresh Roma tomatoes. Extreme attention to detail made for a perfect first stop; even the pizza boxes sported an image of the Peabody’s ducks. 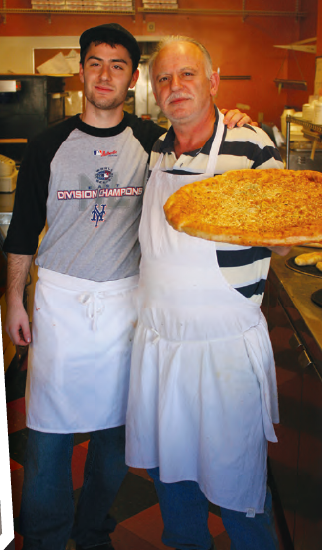 The South may have brought us the blues, but New York gave us first-rate pizza, so we stopped to grab some New York-style slices from father-and-son team Mike and Azem Papa at Little Italy Pizza, just down the street from Sun Studio, where rock-and-roll greats such as Elvis Presley and Johnny Cash got their start. Standing under the shadow of a giant Gibson guitar, we inhaled huge thin-crust slices and polished them off with a couple of garlic knots before heading to Graceland.

You can’t go to Memphis without visiting the home of The King. On our way to Graceland, we stopped at Exlines’ Best Pizza, (www.exlinespizza.com) just a couple of blocks from the famous gates. With 11 locations throughout the area, Exlines’ has been in business since 1973, and proudly displays photos of the accomplishments of its owners and employees throughout the pizzeria. Passersby honked their car horns in support of pizza as we relished the cheese-laden slices in front of Elvis’ former residence.

Our adventure continued with stops at some of the major attractions of the city: the Mississippi River, Main Street Trolley and the neon lights of Beale Street. After touring the sights, we arrived at our final stop, Spindini (www.spindinimemphis.com), with renewed appetite. Owner-chef Judd Grisanti greeted us and personally made our two pies—one lobster, one white—in the restaurant’s wood-fired oven. Perfect presentation and unique ingredients keep the reservation list full at this new Memphis hot spot, located on the Main Street Trolley line. 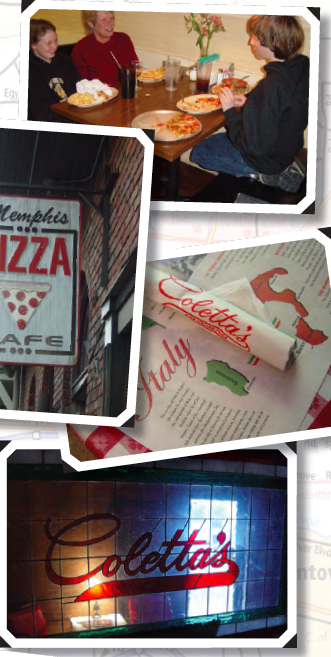 Written and photographed by Greg Giblin.

Since we had limited time and a trunk full of pizza boxes to contend with, our resident videographer, Greg Giblin, volunteered to return to Memphis with video camera in hand for a tour of some of the more well-known pizzerias in the area. Check out what he discovered and go to www.pizzatv.com to view the footage. Since opening in 1993, the Memphis Pizza Cafe (www.memphispizzacafe.com) has not only survived in the Memphis pizza scene, but has grown to open five stores in the area and has been voted Memphis’ Best Pizza every year since 1994. With a ‘no frills’ attitude, the pizzeria prides itself on a simple yet effective menu with classic thin crust pizzas, no delivery, and word-of-mouth advertising. Store manager Jon McNabb explains, “When it started, it just kind of took off.”

Coletta’s Restaurant (www.colettasrestaurant.com) lays claim to being the oldest restaurant in Memphis, getting its start in 1922 as an ice cream shop. Jerry Coletta, the current operator, says that his dad introduced pizza at Coletta’s in the ’50s—a time when pizza was virtually nonexistent in the Memphis area. But with the introduction of the fi rst barbecue pizza, Southerners were quick to give it a try (the BBQ Pizza is still the top-selling item at Coletta’s). One BBQ Pizza fan was Elvis, who dined at Colletta’s fairly frequently. Fans stop by regularly, requesting to eat in his old seat, now in the appropriately named Elvis Room, decorated top to bottom with Elvis memorabilia.

The proximity of the University of Memphis helped owner Mike Garibaldi get Garibaldi’s Pizza (www.garibaldispizza.com) off the ground and on the road to success more than 30 years ago. Starting with no prospects and little money, Garibaldi has now been serving families and the area’s student population for decades. Looking around the restaurant, it’s easy to see the connection—team mascots decorate the walls alongside various knickknacks, pinball machines and a jukebox. “We try to be a ‘Cheers’-type pizzeria and family restaurant,” says Garibaldi. “We know the customers by name and they know us. They might get razzed if they’re wearing a funny-lookin’ shirt that day,” he warns with a smile.