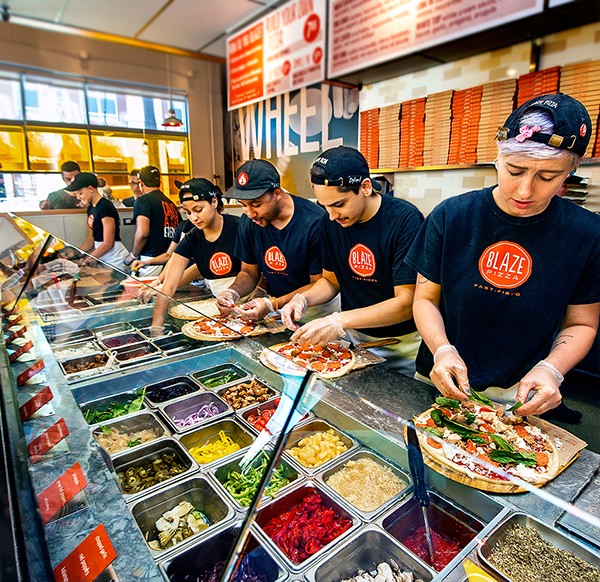 Blaze Fast-Fire’d Pizza, the nation’s largest and fastest growing build-your-own pizza chain, today announced that its 70th restaurant is set to open in March in the Dallas suburb of Frisco, TX.  The fast-casual pizza chain, known for its chef-driven recipes and casually hip restaurants, also announced that it has signed new franchise agreements that will add Denver and Portland to its expansion plans.  In total, the company now has agreements in place to open a total of 331 restaurants in 36 states and Washington, D.C.

The first Blaze Pizza restaurant opened in Irvine, CA on August 6, 2012 – just over two years ago.  In 2013, the company grew to 10 locations and began expanding beyond California.  Now, with the opening of its 70th location, Blaze Pizza will be operating in 17 states, including the major metropolitan areas of Los Angeles, New York, Chicago, San Francisco, Dallas and Washington, D.C.  Next year, the company is scheduled to open on average one new restaurant every five days – with its milestone 100th location projected to open next October.

“We lead the category in both number of locations and rate of growth,” said Jim Mizes, president and COO of Blaze Pizza.  “More importantly, we lead the category in defining the best overall guest experience – which includes exceptional pizza, lightning fast speed of service and appealing restaurant design.  We believe that our focused attention against these three key areas will help Blaze Pizza to not only differentiate itself, but also to deliver the highest average unit sales volumes in the category.”

Blaze Pizza® is a modern day “pizza joint” known for its custom-built artisanal pizzas, freshly made salads, blood orange lemonade and s’more pies.  Each restaurant features an interactive assembly-line format that allows guests to customize one of the menu’s signature pizzas or create their own, choosing from a wide selection of fresh, artisanal ingredients – all for under $8.  The generously-sized 11-inch pizzas are then sent to a blazing hot open-flame oven – the centerpiece of the restaurant – where dedicated pizzasmiths™ ensure that the thin-crust pies are fast-fire’d® and ready to eat in just 180 seconds.  Each restaurant makes its own dough from scratch using a recipe developed by critically-acclaimed Executive Chef Bradford Kent (“The Pizza Whisperer”), which requires a 24-hour fermentation period to produce his signature light-as-air, crisp crust.  For pizza fans with specific dietary needs, Blaze Pizza offers gluten-free dough and vegan cheese.

Described by Zagat as “One of 10 Innovative Restaurants in Los Angeles,” Blaze Pizza is developing a cult following as it expands across the U.S.  The prototypical restaurant is 2,400 square feet with seating for about 60 guests.  Founded by Elise and Rick Wetzel (co-founder of Wetzel’s Pretzels), the concept is backed by investors including LeBron James, Maria Shriver, Boston Red Sox co-owner Tom Werner and movie producer John Davis.  For more information, please visit blazepizza.com and facebook.com/blazepizza.