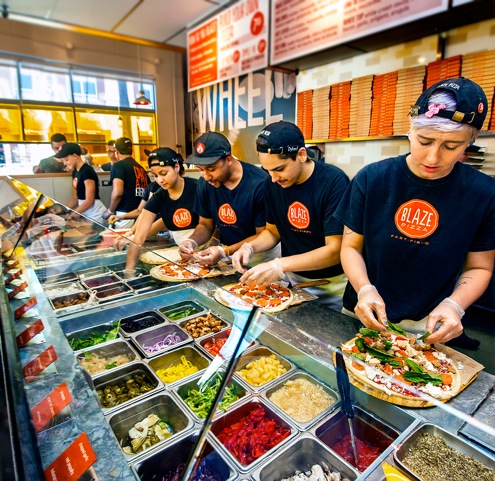 Blaze Fast Fire’d Pizza, the nation’s leading build-your-own pizza chain, today announced that it will open its 20th Southern California location on Thursday, October 23.  To celebrate the grand opening, the Gateway Shopping Center location will offer FREE build-your-own artisanal pizzas on Friday, October 24 between 11:00 a.m. and midnight to anyone who follows Blaze Pizza on Instagram, Twitter, or Facebook. The fast-casual concept, known for its chef-driven menu and casually hip restaurants, is located at Brea’s Gateway Shopping Center (103 West Imperial Highway), next to Corner Bakery.

Blaze Pizza is a modern day “pizza joint” known for its custom-built artisanal pizzas, freshly made salads, blood orange lemonade and s’more pies.  Each restaurant features an interactive assembly-line format that allows guests to customize one of the menu’s signature pizzas or create their own, choosing from a wide selection of fresh, artisanal ingredients – all for under $8.  The generously-sized 11-inch pizzas are then sent to a blazing hot open-flame oven – the centerpiece of the restaurant – where dedicated pizzasmiths ensure that the thin-crust pies are fast-fire’d and ready to eat in just 180 seconds.  Each restaurant makes its own dough from scratch using a recipe developed by critically-acclaimed Executive Chef Bradford Kent (“The Pizza Whisperer”), which requires a 24-hour fermentation period to produce his signature light-as-air, crisp crust.  For pizza fans with specific dietary needs, Blaze Pizza offers gluten-free dough and vegan cheese.  The new Brea restaurant will also feature a selection of wine and craft beer.

“Our mission at Blaze is really simple – we’re all about bringing the community a place where guests can connect, create and enjoy great pizza at crazy fast speed,” said Jim Mizes, president & COO of Blaze Pizza. “If you think about it, there hasn’t been a good way to enjoy a made-from-scratch pizza without the wait. Now there is. We believe this will be a game changer in town.”