Black Pizza: Going Over to the Dark Side - PMQ Pizza Magazine 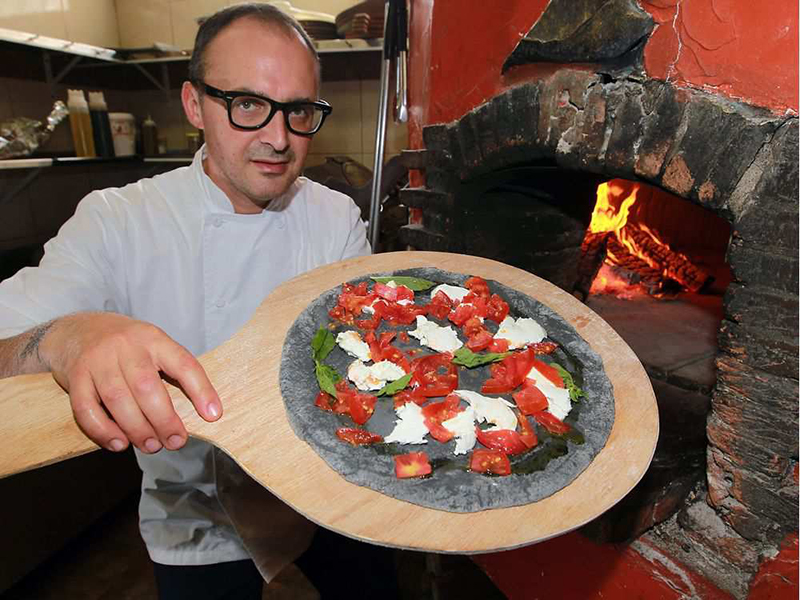 Black is the new black when it comes to pizza dough. So says Remo Tortola, the pizza maker at the Giovanni Caboto Club in Windsor, Ontario.

As The Windsor Star reports, Tortola recently explored the dark side of pizza when he introduced the Buffalo in Black, featuring buffalo mozzarella, cherry tomatoes and green basil laid out on a pizza made with black dough and topped with prosciutto after baking. Tortola said he discovered black-dough pizza while attending a pizza school in Venice, Italy last year. He said it’s the latest ploy used by pizzerias to distinguish themselves from their competitors. “When I saw it, I said, ‘Wow, what is that?’ I like it. It’s a cool idea.”

To achieve the black hue, Tortola adds food-grade vegetable charcoal in powder form to his dough mix—eight grams per one kilogram of flour. He buys the charcoal, which is a natural substance used for food coloring in cookies, breads and tiramisu, from an Italian supplier called Molini Spigadoro.

Molini Spigador claims the charcoal dust has some beneficial effects, too. It can supposedly be used to treat indigestion, intestinal problems and hangovers and can help lower cholesterol.

Tortola said the charcoal powder has no effect on the taste of the dough, although some customers imagine they can detect the difference. He said he plans to add the Buffalo in Black pie to his menu and customers will also be able to select the black crust for other pies as well at no additional cost.

Now if he can just convince customers that the black look isn’t a baking error. “When I took the pizza out of the oven, one guy—more than one, actually—said, ‘Oh, you burnt the pizza,’” he told the Windsor Star. “After so many years you doing the pizza making, you burn the pizza?’”