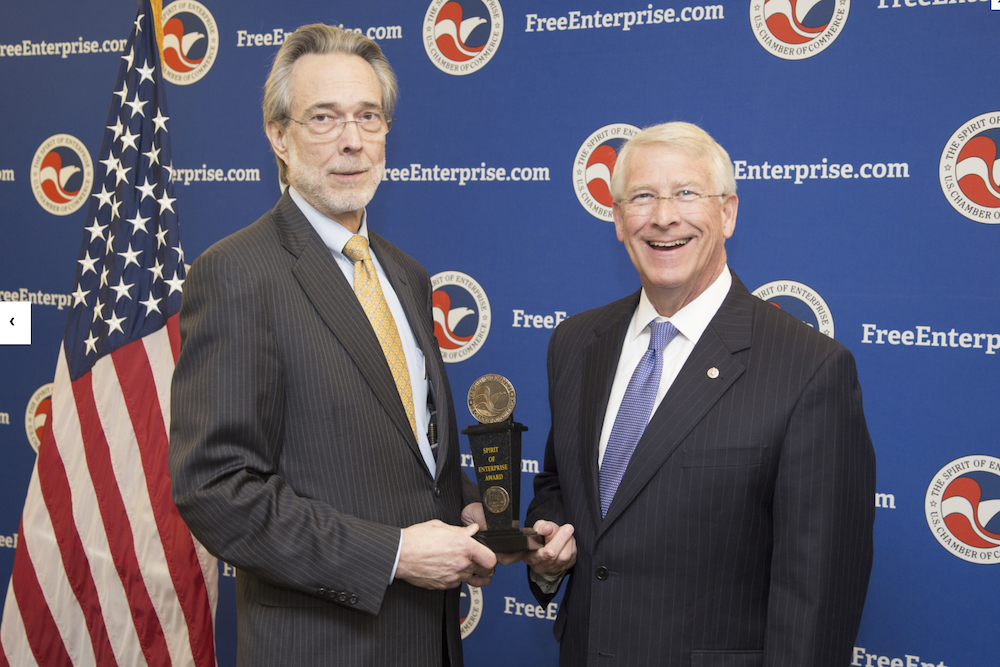 U.S. Sen. Roger Wicker (right), a key Republican supporter of the RESTAURANTS Act, is shown here receiving the Spirit of Enterprise Award from the U.S. Chamber of Commerce in 2019.

A bipartisan group of U.S. senators and representatives has resurrected the $120 billion RESTAURANTS Act in hopes that it has a better chance of passing the Senate under new Majority Leader Chuck Schumer.

The bill would provide direct targeted relief in the form of grants and other aid to restaurants and bars that have struggled since the pandemic began almost a year ago. It was reintroduced after a 90-10 vote in the Senate yesterday supporting a budget amendment that would establish a dedicated restaurant relief fund.

The RESTAURANTS Act would provide relief to foodservice or drinking establishments that are part of a group of up to 20 facilities. Owners could apply for grants of up to $10 million to cover eligible expenses retroactively to February 15, 2020, and ending eight months after the legislation is signed into law.

The bill includes several new provisions to help restaurants and their employees, including:

Senator Roger Wicker (R-Miss) was one of the bill’s early GOP supporters last year. In a press release on Friday, he announced that the RESTAURANTS Act is back on the table, with support from co-sponsors Senator Kyrsten Sinema (D-Ariz) and Representatives Earl Blumenauer (D-Ore) and Brian Fitzpatrick (R-Pa).

“The coronavirus pandemic continues to threaten the existence of many of America’s restaurants and the suppliers that support them,” Wicker said Friday in a press release. “Without additional targeted relief, many restaurants, especially small and independent establishments, may not survive the year because of state indoor dining restrictions. The RESTAURANTS Act would provide support to help these small businesses adapt their operations and keep their employees on the payroll as our nation works to finish the fight against COVID-19.”

The $120 billion figure falls far short of the $320 billion in aid the National Restaurant Association requested last year. But Sean Kennedy, executive vice president of public affairs for the National Restaurant Association, applauded the new proposal as “a light at the end of a long, dark winter for independent, chain and franchise restaurants that have been most impacted by the pandemic.”

“While many other industries have started to recover, the restaurant industry finished last year in a double-dip recession and with 2.5 million fewer jobs,” Kennedy said in a statement. “These grants will put even the hardest-hit restaurants on the path to economic survival.”

“Restaurants were the first industry to be shut down by the states and within days, we asked Congress for an industry-specific fund that would help sustain our uniquely social businesses, regardless of the sign on the door,” Kennedy said. “For nearly a year, the Association, our members, and hundreds of thousands of our grassroots advocates have shared our experiences with Congress. And they listened.”