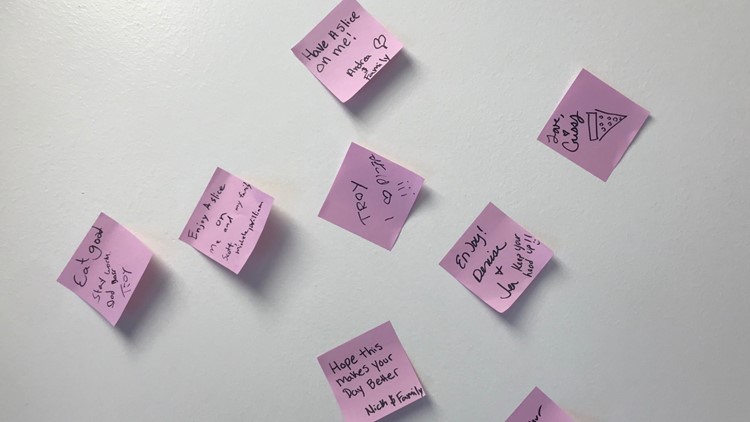 Customers can purchase slices for the hungry at Big Slice Pizzeria.

Big Slice Pizzeria, which recently opened in Toledo, hopes to keep the “pay-it-forward” movement moving forward even though the concept’s originator, Rosa’s Fresh Pizza in Philadelphia, closed down in April.

As WTOL reported this week, Big Slice Pizzeria lets customers buy slices for those who can’t afford to pay. For each $1 donation, a sticky note is posted on the wall, and any person in need can use one to buy pizza. “We just thought it was a nice thing to do,” co-owner Cristin Reno told WTOL. 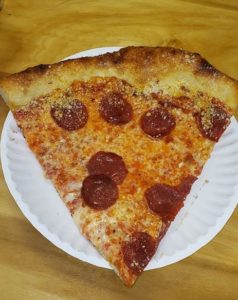 As Big Slice Pizzeria’s name implies, the New York-style slices are “massive” and ordinarily sell for $3 apiece. Reno said word of the offering spread quickly since the restaurant opened on Halloween, but the post-it notes have been going fast, too. Her goal is to fill the wall with notes for freebies. “We want to take Polaroids of everyone who pays it forward to add onto the wall and let everyone who could use a free slice know that they are welcome here,” Reno said in the WTOL interview. “People always write kind messages on the post-it notes, which makes it even more awesome for the customers who need some kindness in their lives.”

Rosa’s Fresh Pizza became so well-known for its post-it-note slices that Ellen DeGeneres gave owner Mason Wartman a check for $10,000 when he appeared on her talk show in January 2015. But Wartman had to close his flagship store in April—as well as a second one he opened in 2018—due to rising costs and heavy competition in Philadelphia’s East Market area. “I can’t compete against District Taco or Honeygrow or Wawa,” Wartman told the Philadelphia Inquirer.

Here’s hoping Big Slice Pizzeria can make it work in Toledo. According to the Toledo Blade, the city already “has to have the widest spectrum of styles of any city in America.”