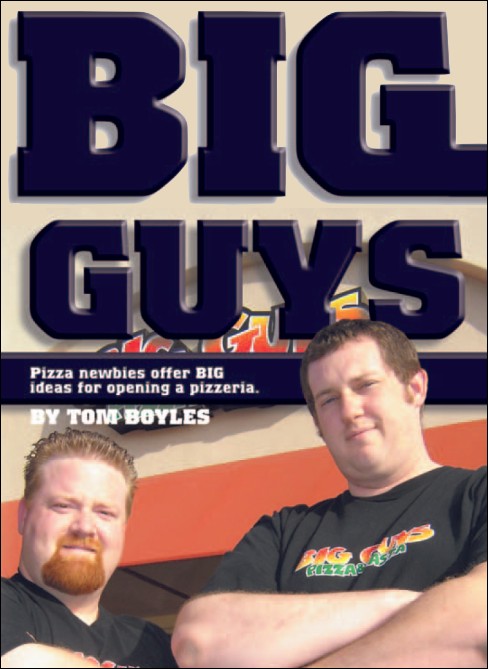 On a recent trip to California, I was tipped off about a new pizzeria in Moreno Valley Ranch called Big Guys Pizza & Pasta. They opened back in November, so I didn't think there would be too much to the story, but after setting up an interview and sitting down to talk with Sean Gargan and Dylan Baker, I soon discovered that these guys had some great ideas for opening a new location.

They did their homework beforehand and offer some great tips on opening a new restaurant, online ordering, catering and marketing. I also made a surprise discovery in talking to them about a company called Restaurant Alliance that is helping pizzeria operators learn more about marketing and programs that are out there and available. 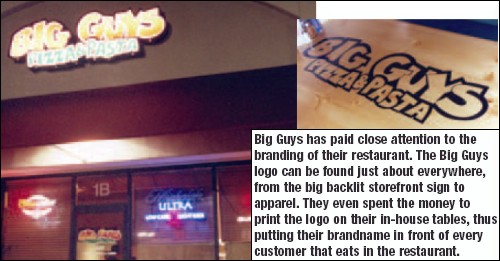 The Concept and Location Scouting

Dylan and Sean really put some thought into what type of pizzeria they wanted and where they would open it. "Both Dylan and I used to work in a pizzeria owned by Dave Bobbe called Boompas," Sean said. "He sold his place, and we decided we wanted to open our own restaurant. We started by scouting out locations. Someone mentioned Moreno Valley, but I didn't think too much about it until we drove out here.

"All I could see was construction, a shopping center and industrial complexes, so I started checking out the demographics with City Hall. I also contacted a Blockbuster video store and they shared some info. From this information I found out how many houses were here, about future construction and average incomes, which showed that it was an affluent area. The data showed that the area was going to double, so we chose this as our spot after several months of location scouting." 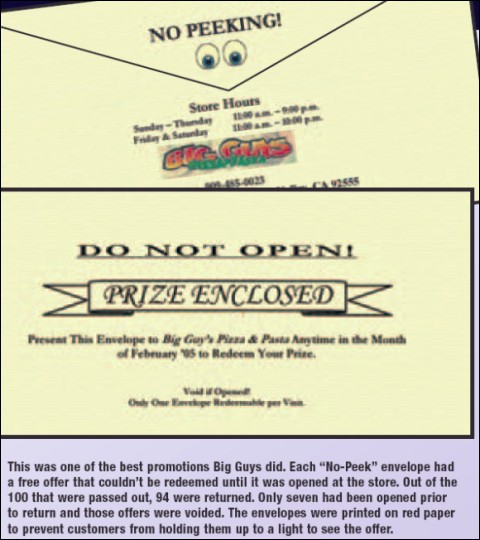 The Pains of Opening

While listening to them talk about opening, I asked if there were any lessons they could share about opening a new location. "Oh yeah, we learned some hard lessons," both said in unison. "The first thing we learned was everything was $5,000," Dylan said laughingly. "It was either $5,000 or multiples of $5,000. I guess what I am trying to say is be prepared to spend money if you want it done right. I would also suggest leaving things in the hands of the contractor, but be on-site everyday. We tried to subcontract some things out, but that turned out to be a bigger pain than it was worth. Let them do what they do, but be there to let them know when something isn't the way you want it."

Sean added, "We also learned that there are a lot of hidden costs. We were told that licenses were going to be so much, but found out there were extra fees involved in actually obtaining them. I suggest having a budget and plan on at least half that in overruns. One thing that happened was we agreed on a date we would start paying rent, but we went five months over that and were paying rent for three months when we weren't even open." 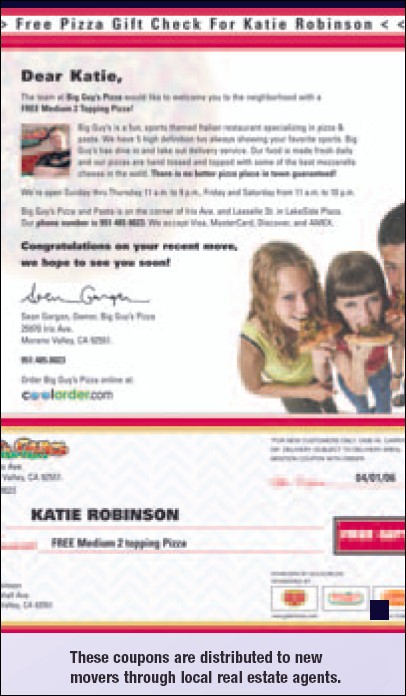 The Launch of Big Guys

"One thing that really helped in opening was actually being on-site," Dylan said. "People would come up and ask us about the concept, so it gave us a chance to explain what we were about. We also talked to the businesses around us, which led to orders from them when we opened. Kids would come up asking for jobs before we were open, so our labor pool was already started without having to advertise for it."

"Before opening, we were contacted by Monty Lockyear, Director of Sales and Marketing for Vistar, who wanted to use us as a test market for some programs they were launching," Sean said. "They put us in touch with Mani Sidhu of CoolOrder to set up online ordering, Mike Rasmussen, CPA with Franchise Tax Group to help with the books and tracking and Mark Sibilia of MyPizzaPromo for creating the print program and direct mail. We started doing mail drops prior to opening to get interest up, but because we were late opening, it started a little sooner than we expected. We did two drops a month of 5,000 each for about a month and a half before the doors opened. They looked real nice and I believe they worked. Next time, we will design in special orders that are exclusive to the mail drops so we can track their effectiveness better." 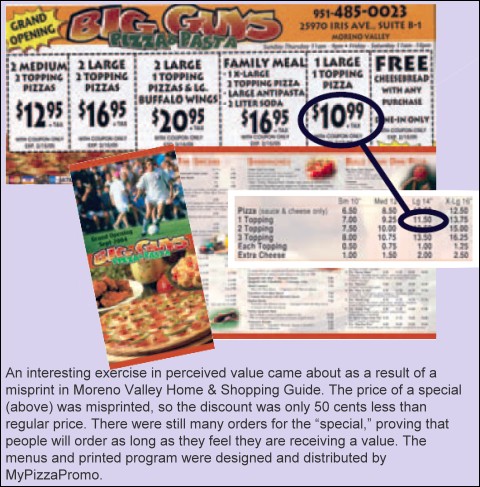 "Still, out of the gate we were doing great and did over $15,000 in the first two weeks of business," Sean said. "By the end of our first complete month we were over $60,000 and have been seeing increases each month." Currently, Big Guys is doing about $64,000 in sales per month. Takeout and delivery make up 70 percent of their business, while dine-in is about 30 percent." 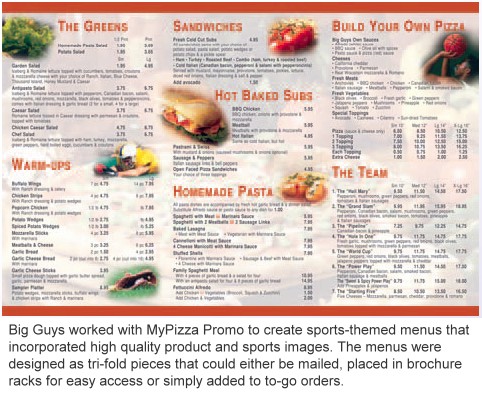 One of their promotions that has shown the best response is a No-Peek offer they did in January. "Monty came to us with this idea," Sean said. "We distributed No-Peek envelopes to 100 new customers who came in the store during the last two weeks of January. They had instructions to bring them back unopened in February to see what prize they had won. If the envelope was opened, the offer was void. Inside, we had free pizzas, breadsticks, sodas and discounts. We got back 94 of 100. Seven of the 94 had been opened, so they were not given the offer inside. This is a fun promotion that had a huge redemption rate, and we will be doing it again." 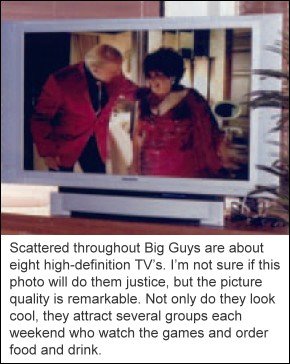 "We knew from our scouting that there was a lot of untapped business with the warehouses and hospitals," Sean said. "We specifically targeted the hospitals. I went in with our menus and some fliers and distributed them to the nurse's stations, around the emergency room and with receptionists. None of the material really offered discounts, they just let them know who we were and what we offered. We did this with some of the warehouses and industries, too. It turned out to be a good move, and now we get a lot of orders, especially from the hospital emergency rooms. A couple of the industrial locations have contacted us about doing some catered events."

One of the new ideas they told me about concerning catering was how they contacted a local wedding planner and offered to work with him. "We are trying to work with more wedding planners and florists because they are asked about catering while talking to clients," Sean said. "For weddings, we do nicer stuff. Anything they request, we can make it. A lot of the time, people just want pastas, but we also offer packages with pizza and salads. We price it per person and the price depends on if they pick it up, if we have to deliver and if they want plates and utensils."

A school group looking for assistance with a fundraiser approaches everyone with a restaurant, especially a pizzeria, at some point. "Many times they want money," Sean said. "Rather than give them cash, we talked with the Restaurant Alliance group and decided to create a coupon card instead. The coupon card has 10 offers with about $100 in value discounts on it. The school can sell them for $10 each. If they sell 20 cards or more, they make more than if we just give them cash. It also serves as advertising, and in many cases the card's value is not completely redeemed. Since there aren't many sports events going on right now, we are negotiating with the schools for banners in gyms and on athletic fields in return for making a contribution." 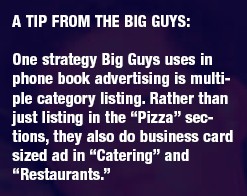 One way Big Guys spent advertising money wisely was with a $300 ad in a local shopping guide. The guide was distributed to every home in the area and had three offers. One was for two medium pizzas for $12.99, one was for two large pizzas for $16.99 and one was a misprint that offered a pizza deal that was only 50 cents cheaper than the menu price. "This was a good decision for two reasons," Dylan said. "First, it was distributed to everyone. We did get sales from it, too. The second reason it was good was because the mistake showed us you don't always have to have a major discount to draw people in. If you just advertise a �special' people will come as long as they feel they are getting something. People like coupons even if it isn't a big discount."

During the dot-com boom, every one thought online ordering was going to be the next big thing, but it never materialized. One might argue that the reason for its failure was the insane charges many online ordering companies charged. Would you make an order online if it was going to cost you an extra $5.95 or extra 10 percent? I think one contributing factor may have been over-pricing by the software companies at that time in learning a new market. Another reason was probably because at that time, few, if any, had constant Internet access. You had to go dial-up and wait for the pages to load. Times are changing. In the past 12 to 18 months, DSL, cable Internet and cheaper extra phone lines have put more people online at all hours. Many are using the Internet to view menus, but high charges are still a deterrent. Through Restaurant Alliance, Big Guys found not only an affordable online ordering solution, but also discovered much higher ticket averages for online orders.

"Monty turned us on to a company called CoolOrder.com," Dylan said. "We didn't, and still don't have our own web site, but they designed a page on their site. The great thing about this is it's hands-off for us. All we do is collect the orders from the fax machine and make pizzas. The only thing we have done is put a fishbowl out to collect business cards and email addresses. We hand them over to Mani at CoolOrder, and he puts them in to our email lists. About once a week, he sends out an email blast and the orders come in. We have a small logo on our menus, but really don't push it too much and the orders are still there. The interesting thing we have seen is that online orders average $8.46 higher than our other ticket averages, which average $14.75. We've received 66 online orders at an average of $23.21 per order. That's very cool. Of those online orders, 60 percent are for the email specials and 78 percent are for delivery."

I assumed their online ordering would come with a heavy set-up fee, but soon discovered there were no set-up fees and only a $20 service charge per month. I spoke with Mani, and he said that with just a $1 per-order fee, customers don't have a reason not to order online. Not only does it produce higher ticket averages, but also fewer mistakes are made.

In addition to creative marketing, Big Guys Pizza & Pasta have learned that tracking what you do is key to finding out what works. In addition to marketing in traditional ways, they use high definition TVs as yet another way to draw customers in. It works because there are several groups who come in on the weekends to watch the big screens, eat and drink with friends. By getting out in the dining area and talking with customers, they have earned catering business along with turning the casual customer into a loyal fan.