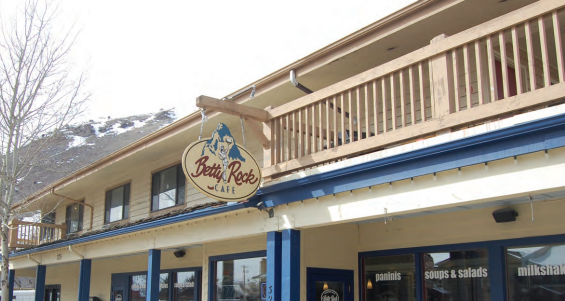 Not long ago, passing by the empty building where his beloved restaurant once bustled, Marc Hirschfield and his wife, Anise Morrow, lamented on the good times they had at Betty Rock Cafe (bettyrock.com). From 1995 to 2002, Hirschfield and Morrow ran one of the most popular lunch eateries in Jackson, Wyoming. In 2003, though, Hirschfield sold Betty Rock to help start a fine-dining restaurant; Betty Rock changed hands a couple of times and eventually shuttered its doors in 2008. In 2009, however, the lure of a lively lunch crowd and the everybody-knows-your-name atmosphere was just too much to resist: Marc and Anise bought the building where the original Betty Rock stood and decided to give it another go.

This time would be a bit different, though. Lunchtime service would be just like Betty Rock version 1.0, but Hirschfield, a native of Westchester County, New York, tapped into his roots when creating the dinner menu and decided to focus on serving pizzas like the ones he grew up eating at places such as Sal’s and Vinnie’s back home in eastern New York.

Since reopening, Betty Rock has come back with gusto. Starting at 4:30 p.m. daily, Hirschfield and his head chef, Kyle Tranby, crank out pies that would make Westchester County proud. He points out two aspects to making a pizza like the ones from his childhood: “It has to have a thin, crispy crust with just a little chewiness, and the sauce has to be simple but flavorful,” Hirschfield says. Although he had a template for the pizza he wanted to create, Hirschfield credits a decades-old dough recipe for the success of Betty Rock’s pizza endeavor. “I have a great, classic dough recipe, and I’m comfortable handling dough—even at high altitudes.” That’s a must for his location, because Jackson sits at more than 6,000 feet above sea level.

Jackson businesses also rely heavily on tourist seasons. The winter brings thrill seekers to the bevy of ski areas nearby, while summertime sees a flood of road trippers stopping in to get a glimpse of Grand Teton Mountain and Yellowstone National Park. Hirschfield understands the importance of luring the tourists into Betty Rock, but he’s quick to point out that the locals are his restaurant’s lifeblood. “There’s an old saying around here: Locals are the bread and butter, and tourists are the gravy,” Hirschfield says with a grin.

Thus, winning over the local market is the key to Betty Rock’s success. “Many times when tourists come to town, they’ll ask a local where the best pizza or burger or beer is. If we have the locals telling tourists that Betty Rock has the best pizza, then our marketing is essentially done for us,” Hirschfield explains. When PMQ stopped in for a slice, Betty Rock was between tourist seasons; though skiing was winding down, springtime warmth had not yet kicked in. Still, Hirschfield has learned to adapt to—and even take advantage of—these time periods. “The off-season gives you time to prepare for the rush,” he notes. “We cut our staffing back, tighten the nuts and bolts, and get ready for the influx of customers we’ll be seeing in summertime.”

However, business at Betty Rock is hardly slow even during the down periods of the year. The weekly Pizza Night every Thursday at Betty Rock is one of Jackson’s hottest dinnertime destinations. For $11, customers get all-you-can-eat pizza, along with reasonable prices on wine and beer. In a town where exorbitant prices can seem like the norm, a deal like this does not go without notice. The clientele is varied, from beer-drinking skiers and snowboarders still decked out in their mountain gear to families celebrating kids’ birthdays over pizza and milkshakes.

Betty Rock’s focus on local patronage extends to special events, too. The restaurant hosts an event called the Political Pizza Party every year, which invites locals in to meet the candidates for local elections and maybe even share a slice with them. Betty Rock has also hosted jazz and bluegrass concerts. “Our goal is to be a community gathering place,” says Hirschfield. “We try to host events that can bring the community together, all while highlighting the excellent food we serve.”

Pizza in the P.M.

Lunchtime at Betty Rock is centered around a bistro-style menu featuring sandwiches, soups and salads. Once 4:30 rolls around, however, the kitchen turns into a bona fide pizzeria. Dough can be seen flying through the air and back into the hands of head chef Tranby. Kitchen assistants buzz about, pulling pies from the 650° Marsal & Sons oven and slicing them up for hungry patrons.

Betty Rock offers 17 different pizza choices, along with the build-your-own-pie option. Standard pizzas such as cheese and pepperoni are offered by the slice ($3 to $3.50) or as whole pies; specialty pizzas come in 9’’ or 18’’ sizes and cost about $12 for a 9’’ and $20 for an 18’’. Betty Rock also offers Udi’s gluten-free pizza crust for customers who are sensitive to the gluten commonly found in pizza dough. Rounding out the menu are some of the sandwiches from the daytime menu available during nighttime, such as the Turkey Cran Pesto sandwich, which has become a local favorite.

Hirschfield suggests the Dan for customers looking for a savory pizza. Topped with caramelized onions, hand cut Italian sausage and basil, and sprinkled with truffle oil, the Dan goes great with a glass of Vitiano Rosso blended Italian wine, according to Hirschfield (the pizzeria has recently added beer and wine to the menu). Tranby often suggests a more pedestrian pizza—the Roma, topped with tomatoes dried in-house and spicy pepperoni. Rather than wine, though, Tranby suggests a beer with a slice: Lagunitas India Pale Ale, a craft beer brewed in California.

Hirschfield attributes his restaurant’s unique name to actress Julia Roberts. “We were watching Pretty Woman, and one of my friends said, ‘Man, she sure is a Betty…a Betty Rock,’ ” Hirschfield explains. “It’s one of those names I’ve always reserved for super-hot chicks, and it just kind of fit.”

The scenery outside Betty Rock is pretty good-looking, as well. Standing in the shadow of the perilously tall Snow King Mountain, customers at Betty Rock can enjoy outdoor seating on one of Jackson’s buzziest streets while taking in the stunning views of the surrounding mountains and buttes.

Hirschfield has no regrets about leaving the fine-dining industry to come back to Betty Rock. “At a place like Betty Rock, you’re in the fabric of day-to-day life,” he explains. “Diners at high-end places are there for a special occasion and are more isolated. Here, it’s more hands-on, both with the food and the people.”

Although Jackson is a long way from eastern New York, the Betty Rock crew has managed to make pizza that will delight even the most skeptical of palates. After all, offering all-you-can-eat pizza and inexpensive drinks will bring in customers, but Hirschfield notes that the pizza has to be good enough if you want repeat customers. “We never skimp on quality,” he asserts. “People appreciate that.”

Andrew Ousley is a freelance writer based in Jackson, Wyoming.