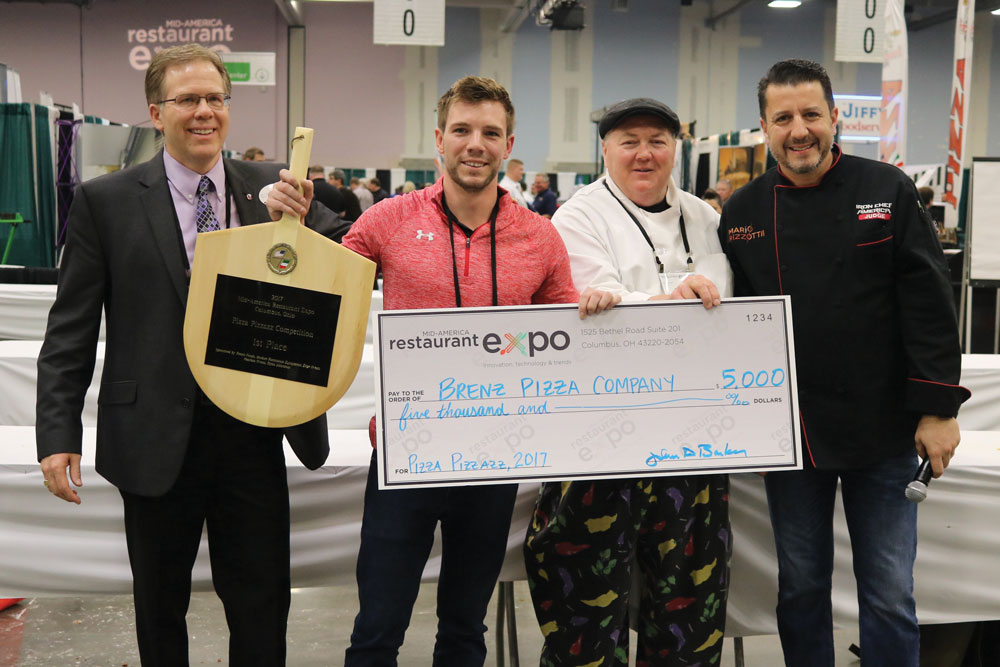 Kyle Rosch, who recently won his second straight Pizza Pizzazz competition at the inaugural Mid-America Restaurant Expo (MARE), says the secret of his culinary success isn’t exactly a secret: It’s all about the dough.

​Rosch has become a familiar face at Pizza Pizzazz, held annually at MARE (formerly the North America Pizza and Ice Cream Show, or NAPICS) in Columbus, Ohio. After winning last year’s traditional category for Brenz Pizza Co. in Chapel Hill, North Carolina, he returned to win top honors again in 2017 with a Bianca Rossa pie. “I’m really surprised and honored to be in the finals, much less to win the top prize, but I really think it’s our dough,” Rosch said in a post-event press release. “We have the best dough recipe out there. I like to let it sit no less than 48 hours, and sometimes 72 hours, in the cooler. We touch it to determine when it’s perfect.”

For his Bianca Rossa, that “perfect” dough gets brushed with olive oil and dolloped with tomato sauce. Rosch tops it with fennel sausage and grated provolone, plus mozzarella and fresh mozzarella. After baking, he garnishes the pie with a chopped tomato salad, julienned fresh basil and shaved Pecorino Romano, then brushes the crust with garlic butter.

Rosch outbaked 44 competitors to earn the $5,000 cash prize and the prestigious Best of the Midwest title. John Hunt of Lexington, Kentucky’s Big City Pizza took second place—and a $1,000 cash prize—with the company’s Tipsy Chicken, which blends beer cheese, grilled chicken and bacon and is finished with a sweet and smoky bourbon glaze. Alex Garcia of Flo’s Pizzeria in Grand Rapids, Michigan, won third place and $500 with the Maui Wowie, which features marinated chicken, ham, bacon, pineapple, mozzarella and tomato sauce and gets a postbake drizzle of pineapple sriracha sauce and a sprinkling of coconut flakes.

Iron Chef America judge Mario Rizzotti emceed the contest. “This was a very tough competition, but you did yourself proud,” he told the event’s finalists. “These were pizzas made at the highest level.”

Rosch may have been a two-time winner, but newcomers stole the spotlight in the U.S. Pizza Team’s Winter Athletic Events, also held at MARE this year. Competition categories included the Fastest Pie Maker, Largest Dough Stretch and Fastest Box Folder, with 15 competitors joining the action.

Next up was the Largest Dough Stretch, in which the pizza athlete must stretch out an 18-ounce dough ball as widely as possible in five minutes. Newcomer Butler again claimed the first-place medal. Second place went to LaRose, while new competitor Matt Hickey of Caliente Pizza & Draft House scooped up third place.

The final event was the Fastest Box Folder, requiring each competitor to fold five 14” boxes as quickly as he can. First place went to Ashley Parthemore of Michael Angelo’s Pizza in Rushsylvania, Ohio. Parthemore has competed in several USPT events in the past. Second and third places were taken by first-time competitors Tiffany Westfall of 600 Downtown and Scott Simpson of Caliente Pizza & Draft House, respectively.

This year’s USPT Winter Athletic Events drew one of its largest contingents of competitors in recent history, noted Brian Hernandez, the team’s coordinator.