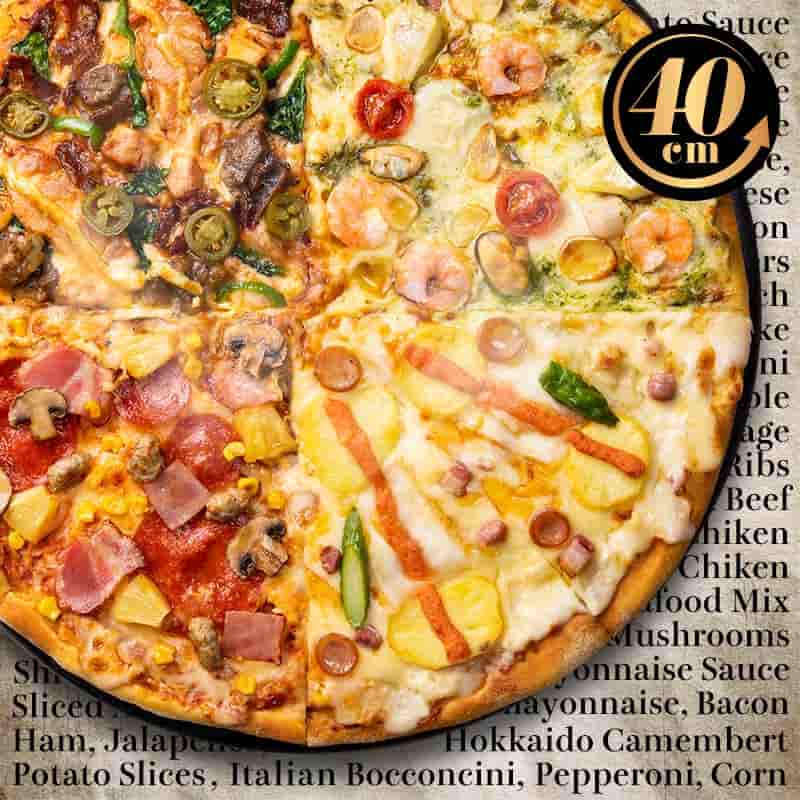 Domino’s isn’t exactly famous for bold culinary experimentation in the U.S. But anything goes overseas—like, say, Japan, where the chain recently offered 34 toppings piled onto a single crust.

The limited-time offer has since expired, but for Japanese pizza lovers, the 34-centimeter extravaganza (just under 16 inches) must have seemed like a test of both the palate and the digestive system. Domino’s Japan called it the Best 34, “a pizza with a whopping 34 toppings, all balanced to perfection.”

Some of the toppings make perfect sense as combos, but this was more like a combo of many, many combos. The pizza had a base of three sauces—tomato, basil and white. Then there were the meats, including pepperoni, big pepperoni, ham, sausage, Italian sausage, beef ribs, pancetta, charcoal-grilled beef, Teriyaki chicken, roasted chicken, shrimp and bacon. Oh, and the “seafood mix”—don’t forget the “seafood mix.”

Domino’s Japan didn’t skimp on the cheese either. The Best 34’s ingredient list names cheddar, Hokkaido gouda, Hokkaido camembert, Italian bocconcini and just “cheese,” which might or might not have been mozzarella.

And is it really a deluxe pizza without mochi (also called rice cakes—i.e., round buns made of steamed, pounded and mashed rice), a slathering of mayo and another slathering of “spicy cod roe mayonnaise sauce”?

The pizza appears to be divided into quadrants, with different topping combinations on each section. For example, customers could chomp into one quadrant topped with corn, pineapple slices and several meats, and another featuring potato slices, asparagus, pepperoni and pancetta. Upon close scrutiny, however, there is no sign of a kitchen sink.

The pizza sold for 2,750 yen or nearly $24. And that was for carryout. The price doubled for delivery. Presumably, a pizza like that has to be handled with extra care.