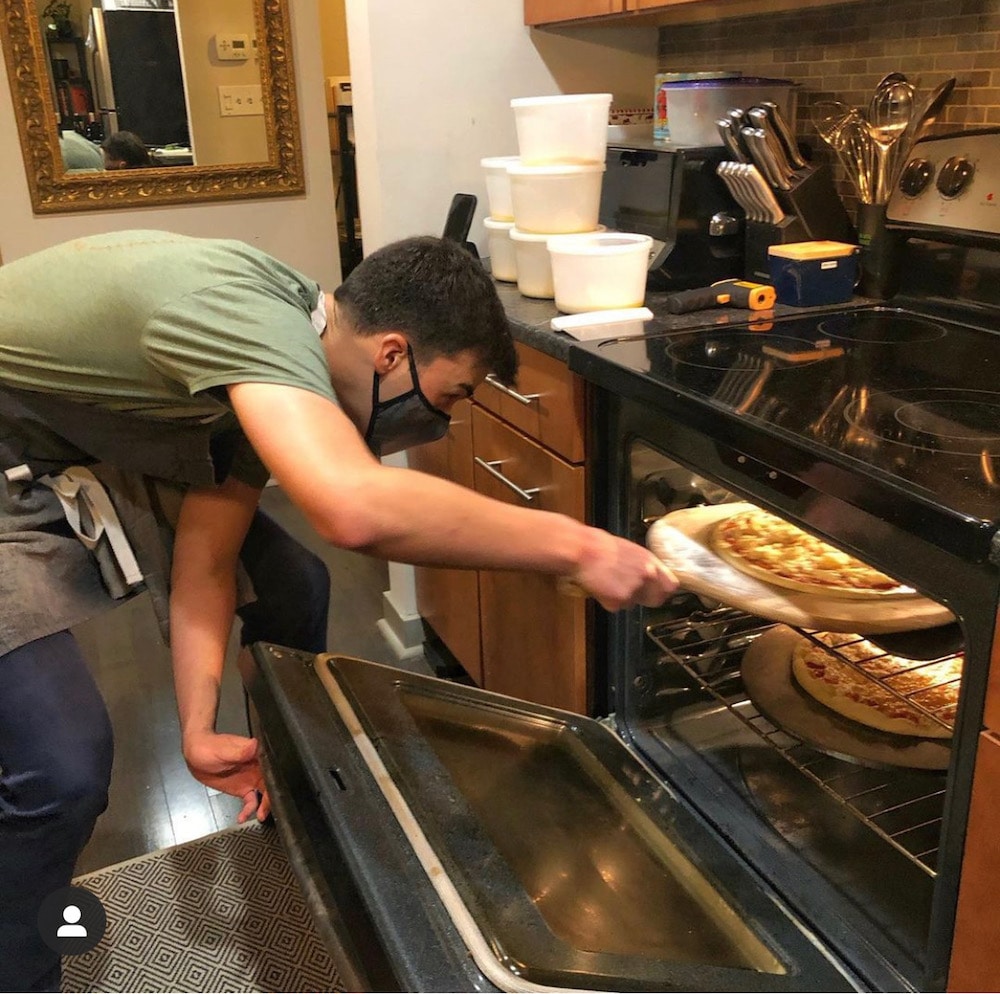 Ben Berman makes pizzas in an electric oven in the kitchen of his Philadelphia apartment.

Philadelphia pizza maker Ben Berman won’t deliver a pie to your doorstep, but if you stand outside the window of his apartment, he’ll lower it down to you via rope and pulley.

But Berman, founder of Good Pizza, didn’t get into the pizza business for profit—it’s all for various local charities, as he explained recently on CBS This Morning. “I realized I could make people smile by dropping slices of pizza out my window, and that was really the original idea,” Berman explained to the show’s co-host, Michelle Miller, in a recent segment.

The 2021 Pizza Power Report: How pizzeria operators can thrive in the coming year

Berman started out experimenting with recipes and making pizzas for his friends at his Center City apartment. When the pandemic hit, those social gatherings ground to a halt—but the pizzas kept coming.

“I actually had made pizzas to have some friends over, and it became clear that we probably shouldn’t gather for a pizza night,” Berman said in an interview with the Wharton School at the University of Pennsylvania, where he is presently working on his MBA. “But I had these 10 pizzas that I needed to give away somehow, or else I’d be eating them myself.”

So Berman told his friends to come over and stand outside his window. He placed the pies on a paper plate wrapped inside a plastic bag, then lowered them down on a long string. “People thought it was really cool … As things got more dire over the summer, I wanted to find a way to give back. It was just an opportunity to marry those two things.”

His delivery system has since evolved into a more sophisticated rope-and-pulley arrangement. Pizza fans can donate online to Good Pizza for a chance to win one of the 20 pizzas Berman makes in his electric oven. Pizza drops take place twice a month, with hundreds of people signing up and donating to support the project.

So far Berman said he has raised more than $30,000 for nonprofits like Philabundance, which combats food insecurity, and Project Home, which addresses homelessness in the Philadelphia area. Berman pays for the ingredients out of his own pocket, and all funds he receives go straight to the charities he supports.

The Good Pizza project got a big boost in late November when Dave Portnoy of Barstool Sports gave Berman’s pies a positive review on his popular website and made a $7,200 donation. “I went from 150 followers on Instagram to over 10,000,” he said. “I’m really thankful for that platform. It helped us raise close to $15,000 in that very first weekend, and it really started to open some doors.”

He also got a recent boost from Tobias Harris and Matisse Thybulle of the Philadelphia 76ers. They offered to match the next $5,000 in donations to Good Pizza.

Berman makes a wide range of pizzas, but he told 6ABC that the key ingredient is love. “It’s just about making everything with love,” he said. “I’m using really good ingredients, and I’m taking my time on every pizza.”

He describes his pies as “sort of thin and crispy with a little bit of chew on the top crust. Not too much cheese, not too much sauce, sort of the right amount of everything. Everything gets a little bit of basil, a little bit of garlic oil on the crust before it goes out, and a little note on top of the box just to let people know that they’ve made a difference.”

Berman is no stranger to the restaurant business. He and a close friend previously ran a burger-focused food truck, Mainly Burgers, in Portland, Maine, his hometown. He told ABC6 that the company grew to three trucks and 60 employees and was featured on the Food Network. His friend continues to operate Mainly Burgers with his family.

He’s also well acquainted with the perils posed by the pandemic. “I lost my grandmother to COVID-19 in April, and it was a really hard month,” Berman told CBS This Morning. “My grandfather also had it and also spent a few weeks in the hospital. I don’t want other people to go through that. It was harder than I think anyone can imagine.”