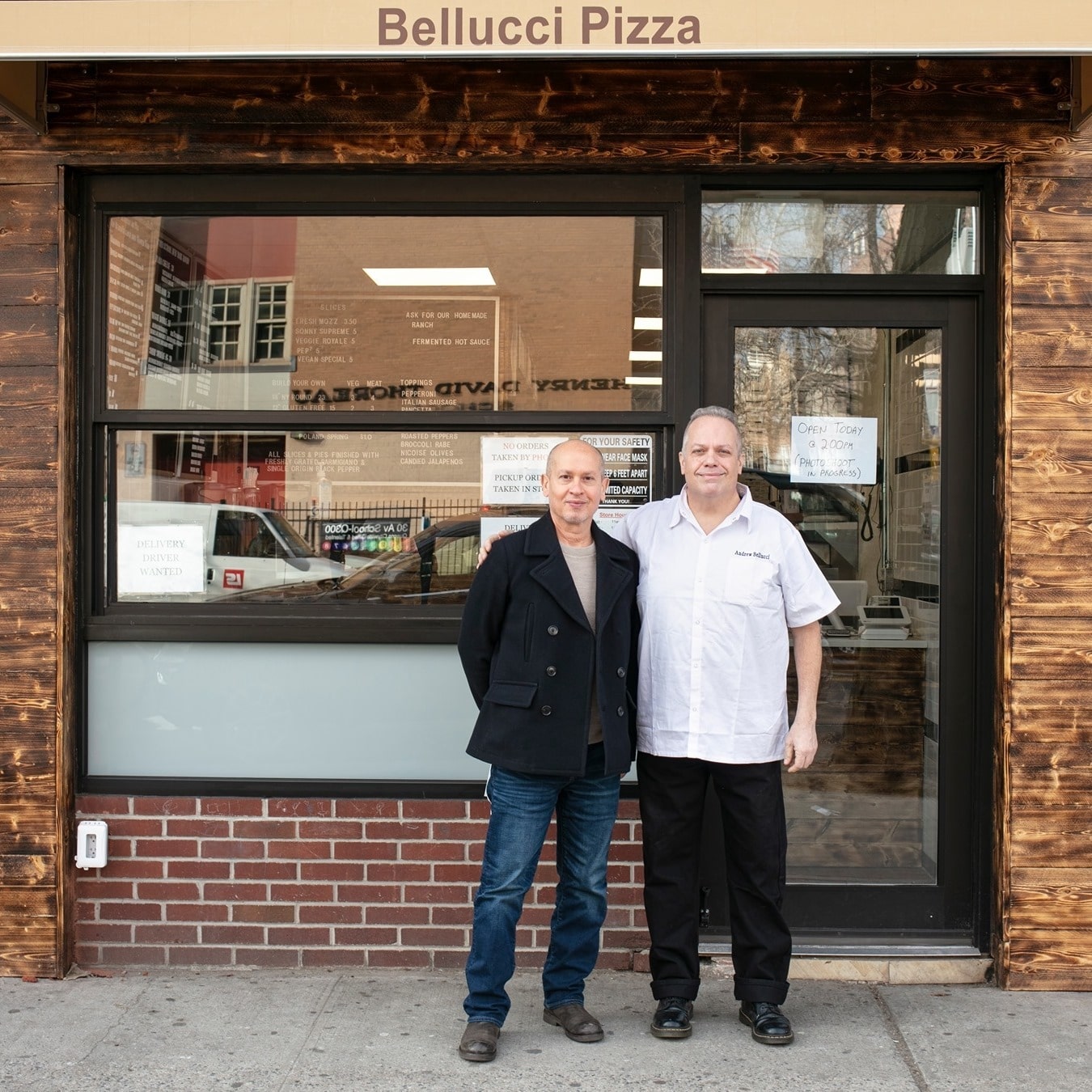 There’s a pie on the menu at Bellucci Pizza that’s named after notorious mob underboss John “Sonny” Franzese, but it’s not just another cliched attempt to align a restaurant with the romance and mythology of the Mafia. Owner Andrew Bellucci knew the mobster well—they were, in fact, cellmates at a prison in upstate New York.

No, Bellucci was never a “made guy,” but he did embezzle a ton of money from a law firm that once employed him and got sent up the river for it. That’s how he met the late mob figure. “They put me in with the Italian guys,” Bellucci told the New York Post.

That was in the mid-90s. Now Bellucci is serving up slices of the Franzese-inspired Sonny Supreme (featuring fresh mozz, two types of pepperoni, hot fennel sausage, balsamic red onions and herbs de Provence mushrooms) at his recently opened shop in Astoria, Queens. Other artisanal pies on the menu include the French Onion (an imported gruyere base, caramelized onions, demi-glace and aged Parmigiano-Reggiano) and the Butter Me Up (a fresh mozz base, pecorino Romano, hot fennel sausage, roasted broccoli rabe with slivered garlic, and, after the bake, sage butter, aged Parmigiano-Reggiano and fresh black pepper).

Bellucci, who once made pies for New York’s legendary Lombardi’s, also dishes out vegan and gluten-free pizzas by the slice in his 300-square-foot shop. 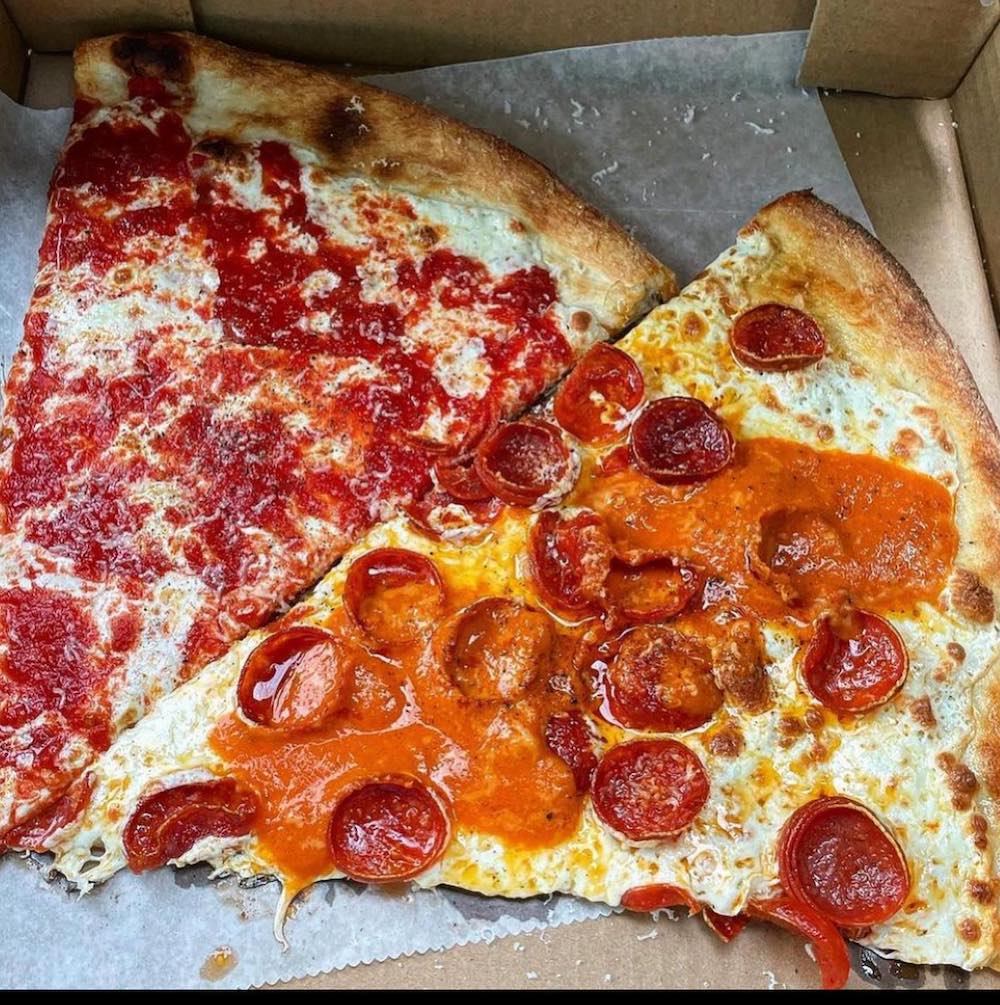 But the road to owning his own shop has been a long one for Bellucci, including one unhappy detour as he served a 13-month sentence for embezzlement.

During his time as office manager of the Newman Schlau Fitch & Lane law firm in the 1980s, Bellucci forged partners’ signatures and fraudulently billed the firm’s clients for extra hours, to the tune of hundreds of thousands of dollars—which he spent freely, he told the Post. He even threw a big party for his fellow employees at the law firm.

Related: Was the Mafia behind the bombings of this Pennsylvania pizzeria?

After leaving the firm, Bellucci slipped away to France, where he took up a new profession, cooking in several Michelin-starred restaurants. Upon returning to New York, he worked at Spring Street Restaurant, where he helped the owners create a late-night menu that included pizza. From there, he moved on to Two Boots and, later, Three of Cups.

When Lombardi’s was getting ready to reopen on Spring Street in 1994, Bellucci hired on to make the pizzas and earned high praise for his work.

But he also earned some unwanted attention from his former law firm employers, who spotted him in all the media coverage for Lombardi’s and tipped off federal agents.

One day in 1995, those agents showed up at Lombardi’s, ordered a pie and slapped handcuffs on Bellucci. “They didn’t pay for [the pizza] either,” Bellucci told the Post. “They owe me 20 bucks plus interest.”

Bellucci went into a self-imposed “pizza exile” after his release from prison, driving cabs in New York for 16 years before he got back into the pizza biz. Working with restaurateur Michael Helfman, he opened three restaurants in Kuala Lumpur, Malaysia, where he also built his own backyard pizza oven and began re-learning his old trade.

Returning to the U.S. again, he helped Joe’s Pizza open a location in Ann Arbor, Michigan, in 2019. There, he found himself rocking the pizza oven on the day of a Michigan-Michigan State football game, when he made more than 500 pies in one day. “I knew, after that game, after not taking a break and being on my feet for 12 hours, that I was back in the game.”

Before long, he found a new partner in Leo Dakmak and opened Bellucci Pizza earlier this year. Dakmak handles the business end, while Bellucci dreams up the pies. In the Post interview, Bellucci said his crust is “heavily influenced” by the baguette. “I wanted the chew and crispness,” he said. He tops every pie with 18-month aged pecorino Romano and freshly grated aranya black pepper from Kerala, India.

Bellucci said his goal is to make his pizzeria the first Michelin-starred pizza-by-the-slice joint. According to Gothamist, he might be on his way. Writing for the site, Scott Lynch described Bellucci Pizza as “first-rate,” praising the Sonny Supreme as “very good” and the Vodka-Roni (fresh mozz, two types of pepperoni and a ladleful of vodka sauce on top) as “delicious.”

In an October 2020 post on pizzamaking.com, Bellucci noted, “For me and my fellow New Yorkers, the slice is the fundamental means of transaction and measure for pizza. Pizza should be approachable and accessible. If someone is short on time and money, just throw three crumpled dollars at me, and you’ll get fed. That’s my philosophy anyway.”

New York City, he added, “has always been the center of my universe. I’ve tried to run away but always felt that I was settling.”