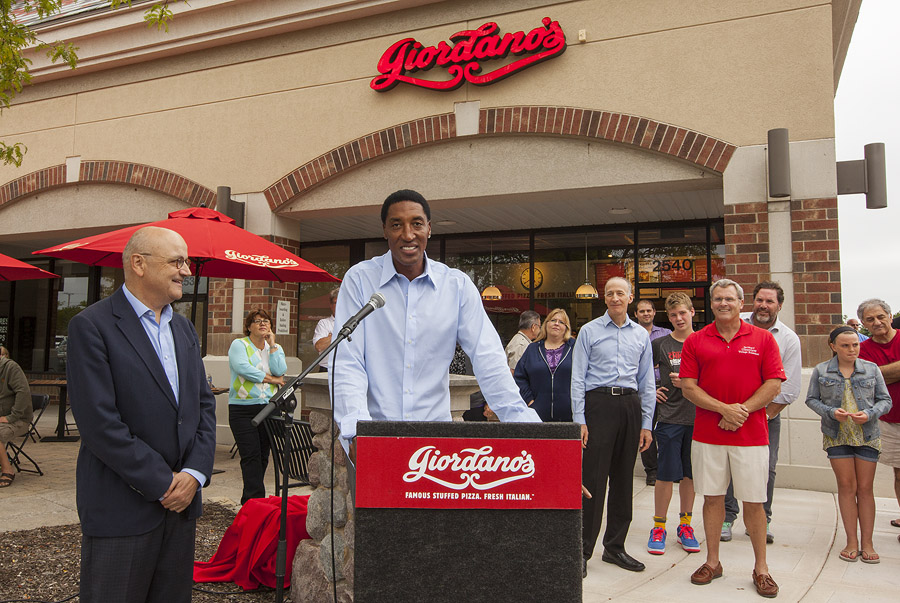 Giordano’s Famous Stuffed Pizza announces the first of several new company-owned North Shore locations it plans to launch in partnership with basketball legend, Scottie Pippen. The first store will open on Wednesday, Aug 20th located at 2540 North Waukegan Road in Glenview, in the Shops of Heatherfield shopping center, bringing the Windy City’s number-one pizza to a corner of the metropolitan area currently without the beloved deep-dish delicacy.

To celebrate the arrival of Giordano’s on the North Shore, an announcement was made at a community gathering at the new Glenview location on Sunday, Aug. 17. The event was headlined by Pippen, who now also has a personal stake in the success of North Shore Giordano’s locations, with the Glenview store marking the first of more to come into the area. The Glenview restaurant will be primarily a carry-out/delivery location led by general manager Barry Waterman.

“I’ve been a life-long fan of Giordano’s and a longtime North Shore resident, so we’ve missed having our favorite pizza close to home,” said Pippen. “I am very proud to be partnering with such an iconic Chicago company and am personally invested in Giordano’s growth as we bring new locations to the North Shore suburbs in the coming year.”

“Giordano’s is ready to make its mark on the North Shore, serving thousands of families, like Scottie’s, who love our unique style of stuffed pizza,” said Yorgo Koutsogiorgas, President and CEO of Giordano’s. “This has been an incredible year for our company as we continue to grow. We will continue our expansion plans to more North Shore communities in the months and years ahead.”

The Glenview opening event began with Pippen shooting hoops with Glenview Village Board President Jim Patterson. Over the course of the afternoon, two lucky fans holding winning raffle tickets received the opportunity to play a modified version of the popular basketball game “Around the World” with Pippen. Guests took shots on a regulation-sized hoop in various locations around the basket, with Pippen taking the follow up shot in each round. Those who tied or beat Pippen in total shots made received Giordano’s pizza for a year, and those bested by Pippen received a gift card and a photo with the star.

The event was attended by over 400 community members and guests. Throughout the celebration, attendees enjoyed the Windy City’s #1 deep-dish pizza and other Giordano’s menu offerings, played Pop-a-Shot basketball and won branded Giordano’s merchandise and prizes. Giordano’s state-of-the-art food truck was also on site serving up pizzas to passersby.

The Giordano’s brand and famous stuffed pizza recipes are owned and managed by Victory Park Capital, a Chicago-based asset-management firm that provides private debt and equity financing to middle-market companies.

Based in Chicago, Giordano’s Famous Stuffed Pizza has been serving its world-famous pizza since 1974, when founders and immigrants brothers Efren and Joseph Boglio introduced their mother’s stuffed pizza recipe to Chicago. Becoming one of the originators of what is now internationally known as Chicago-style stuffed pizza, Giordano’s has 42 locations throughout the Chicagoland area, three restaurants in Florida and is also available for shipping anywhere in the continental United States by visiting www.giordanos.com. Giordano’s was recently named 2014’s “best pizza in Chicago” by Chicago Magazine readers.