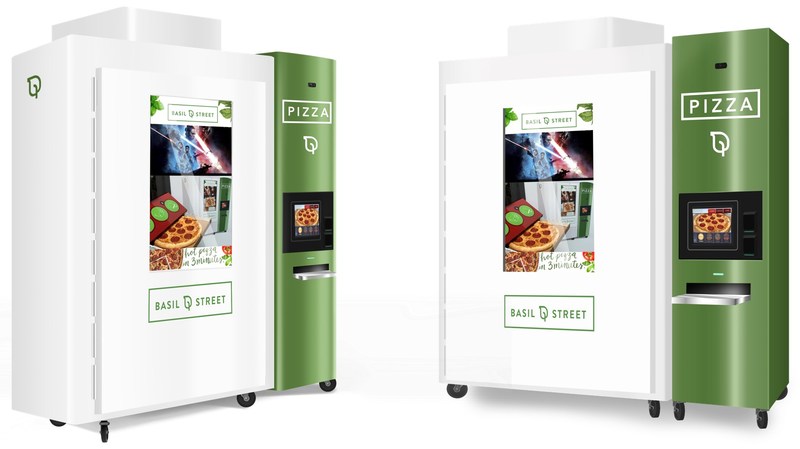 Another pizza vending machine company claims it will revolutionize carryout pizza, thanks to a recent infusion of millions in investment cash.

According to a press release, Basil Street closed a $10 million priced round of funding, with a multi-city pilot program scheduled for April across the U.S. “Using state-of-the-art robotics technology, Basil Street is primed to change the way consumers think about vending machine cuisine forever,” the company states.

Several other companies have made the same promise, including Pizza ATM, which has made it onto American college campuses including Ohio State, Xavier University and the University of Northern Florida. Others include PizzaForno, Pizzametry and the 24/7 Pizza Box.

“In a time of robotic solutions, this one is truly revolutionary,” Basil Street CEO Deglin Kenealy said.

It’s unclear from the press release what makes the technology so “revolutionary” compared to other pizza vending machines already on the market. The 10-inch, thin-crust pies are flash-frozen before being placed in the machine, then cooked in three minutes via Basil Street’s “patent-pending three-element non-microwave speed oven,” the company says. Its website says the oven produces “healthier, safer [pizzas] and provides a superior end product.”

The units are designed for airports, hospitals, convenience stores and college campuses. The company also claims that three kiosks can produce the same net profit as a single brick-and-mortar pizzeria.

Basil Street says its pizza vending machines are “in high demand, as the company has received numerous requests to participate. Those inquiring include large corporate facilities, major medical facilities, universities, military bases and sporting arenas throughout North America. Basil Street is also building a list of global interest for future deployments. In addition, two machines will be delivered to a Basil Street partner, who is one of the world’s largest food and beverage manufacturers.”