Related: Learn more about Basil Street Pizza in this PMQ article from March 2020.

The menu at The Celtic on Market, an Irish sports pub and off-track betting site in Denver, has a distinctly UK flair. We’re talking fish and chips, cottage pie, Highland Scotch eggs and Welsh rarebit sandwiches. But a new item is getting attention from the local media, and you can only order it at the front door.

The Celtic has installed an automated pizza machine from Basil Street Pizza, headquartered in Los Angeles. One of a host of new pizza vending machines that have begun to pop up around the U.S., the Basil Street version—called the Automated Pizza Kitchen (APK)—offers piping-hot pizza in about three minutes.

The APK, placed inside just beyond The Celtic’s entrance, is stocked with flash-frozen, par-baked pizzas in one size (10 inches) and three varieties—pepperoni, four-cheese and supreme—priced between $12 and $15. It can also feature specialty pies, such as a buffalo chicken offering and a breakfast pizza, according to Basil Street Pizza’s website. When a customer places an order, “a three-element non-microwave speed oven” kicks on and finishes the bake.

When the pizza comes out, customers can place it in a quick-fold box, which also comes with a plastic pizza cutter wheel. 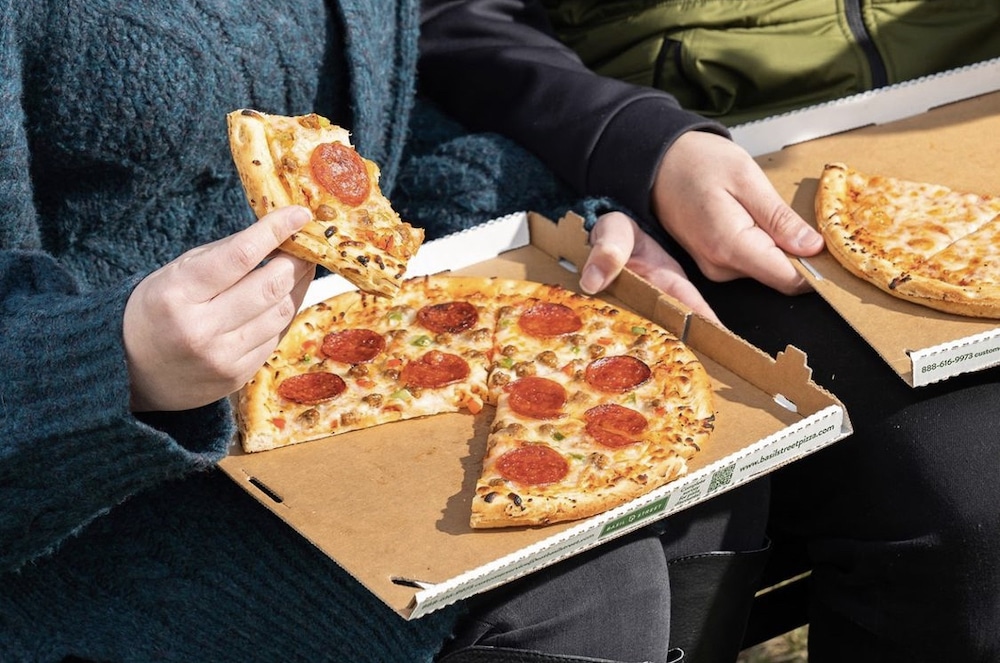 “I saw this as a huge market,” Basil Street Pizza CEO Deglin Kenealy told the Denver Post. “Where can you get a higher quality product, a better price in a much faster time frame, right?”

Related: Will vending machines change the way we sell pizza?

Although many pizza aficionados have doubts about the quality of a pizza one can get from a vending machine, Ashley Carter, the reporter for the Denver Post, was impressed. “I came away wishing an APK was around during my days as an undergrad,” Carter wrote. “A bite of Basil Street’s buffalo chicken pizza was like meeting the pizza I wish had existed then; I’d have chosen it over a frozen DiGiorno or Little Caesars for sure.”

Molly Martin of Westword, another Denver publication, gave the pepperoni pizza a shot—and a lukewarm review. “The crust felt pretty dry and hard but actually was more soft and doughy inside than I’d expected,” she wrote. “The pepperoni was charred around the edges. All in all, it was very similar to every other frozen pizza I’ve eaten in my life: pretty okay. It would certainly have been better if I were eating it late at night, post-cocktails. Maybe then I wouldn’t have thought so much about the fact that I’d just spent $12+ on a relatively small frozen pizza.”