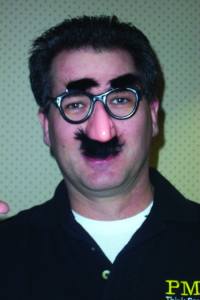 When we announced that Pizza Today had banned PMQ from Pizza Expo in our last issue, it only took a few days before a FedEx package arrived on my desk. The package came from our long time advertisers and good friends Jay and Terry Siff. "We think we found a way to get you into Pizza Expo", the note said. "Here are a couple of items you and Linda can use to sneak in." Inside were these two handy sets of disguise glasses. Thanks Jay and Terry for the idea but we'll pass. However, I do plan on keeping the glasses. Don't they look great?

Most people asking about the controversy think Pizza Today founder Gerry Durnell still owns the magazine. Don't blame Gerry. Although he had some lingering ceremonial responsibilities, he has turned his attention to Automotive Quarterly Magazine (www.autoquarterly.com). Pizza Today and the Expos are now owned by MacFadden Communications, publisher of a string of media properties including Pet Business and Dance Magazine.

For years there has been a strong level of interest in PMQ from Australia, mostly because of the Internet. Last August, Linda and I traveled to the national pizza competition in Sydney Australia and met with former Eagle Boy Pizza owner and PMQ co-publisher Stephan Millar. We decided that the time was right for Australia and New Zealand's first pizza magazine. The first issue debuts in April. If you're interested in reaching the 6,000 pizza stores down under call us for a media kit.

Marc Slutsky and company have put together a great 3-hour program for pizza operators called "Recession Proof Your Pizza Business." The program will be held on February 18th during the Ohio Pizza Show.