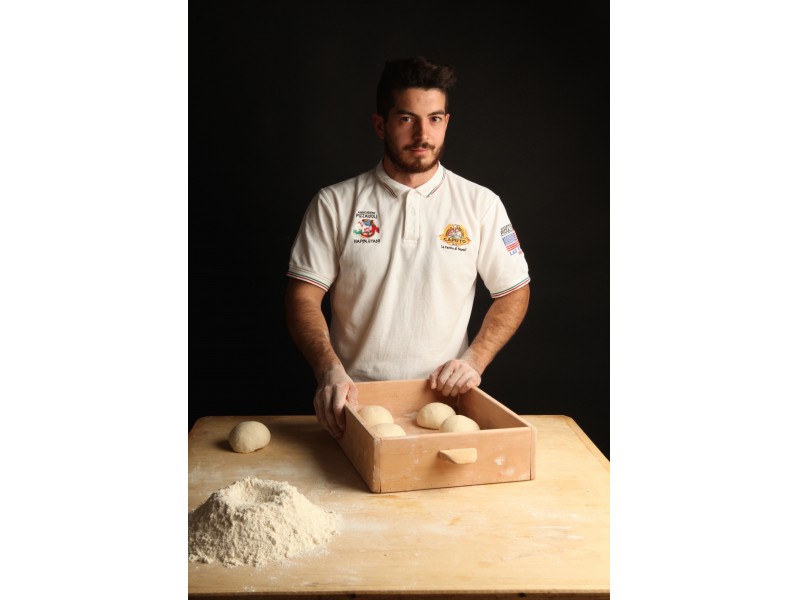 Ridgewood, New Jersey’s premiere authentic Neapolitan trattoria A Mano, proudly welcomes to its staff, multi-award-winning pizza chef Michele D’Amelio. The decorated pizza maker from Italy, has been appointed to head pizzaiolo overseeing the Neapolitan pizza-making team, and is already heating things up by crafting special pizzas for the restaurant.

Born in Avellino, Italy in 1988, it was in Lioni, a small town outside of Naples, where D’Amelio was raised, and his fascination with pizza-making blossomed. At a young age, each week D'Amelio played with dough his mother used to bake bread in the family’s wood-burning oven. He quickly learned to make pizza for the family, and years later at age 19, began working at a local pizzeria. In 2010 his passion for pizza pinnacled in the opening of a family run pizzeria, Chest’é Pizza, in Lioni.

After honing his craft, D'Amelio's competitive spirit kicked in and he entered several prestigious pizza competitions. In 2010 he took the second place title in the Regina Margherita Association’s Margherita STG competition in Naples, Italy. Next, in 2013 he traveled to Las Vegas, Nevada with the Caputo/Orlando Foods’ team of master pizzaioli and was crowned first place champion in the Italian Style category at the International Pizza Expo. In 2014, D’Amelio was awarded second place in the coveted Pizza World Championship in Parma, Italy. Eager to promote internationally the product of his homeland, the prize-winning pizza-maker accepted a two-year consulting position to help open Pizzeria Testa, a Neapolitan pizzeria in the suburbs of Dallas, Texas, and ultimately settled at A Mano. Said D’Amelio, “I am very proud to be able to share pizza Napoletana with people in the United States. There is nothing quite like authentic Neapolitan pizza, and at A Mano, we make pizza with the same methods used in Naples for more than 300 years. Tradition is important and something that should be passed on. It’s culinary history.”

A member of the elite Italian pizza-governing organization APN (Association of Neapolitan Pizza Makers), D’Amelio has been granted authority to ofer APN certification to aspiring Neapolitan pizza makers who train under his guidance. D’Amelio has made his first culinary mark at A Mano by crafting masterful creations which will run as specials on weekends beginning June 26th. A Mano is located at 24 Franklin Avenue (at Chestnut Street), Ridgewood, NJ. Hours of operation are: Monday through Thursday, 11:30 a.m–10 p.m, Friday and Saturday 11:30 a.m.-11 p.m. and Sunday 12:30 p.m.–9 p.m. Tel. 201.493.2000, www.amanopizza.com, www.facebook.com/AManoPizza, @AManoPizza.

A Mano, meaning “by hand,” is focused on presenting the ultimate combination of authentic ingredients, technique, and methods to create an unmatched Neapolitan experience. The restaurant has gone to great lengths to ensure the quality and authenticity of the craft of traditional Neapolitan foods, with results that speak mouthwatering volumes in every bite. A Mano is one of only a few restaurants in the United States certified by both Italian governing associations, the Verace Pizza Napoletana (VPN) and Associazone Pizzaiuoli Napoletani (APN), to offer authentic Neapolitan Pizza. The exacting standards are what stand A Mano apart from the rest, from the expertise of the pizzaiolo (the specially trained pizza chef) to the use of ingredients imported from Naples (from all natural Caputo flour to the San Marzano tomatoes, grown in the foothills of Mt Vesuvio). Add-in fresh mozzarella made by hand daily, along with outrageous homemade gelato and desserts, and the true concept of artisan foods are revealed. Down to the tiles and equipment from floor to ceiling, the restaurant’s entire makeup is imported from Italy. Its twin domed ovens with round chimneys, hand-built on site by Neapolitan Artisans using stones and volcanic soil from Naples, are the centerpiece of the restaurant, stretching to the ceiling of the two-story dining room.    The architecture of the wood-fired ovens allow them to reach temperatures of 1,000 degrees, creating beautifully blistering, bubbling pizza in less than two minutes.