Knowing that we’d be passing through Atlanta on our way to meet up with 30-Day Pizza Diet guru Matt McClellan, who was biking his way up the East Coast last June, we started searching the Internet for the city’s most popular pizzerias, enlisting the help of sites such as CitySearch, Yahoo Local, Yelp and CityGuide. We also took suggestions from the staff at the Atlanta Convention & Visitors Bureau, as well as staff members at our home base in Atlanta, The Artmore Hotel in Midtown—all in an effort to show you what it takes to be a hit with locals.

In this bustling Southern city, we quickly found that pizza has recently found its place in the spotlight as the well-publicized “pizza wars” rage on. While some pizzerias have been holding down the fort in the city for decades, a recent crop of newbies—many slinging pie styles with which locals were previously unfamiliar—have definitely made the playing field more interesting. Meanwhile, the area’s foodie bloggers are quick to visit, judge and spread the gospel—leading to mobs, factions and a whole lotta healthy competition. We visited several favorites to see why each has earned its spot in the hearts of critics and customers alike. 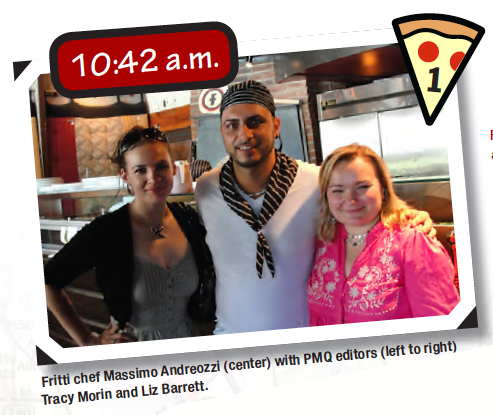 ​Fritti (sottosottorestaurant.com) opened in 2000 as part of the U Restaurants group but attained VPN certification, authenticating its Neapolitan style and heritage, in 2007. Owner Riccardo Ullio, an Italy native, ensures that the certification is followed through with a wood-burning oven; a Naples-born chef, Massimo Andreozzi; and imported Italian ingredients, from flour to tomato sauce. But perhaps the casual environment and readily available alfresco dining (the patio seats more than the main dining room), along with a few extra touches of hospitality, lend themselves more feel of Italy than any specific ingredient. all, Andreozzi passes from table to table as customers finish their meals, offering complementary shots of limoncello that he makes himself—what could be more Mediterranean?

But Andreozzi points to the oven as a major factor in the true Neapolitan feel of the pizzeria; his uncle built the oven and is fashioning a smaller, more authentically Neapolitan oven for the second Fritti location, set to open this fall in the Buckhead neighborhood (the original location is set in the historic Inman Park district). “The oven is really important for the Neapolitan style,” emphasizes Andreozzi. “The oven is small and very hot so that pizzas cook in one minute, and the finished pizza is soft—not soggy, not crispy.” Still, he admits, he tries to accommodate requests from customers to fashion customized pies. “Everybody likes pizza a different way, so it’s hard to please everyone,” he laughs. “Some like soft, or crispy, or well-done. We just make sure the customer is happy when he leaves.”

Andreozzi notes that the Regina Margherita, with San Marzano tomato, bufala mozzarella and basil, is the most popular, catering to a variety of tastes. “The Regina is simple, so you can taste the flavor in the sauce, cheese and basil—it’s a good combination,” he says. After sampling the classic Regina and a deep-dish brunch pizza piled with egg, potatoes and mozzarella, Andreozzi convinced us that he can do simple and complex with equal ease.

When you walk through the doors at Max’s Coal Oven Pizzeria (maxsatl.com) in Atlanta’s bustling downtown district, the first thing that catches your eye are the flames inside Georgia’s only coal-burning pizza oven as it pumps out New York-style pies. General manager Eustace Tompkins says that since the oven was found in the building during the building remodel, it was allowed to stay. “As far as I know, you’re not allowed to install a coal-burning oven inside a pizzeria in Georgia anymore,” he says. Max’s chef, Vee Reed, admits that having a coal oven is a definite bonus, as it helps to impart a crust that’s crispy on the outside and chewy on the inside. “The back of the oven can reach temperatures of 1,500°,” says Reed. “And with a deck that hovers around 600° to 700°, the pizzas cook in four to six minutes.”

While the most popular pizza at Max’s is the Margherita, topped with the pizzeria’s house-made mozzarella, other oft-ordered items include the Sausage Goat Cheese pizza and the Coal Oven Lemon Pepper Wings. (Tompkins admits to having a slice with pepperoni, green pepper and jalepeño every day.) And you won’t find any measuring cups in this kitchen—Tompkins says that they love to pile on the toppings!

Because Max’s is located downtown, creative marketing efforts are often required. “We market ourselves as a group with others in the area and also practice what we call ‘four-walls marketing’—giving out pizza by hand,” says Tompkins. “Once per month, we schedule office parties where we invite 20 to 30 office workers from the area into the restaurant and buy them pizza and drinks.” Customers also enjoy a variety of lunch specials, including one that includes the slice of the day paired with a salad and soda for $7.50, as well as a family pack special that is paired with salad, pizza and dessert. Being downtown near the stadium also has its perks, though: During the fall football season, staff regularly set up a post outside and sell pizzas by the box to hungry SEC and ACC fans. 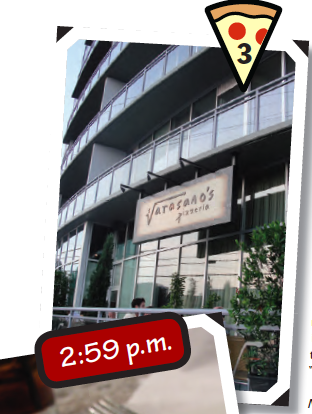 Jeff Varasano, owner and operator of Varasano’s Pizzeria (varasanos.com), could easily be described as the mad scientist of pizza. He was burned out at a software engineering job, living in Atlanta and craving pizzas from his home in New York, when he decided to learn the pizza making trade himself, setting him on a decade-long journey that would eventually have him opening his own pizzeria. He experimented with plain cheese pies for more than six years—testing dough recipes, trying tomato brands, sampling dozens of strains of a single herb, adjusting his oven to reach higher temperatures—and published the journey on an exhaustive and hugely popular website. Varasano undertook the challenge as perhaps only would—after all, at 14, he held the world record for the fastest manipulation of the Rubik’s Cube, and he brought that scientific mind to the pizza industry. However, he was working with a set of intangibles, too. “There’s a difference between making a pizza that’s technically perfect and making one that’s memorable,” he explains. goal was to make a pizza that was memorable.”

Thanks to his Web success, Varasano garnered attention from The York Times before even opening his doors, so he had a mighty before him, particularly considering his lack of restaurant experience. After honing his recipe at house parties, he opened in March 2009 now confident in his methods as a pizza maker. “When I didn’t know anything, I admitted it, but I know a lot more now,” he smiles. And, for a pizzaiolo who made nothing but Margherita pies for six years, he prides himself specialty pies. “I believe that our combinations are among the best,” says. “I strive not only to have balance within a single pie and with mixing of the dough, but in the menu as a whole.”

Accordingly, the pizzas at Varasano’s are unique but somehow familiar, offering a range of tastes: earthy, tangy, sweet. We tried every pie on the menu—and a few, such as his Sicilian and potato-and-rosemary pie, that weren’t. Luckily for pizza enthusiasts, he plans on taking the concept markets in the near future. But, like his pizza recipe, he is taking expansion slowly. “Things you think will take months, in reality, take a couple of years,” he says. “But as the country gets less regional, there is definitely room for higher-end pizza outlets, and who better to do it than me?” 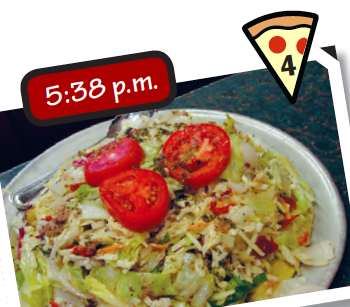 Atlanta’s oldest pizzeria, Everybody’s Pizza (everybodyspizza.com), opened in 1971 across the street from Emory University and, according to co-owner Andy Kurlansky, keeps a safe distance from the Atlanta pizza wars. “We don’t really have any competition,” says Kurlansky. We serve trademarked menu items such as the PBLT (pizza, bacon, lettuce, tomato sandwich) and the Pizza Salad (a pesto-topped pizza crust-baked and cut into squares and then topped with lettuce, tomatoes, sun-dried tomatoes, chicken, cheese and vinaigrette) that customers have been ordering for years.” Kurlansky boasts that even Tom Brokaw was a regular back in the ’70s, giving a shout-out to the pizzeria on the Today Show. And while the menu does change every year or so, with the addition of new creations that Kurlansky thinks up, he says that customer favorites always remain.

Kurlansky and co-owner Phil Paymer opened a second location of Everybody’s in 1991 in the Virginia/Highland area, which offers a wide selection of imported beers and a place to dine alfresco on the back balcony. Kurlansky says that he’s always got his eyes open for the opportunity to open a third location, and with the pizzeria regularly nominated—and often winning—best pizza awards from local votes, another outpost of Everybody’s certainly wouldn’t have a problem filling seats.

While Everybody’s offers a “kids eat free” night, dabbles in local newspaper advertising and donates gift certificates for fundraisers, Kurlansky says he does most of his advertising on the plate with good food. “You have to have passion,” he says. “If you’re not passionate, cut your losses now and head on down the road.” 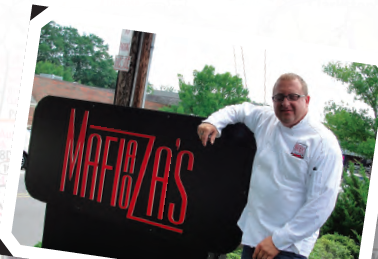 Since we were driving through Birmingham, Alabama, on our way to Atlanta, we thought, “Why not get some pizza on the way?” With a tagline like, “You’re gonna love it…or else!” we couldn’t resist stopping into Mafiaoza’s Pizzeria & Neighborhood Pub (mafiaozas.com), which originally got its start in Nashville in 2003. We were met by general manager Nick Nicholson, who walked us through the menu—then, since road trips work up an appetite, we didn’t waste any time ordering a gaggle of tasty items, including a cheese plate; a trio of dips served with crostini; fried cheese ravioli sticks; goat cheese buttons (goat cheese rolled in breadcrumbs and fried); a slice of The Informant (a veggie pie with basil Alfredo sauce); a slice of The Dolan (spicy barbecue chicken with a barbecue sauce base and Mafiaoza’s blend of cheeses); and a Margherita pie.

Antico Pizza Napoletana (anticopizza.it) has been noted for intensifying the Atlanta pizza wars with its simple rustic interior and limited list of pies that take inspiration from Naples; despite having been open for just over a year (since September 2009), many consider it the best in the city. The process of eating at Antico is unique: Order at the counter in front, and eat in back on oversize picnic tables that overlook the wood-fired ovens churning out pies, stacks of fl our bags, and pizzaiolos tossing wet chunks of mozzarella on just-spread dough balls. Since we had just arrived in Atlanta on a major pizza eating excursion, we ordered lightly—single pie, the Margherita D.O.P., with San Marzano tomatoes, buffalo mozzarella, basil and garlic.