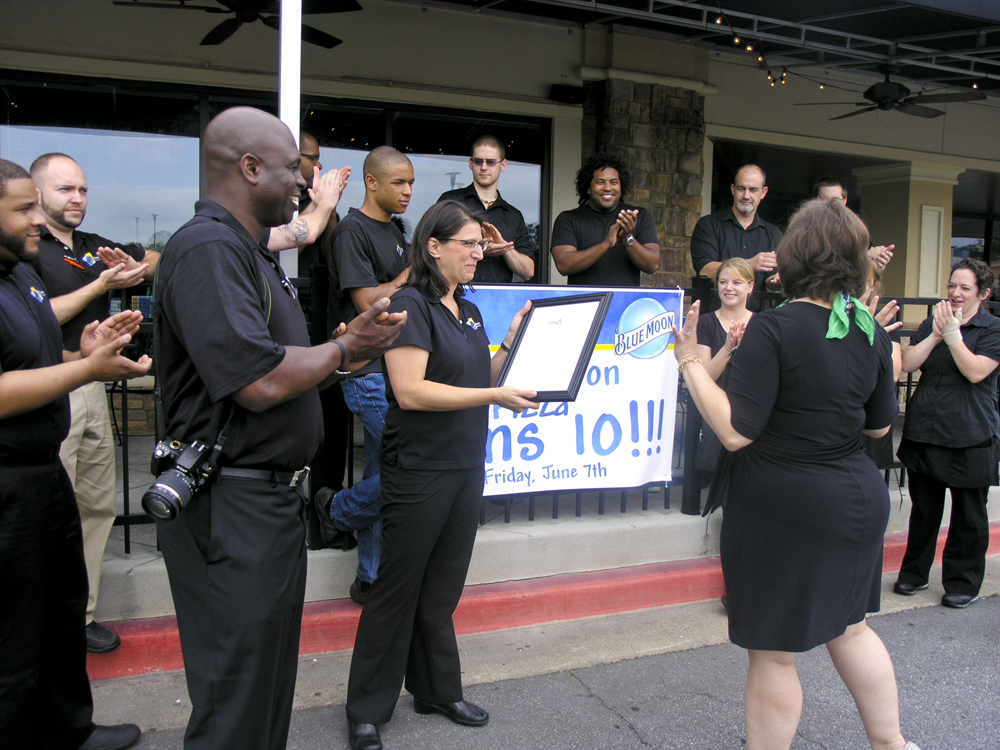 Employees and staff of The Cobb Chamber of Commerce and The Cobb County Office will attend the Birthday celebration in Marietta on the morning of June 7th, 2013.  Mandy and Kelvin Slater will be presented with a Proclamation Award from The Cobb Chamber of Commerce Ambassadors for their contribution to Marietta, and the Cobb County Community.  The Proclamation Dedication will be at Blue Moon Pizza’s Marietta location, 2359 Windy Hill Road, Marietta, GA  30067 at 11:00am.

Blue Moon Pizza Restaurant was a collaboration of love for Husband/Wife team, Kelvin and Mandy Slater.  This Floridian couple, with a background in the Corporate Restaurant Industry, decided that they wanted to have their own Restaurant, an eatery with an extra-special, feel good atmosphere.  Kelvin and Mandy’s approach was that the Blue Moon Pizza Restaurant “Mission Statement” should be simple ~ “To give people an everyday place that still feels special”.  Within that “Mission Statement”, it would be a given to serve great Pizza.  Sure, that was a “no-brainer”.  But more than just great Pizza ~ the overall experience was to be top-notch.  The environment had to be an everyday escape where you could relax, be taken care of, and enjoy the human race.  The Slater’s first Blue Moon Pizza Restaurant opened in the suburban Marietta/Windy Hill section of Atlanta’s Cobb County on June 7th, 2003 with just five employees.  Eventually, successor locations of Blue Moon Pizza Restaurant opened in accordance as follows: the Vinings store opened in June, 2007; Buckhead opened in August, 2011; while Sandy Springs followed shortly thereafter in December, 2011.

Blue Moon’s menu is yummy and diverse, with a large variety of delicious Pizza being the center of attention.  With a full bar and good food, there is always a “favorite” on the menu at this Restaurant at any given time!  Their signature “Specialty Moons” are Pizza Pies in mouth-watering flavors such as Santa Fe Chicken, Jerk Chicken, Thai Chicken, The “Meateor”, Veggie Pizza and Grandma’s Pizza, just to name a few, and are highly requested customer faves!   The Slater’s strong, continuous efforts and creativity have established Blue Moon Pizza Restaurant as a staple in the Atlanta community, while always reminding customers of their tag-line, “Life Should Be Less Ordinary”.