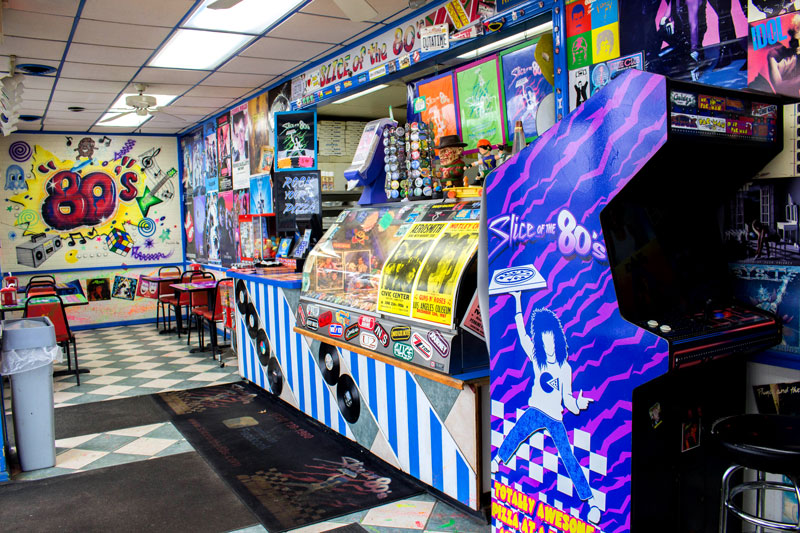 Like a lot of pizzeria visionaries, Adam Matt hit the road on his entrepreneurial journey while he was still a teenager. “I was 19 when I started delivering pizzas for restaurants like Hungry Howie’s and Jet’s,” recalls the owner of the popular nostalgia-themed Slice of the 80s in Westland, Michigan. “I fell in love with the pizza business. I moved on to some independent pizzerias in the area and learned from both sides of the industry. I loved the fast pace of the chains but appreciated the painstaking attention to detail at the independent stores, where we made our own cheese and cut our own fresh vegetables.”

By 2008, Matt, a 24-year-old pizza industry veteran, knew he had the seasoning and chops to run his own pizzeria. The business model he chose reflected his own sense of independence, originality and strict quality standards. He also threw some tricked-out hot rods into the deal. Slice of the 80s is known today for its award-winning pizza, vintage video games and brilliantly colored, logo-wrapped delivery chariots. Not to mention the rad decor—between the store’s rockin’ metal-band logo and the outlandish wall mural depicting Pac-Man characters, a Rubik’s cube and an old-school boom box, Matt has captured the essence of the ’80s and serves it up slice by slice every day. Like, totally, dude.

Back in 2008, the venue of Matt’s dreams was a closed-down pizzeria called Papa Romano’s. Matt found it on Craigslist, where he’d typed out his hope for the future in two words: “pizza, turnkey.” The listing was only 20 minutes from his house. When Matt inspected the property for himself, he didn’t see a dark, vacant, white-walled 1,500-square-foot space with limited seating. He beheld a vision of a glittering pizza palace pulsing with the musical energy of Def Leppard and the wakka-wakka tones of a Pac-Man machine.

“I had been saving my money like crazy for six months when I found the property—just a perfect location and a fair price,” he recalls. “I stepped into the lobby, and it precisely matched my vision for an ’80s-themed restaurant. I immediately called the realtor. He met me at 9:00 in the morning, and I said, ‘I’ll take it!’ I had to run to the bank and scramble back with my deposit. I had never been more excited in my life.”

Matt, who was born in 1983, grew up rocking out to MTV and guiding a hammer-wielding Mario through the dangerous world of Donkey Kong. Accordingly, he has spent the past seven years perfecting Slice of the 80s in tribute to his favorite decade. Voted Best Independent Pizzeria by viewers of Detroit’s WDIV-TV in 2014 and 2015, the little pizzeria attracts a crowd of families, hip singles and millennials with its siren combo call of flavored crusts and 1980s atmospherics. It’s a place where Generation Xers can still play Galaga and Millipede and specialty pies have names like Tubular, Gnarly and Radical. Everywhere they look, guests are transported back to the Reagan years, thanks to Van Halen and Bon Jovi posters and album covers, bright splash-paint accents and neon-adorned graffiti murals on brick facades affixed with vintage electric guitars. They can focus on familiar friends of yesteryear, from the California Raisins to He-Man and Freddy Krueger action figures, and tap their toes to the digital pulses and tracking lights of the arcade machine that features more than 50 classic video games.

The playful, pure-fun concept makes Slice of the 80s different than your grandfather’s pizzeria—or your mom and pop’s store, for that matter. The customers themselves have even helped to create the ambience. “When we opened, we got the community involved in our ’80s theme by inviting them to bring in their Back to the Future items from their basements to help decorate in exchange for a free large pizza,” Matt says.

Get Outta My Dreams (Get Into My Car)

But Matt’s most effective marketing tools can be found out on the open road—his delivery fleet of show cars that are as flashy and in-your-face as the metal bands that inspired them. Fresh pizza and fast cars go together like Mario Andretti and milk, so Slice’s “formula one” for marketing starts with mobile branding. “Our business is 60% to 65% delivery, 25% percent pickup and 5% percent dine-in,” Matt explains. “While delivery sales were going up in our first few years, I noticed this beautifully wrapped car cruising down the street one day, promoting the local Ford dealership. The idea hit me like a thunderbolt: Why spend $400 or $500 on ads in a publication when I can have a billboard on wheels pay for itself? We found a great company, and our drivers agreed to have their cars wrapped with a vinyl-latex covering designed with our logo—a gnarly, radical rocker dude rendered in bright, brilliant colors.”

Every pizza delivery for Slice of the 80s gets attention as these customized vehicles roll into neighborhoods or idle at traffic stops. “Our cars really turn heads, and we constantly get calls from new customers who noticed our logo out on the street,” Matt says. “The wrap looks incredible and protects the vehicles from rain, snow and stones. Now we operate two bright blue vehicles, including a Prius, and a hot pink model.” (In truth, Matt concedes, his delivery buggies aren’t really that fast—but they sure stand out.)

But even cool cars and Donkey Kong can’t make people want to eat your pizza if it doesn’t taste good. Fortunately, Slice of the 80s has that covered, too. Matt and his staff make their own dough and sauce and chop and prep fresh vegetables every day. They’ve developed seven flavored crusts, including Original, Butter, Butter Parmesan, Butter Garlic, Cajun, Sesame Seed, Honey and the most popular flavor, Nacho Cheese. “In the beginning, we did everything fresh, because I preferred the independent approach and, frankly, we had the time because we weren’t that busy,” Matt recalls. “Now that we’re always busy, we’ve stuck to that plan, because our customers tell us they love our food and they’d be depressed if we didn’t make it fresh.”

Delicious food, a winning theme and those flashy cars have helped drive annual sales from a starting line of $300,000 in 2008 to more than seven figures. “Last year, we broke a million for the first time,” Matt says. “From where we started, that’s incredible.” His website’s large yellow-text “Order Online Now” button has boosted sales and improved the bottom line, too. “I got tired of paying someone just to answer phones, so I put in my website two years ago and integrated an entire online and social media ordering system with point-of-service technology,” Matt notes. “With online ordering, the customer acts as his own employee, with a digital POS system at his fingertips. They see the menus in detail on the screen and take on the responsibility themselves to get the order right, which is what younger customers want today.”

With sales rising every year, Matt admits to contemplating future expansion, but his current focus is fine-tuning his single-store baby. “We’re so into quality here that I fear opening up another store would spread us too thin,” he says. “If someone came in with an offer to franchise our concept, we’d consider it, of course.”

But, at 32, he’s in no hurry. He has already proven that creative vision, solid marketing and quality food can overcome the competitive challenges of a chain-linked pizza playing field. “My passions in life are pizza, my family and the ’80s—not necessarily in that order,” he says. “I figured I’d incorporate what I love into my job, and it would never seem like work.”