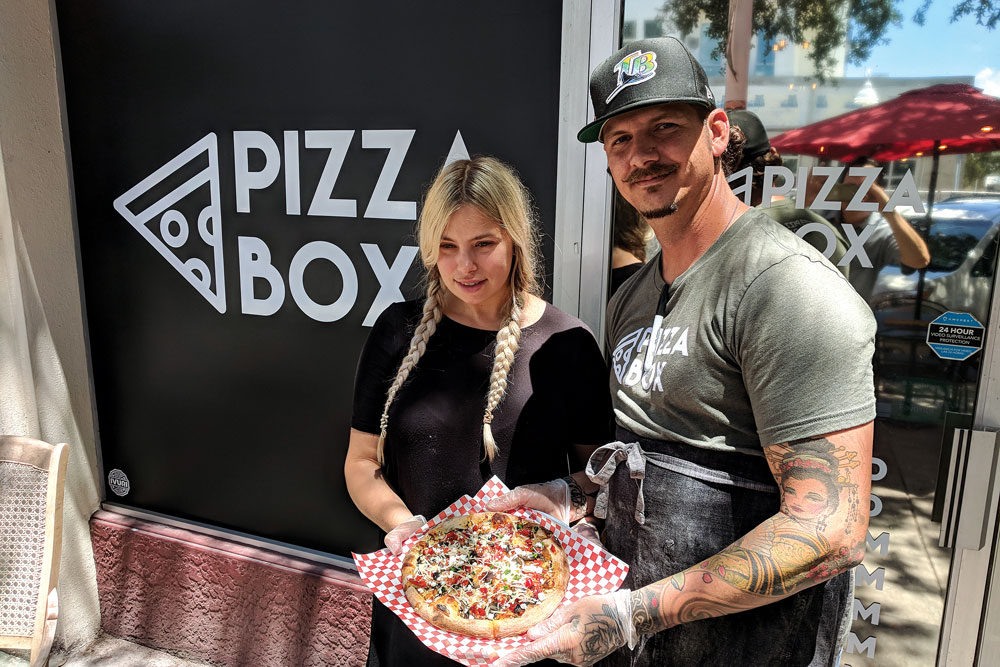 On a busy strip in St. Petersburg, Florida, lies an unassuming little shop serving delicious and original pizza creations—the emphasis being on “little”. Operated by Kelley McKell and her husband, Adam Duff, with some help from Adam’s brother Andrew, the pizzeria known as Pizza Box is a mere 750 square feet. Walk into the tight confines of the shop on any given afternoon, and you’ll find McKell and Duff alternating between expertly working the oven, filling drink orders and slinging pies to hungry customers. But here, good things come in small packages.

“We had people dine in and tell us, ‘You guys will probably have a nice little run, but you’ll be out of business in a year.’ But here we are, two years later, successful, making money, making it work!”
— Adam Duff, Pizza Box

You’d never know that the restaurant made a fairly inauspicious debut, back in April 2016. “We put everything we had into this place,” Duff recalls. “When we first opened, things were slow—so slow that we resorted to literally standing outside on the sidewalk holding free pizza, begging people to stop and try some. We really didn’t know if we were going to make it.”

Complicating matters in those early days, a competing pizzeria had opened a mere three doors down from Pizza Box. Everyone loves a David and Goliath story—until they find themselves in the midst of one, facing down a giant. “The morning I was going to sign the lease for this space, my mom frantically called me and said, ‘Have you read the paper? They’re opening a wood-fired pizzeria right next door to you guys!’” Duff recalls. “I checked into it and found out this other restaurant had spent $300,000 on the oven alone. That was almost three times more than what we were putting into our entire restaurant!”

“Honestly, we didn’t know how this would impact our business,” McKell adds. “We decided to go to the pizzeria’s original location to see what their pizza tasted like. After trying their product, we realized how different our styles are. They have a very traditional Italian product, while ours is very nontraditional, made with artisan bread flour. Our pizza is cooked at a much lower temperature and is a completely different consistency.” The couple fought through their fears and pulled the trigger on the lease.

After opening, the early response from locals was not exactly encouraging. “We had people dine in and tell us, ‘You guys will probably have a nice little run, but you’ll be out of business in a year,’” Duff says. “Why would you even say something like that, and to my face! But here we are, two years later, successful, making money, making it work!”

The turning point came a few months after opening, when a local paper visited for a profile on Pizza Box and declared its dessert pizza the best dessert in St. Pete. “People started streaming in to order it,” Duff says. “From there, it was a matter of convincing them to try our pizzas.”

“We use a wood-fired oven and cook at a high temperature, but we have so many nontraditional elements in our style. We smoke with cherry wood but cook with oak. We use an artisan bread flour, and our dough is high-hydration. Our product is thin, crispy, and not chewy in the center. We also use so many different ingredients and try to think outside the box when it comes to toppings.”
— Kelley McKell, Pizza Box 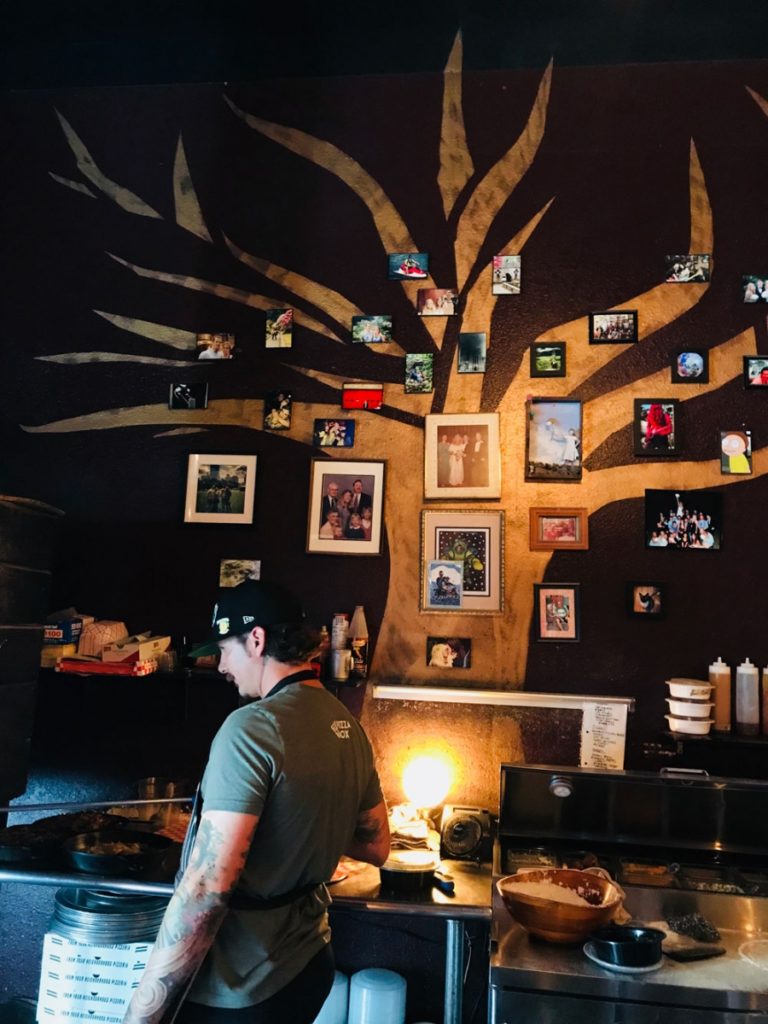 While Pizza Box is the couple’s first attempt at owning a standalone pizzeria, it isn’t their first foray in the industry. Duff and McKell, natives of St. Petersburg and Tampa, respectively, first met while waiting tables at a local restaurant. After years of working in local food establishments, they moved to New Hampshire and launched a tiny pizzeria called the Lemming Pub within the Fitzwilliam Inn, a bed and breakfast, that belonged to one their friends.

Eventually, facing pangs of homesickness, they exchanged the cold New England winters for the familiar subtropical sun of Florida. They returned home with plans to bring their newly honed DIY pizza esthetic to St. Petersburg. “We built this oven ourselves,” Duff points out. “It comes in a kit from a company in Maine. You have to pour concrete in sections and get it just right. I put the frame on wheels, and the whole oven is just the right width to fit through the front door, so it gives us the option to take it mobile, in case we want to do special events.”

Where did the couple learn their wood-fired pizza skills? Duff laughs that he attended “YouTube University” and tapped a mentor for advice. “You can learn how to do anything these days by watching instructional videos on YouTube,” he says. “I also befriended a Sicilian coworker, who shared his love of wood-fired cooking. He showed me some basics, gave me pointers and encouraged me to do a lot of research.”

The pies at Pizza Box may have their roots in traditional Neapoltan style, but that’s where the similarity ends. “We would describe it as Neo-Neapolitan,” McKell explains. “We use a wood-fired oven and cook at a high temperature, but we have so many nontraditional elements in our style. We smoke with cherry wood but cook with oak. We use an artisan bread flour, and our dough is high-hydration. Our product is thin, crispy, and not chewy in the center. We also use so many different ingredients and try to think outside the box when it comes to toppings.”

The ever-changing, seasonally inspired menu includes the Angry Goat, which features spicy herb-infused goat cheese, cherry peppers, fire-roasted red peppers, bacon and chives. The Lover Boy is topped with housemade meatballs, herb-whipped ricotta, caramelized onions, cherry peppers and fresh basil. The Debbie’s Veggie is a seasonal affair, with toppings that change each month, depending upon what’s in season. And the award-winning dessert pizza that helped cement Pizza Box’s success remains a signature dish; it’s topped with honey-whipped mascarpone and whichever fruit is in peak season, then dusted with powdered sugar.

The pizzeria’s interior displays a quirky, rough-hewn character, reflective of the Duff clan’s DIY mentality. Photos of Kelly, Adam, Andrew, and various extended family and friends are displayed on the walls. “We wanted to really have a family environment and make it feel like you’re just over at someone’s house,” Adam notes.

“St. Petersburg is a unique city,” McKell adds. “It is very communal and does not allow corporate chains in the downtown area. Everything is centrally located, and everyone is big on supporting local businesses. This is the perfect area for small mom-and-pops to thrive.”

The tiny size of the pizzeria isn’t just the perfect setting for cozy meals; it tentatively serves as a blueprint for possible future expansion. “The main operating space of this restaurant is almost identical to the dimensions of a shipping container,” Duff points out. “Now that I know we can make an operation work in these dimensions, it’s possible to recreate the model in a modular form by building a restaurant into shipping containers.”

“We are big believers in starting small, but now we want to take the next step and have a second location so that we can reach more people,” McKell adds. “For us, making pizza is about the entire experience—from watching a toddler try pizza for the first time to being a part of great-aunt Ruth’s 90th birthday celebration. This is why we do what we do. Our next goal will be figuring out how to be a part of so many more life experiences.”

With an eye to the future and a strong work ethic firmly dedicated to the present, the folks behind Pizza Box keep finding that success tastes as delicious as a well-made pie. After two and a half years of building a customer base and standing up to stiff competition, it’s safe to say that despite initial challenges, the little pizzeria that could has its sights set on bigger and better.