Taking over an existing pizzeria has built in advantages – and disadvantages – and making an existing place your own can be quite a challenge. If the existing operation was a success, then the new owner may want to only consider minimal changes. If the store was struggling, the new owner may second-guess the decision to go into a troubled location. William Kaminski found himself faced with the latter situation when he and his mother, Raisa Goldenchtein, took over a small pizza parlor in Granville Island, Vancouver British Columbia. The town’s waterfront and outdoor recreational opportunities make it a bustling tourist destination bringing in 12 million visitors a year. There are ample places for food and drink – over 300 businesses in town – which may explain why the previous owner of the pizzeria had downsized to 99 cent pizzas. Even at that giveaway price, the pies may have been overpriced. (The local newspaper once called the place “revolting.”)

Kaminski and his mother gave it a shot anyway. “My mom moved to Vancouver Island and we looked for a business to buy for the whole family to work,” William recalls. “We found a pizzeria for sale at the foot of Granville Island in downtown Vancouver. We figured that would make a great family business. I was a chef by trade but had never made pizzas in my life, and it was a little scary, but we bought the place.”

Diving in courageously and putting in long hours worked for a while but then Kaminski’s creative urges took over. Along with being a chef, he has also worked as a design consultant for several restaurants in Vancouver. He put his consultant expertise to work on his new business.

“We ran it as it was for about six months then I shut it down and gutted it, and totally renovated it and changed the whole concept and design. My plan was to create my own style of pizza and I came up with gourmet thin crust Italian pizza.”

“No matter what a place looks like, I know the food has to come first,” William says. “This is a big city with lots of places to eat. Just serving tasty pies wasn’t going to cut it. This pizza has to be exceptional.”

To create “exceptional” pizza, William says, “we needed memorable dough.” To this end, William decided to bring his grandmother from Toronto. Her dough is a thin crust that is a recipe from her Russian childhood, which she calls, the “Old Country.”

The sauce is made from fresh tomatoes, olive oil, fresh herbs and spices, and has a hint of sweetness. Kaminski lined up a local meat distributor to provide the choicest meats created specifically for pizza such as chorizo sausage, ham, pepperoni and capicolla. For cheese, he decided on a blend of Mozzarella and Edam cheese that he says is particularly flavorful. Daily, fresh produce is purchased at Granville Island Market to ensure the highest quality of pizzas.

“Our goal is to use the freshest products to make the best pizza available in Vancouver,” he says. “THE THINNER, THE BETTER” is the Amadeus Pizza slogan, referring to the thin crust pizza. 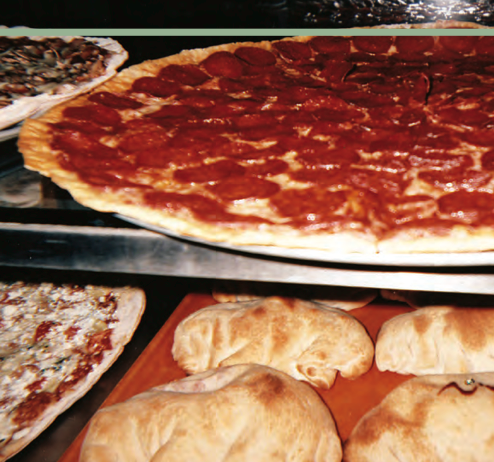 “I think one of our secrets is the thin crust.” William says.

“The thin crust allows the pizza to be rich with toppings, sauce and cheese.” Among the gourmet toppings offered are a garlic-infused basil olive oil, asparagus, Portobello mushrooms, grilled leeks and eggplant.

“Our key non-pizza items are salad. Greek Caesar salad is our biggest selling salad. Everything else is just add on. But we have sandwiches, like turkey and tuna on grilled Focaccia. We offer calzones with three regular toppings. We make a four-cheese meat lasagna. We have oven-baked BBQ chicken wings and potato skins. We had regular customers that asked for those things, but it’s nothing I bank on. Pizza is where I hang my hat.”

The signature pie, William says, is a 16-inch pepperoni pizza that is available for pick-up only. Called the “Pepperoni’s Lovers Special,” the pie boasts 100 slices of pepperoni for a price of $13.99.

“A 16-inch pepperoni with 100 slices of pepperoni is a lot of pizza. In fact, it takes about ten minutes to make it. It gives us something special to be known for.”

Once he was happy with his menu, he and his mother had to figure out how to market Amadeus Pizza.

“We’ve never advertised,” William says. “We ran an ad in the local entertainment book but we cut it out because it wasn’t working for us. We don’t even offer coupons; nada. We’ve relied on word of mouth for seven years.” William says that because of his store’s size, too much advertising could backfire.

“We have seating for about 15 customers so it’d be easy to over load the kitchen. It’s tough, you know, with fliers you can flood people. But we’re not in that style of pizza place. Everything takes longer and that will end up just making customers angry. Our pizzas are made by hand. We just build our business by trying to get one new customer a day and impress them so much, they tell a friend.”

Delivery is an important aspect of Amadeus’ business. Luckily, the location of Amadeus is in the middle of a business area, so call-in orders are plentiful.

“Most of our business for delivery is middle to upper income consumers. We have larger companies like accounting firms. We’re also located near a theater district so we have a lot of actors and musicians. We have a minimum order amount of $15 with no delivery fee. We have anywhere from two to three drivers that we pay by the hour. The price of gas skyrocketed ten cents a liter just yesterday which may affect our prices but hasn’t yet. We probably do 75 percent of our business in take out and by the slice.”

Williams says another area that he’s got his sights set on is making extensive use of Amadeus’ web site (amadeuspizza.com). Right now the site is used primarily to display his menu and give a brief history of the operation. However, he foresees a much larger role for the site.

“Everybody in Vancouver is online, and more and more businesses are realizing the importance of an online presence,” William says. “Right now I‘m concentrating on making it possible to order off our website. We’ll start off using it for next day delivery on large orders only. Once we get the kinks out, I’d like to make online ordering available for same day orders. I just think it’s a natural evolution.

“Right now, we do ten to twelve different flavors of pizza by the slice,” William continues. “The slices are already done in the store and then we just heat them up in the oven. The website has been key for us on this.”

William says right now he’s offering an online special that he says his customers have been warming up to.

“We offer 15 percent off when you buy four large pizzas. The pies have to be ordered by 6 pm the day before delivery. Normally the large pizzas run anywhere from $20-26, so we’ve gotten good response to this. In the near future, we’ll be offering other online specials.”

BEST OF THE WEST

Amadeus Pizza won a popular poll of “Best Pizza” sponsored by a Vancouver newspaper two years in a row in 1999 and 2000. William says the resulting free advertising and publicity enabled him to keep his marketing costs down. But even that success wasn’t enough activity for him. Not one to rest on his laurels, once he felt like Amadeus was on solid footing, he opened another business right around the corner.

“I have a deli called Phat Deli which I run, then I get off at night and go over to Amadeus and help my mom run it. I’m close enough that I can do both. So we’ll keep these two going for a while.”

William says a key for any operator, opening a new business or taking over an existing one, is constant vigilance.

“We’re very careful to stay focused and keep an eye on what’s selling and what’s not and how to position items on our menu. This is a rather healthy-eating clientele we have here in Vancouver, so all the gourmet toppings and salads make sense for us.”

Keeping what works and tweaking what doesn’t, expanding online ordering and delivery, and maintaining quality control – at both his restaurants – will keep William Kaminski busy in Vancouver. However, he says the most important thing is to not let all these other aspects of his operation take the place of his number one duty.

“We’re going to keep working on our food,” he says. “Our pizza is phenomenal and it’s worked out well for us. But you can always improve.”