All you feed is love - PMQ Pizza Magazine
Marketing 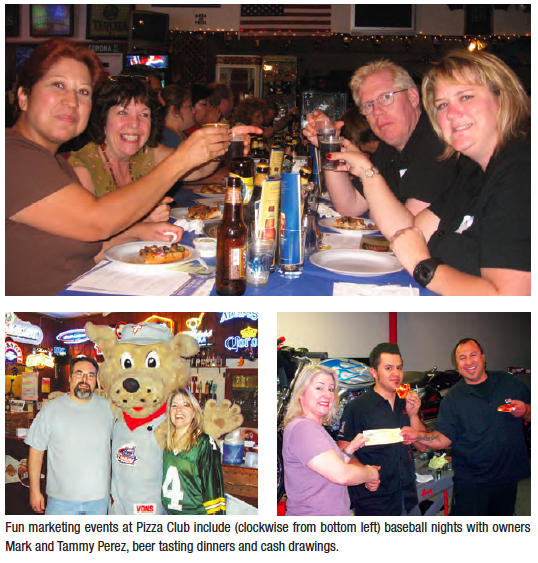 Serving a tasty pie is where success starts for operators, but passion and enthusiasm—even love—can make a difference, too. In that respect, Tammy and Mark Perez from Pizza Club (www.piz zaclublahabra.com) in La Habra, California, have a healthy bottom line indeed. When they started their venture in 2004, the couple dived into the pizza waters without any previous experience in the food business.

“We knew nothing,” laughs Tammy Perez. “Obviously, we made a lot of mistakes, and hopefully we learned from them, although sometimes I’m not so sure! But we love to eat and drink and have fellowship.” Perez says she wanted their establishment to have atmosphere as well as good food, like the pizzerias she knew in her childhood.

“I remember going to the old Shakey’s, and it had the look and the smell of a neighborhood pizzeria—even some of the gentleman who worked there had long, thick mustaches.” And, while husband Mark sports a goatee, they both know it takes more than facial hair to keep a pizza operation thriving, especially in attraction-laden Southern California (La Habra is located in Orange County, also home to Disneyland and Knott’s Berry Farm). “Our goal has always been to market ourselves as a nice place to hangout, have pizza and have fun,” she says. “And occasionally raise money for worthy causes.”

The Perez family faces the quandary of every pizzeria: deciding which promotions work best and how often to run them. When dealing with charitable organizations—raising money for the local Boys Club, for example—it’s critical to correctly calculate the charitable donation without hurting the margins of the weekly tally. “It varies with the situation, of course,” Tammy says, “but 10% is sort of our template figure. We’ve done more when we’ve had matching partners.”

The Perezes complement their fundraising and weekly promotions with a homey atmosphere like the one Tammy remembers from her youth. Pizza Club’s walls are festooned with sports posters and memorabilia (the Dodgers, Angels, Lakers and Ducks are all local favorite teams that each have specials, and customers can view the game on the store’s big-screen TVs). Pizza Club seats 113 on bench and picnic table seating next to a game room with more than 25 machines. The kitchen, like the Shakey’s in Tammy’s memories, has a large plate-glass window so that customers can watch pizzas being tossed, toppings being chopped and their orders being hoisted into a 10’-high brick fireplace.

The family atmosphere is a reality, not just a marketing ploy: “I’m the only one who doesn’t throw,” Tammy laughs. “Even my daughter Alissa can throw.” In addition to Alissa and Mark, son Casey can also be found working, and even grandma Irma is known to pitch in. Not that the Perezes don’t have marketing ploys; their online calendar shows that something is going on—or being promoted—almost every night. We talked with Tammy to find out about the marketing techniques and charity involvement that allow Pizza Club to thrive in their community. 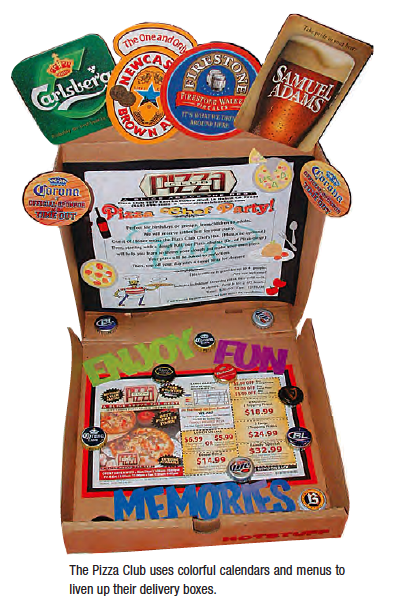 Tell us how you promote online ordering to your customers.

We did a really hard push for online ordering at the beginning of the year. In January and February, people who placed an order online had their names automatically put on a list for a drawing for $100. In March and April, the drawing was for the video game Guitar Hero III: Rock Legends. We’re skipping this quarter, and then we’ll come back at the end of the year with what we call our “Made Service” promotion. This, again, is for online orderers; the winner will get discount pizzas every week for a month, and we’ll have it already made when they come by.

How do you put your own twist on conventional promotions?

When people ask for a gift certificate, instead of just giving them a piece of paper, we give away a Make-Your-Own pizza for four. Four people can come in and we’ll set up and area for them, and they can build their own pizza. We also do Pizza Camp, where counselors bring in all of their campers to make their own pizzas. We do birthday parties like that, too (we partnered with our local bakery—they make a cake that looks like our Works pizza), and we give them a tour. All of our promotions are different. We have a very successful promotion where people bid on being our bartender for the night. All of the money goes to charity, and all of the bartender’s tips go to charity as well. People love to see their local pastor or schoolteacher pulling a beer. (Pizza Club serves beer, wine and sodas.)

What other advertising do you do?

We do Money Mailers about every quarter, which is a little higher-end Valpak kind of thing. We don’t use Penny Saver because our price points run a little higher-end, and we try to avoid the coupon clipper strategy. We also advertise in sports programs; we’re a gold sponsor for Pop Warner, Little League baseball.

Is there anything different in advertising you might try?

I’m contemplating movie screen advertising here. It’s expensive but feels like it’d be a good investment. We’re thinking that with the price of gas, people aren’t going to be traveling out of town like they used to. We think people will be going to all of the big summer blockbusters, like Indiana Jones and Batman. Beer specials on Lakers nights are so tired. We do a lot with the Boy and Girl Scouts, and we’re a Toys for Tots collection spot. We open early, at 10 a.m., during football season when the games are on television, so we serve a breakfast pizza. We also do wine tasting and beer tasting dinners.

What’s the key to making these promotions work?

We’re trying to get our vendors to participate with us in marketing. Sometimes it’s hard for independents to do that because some vendors might think, ‘Well, you’re not going anywhere.’ We’ve been blessed to work with Samuel Adams, the beer company, which really helps us with our beer tasting dinners. The dinners cost $30, and we give a third of that to whatever group we’re raising money for. We serve a five-course meal with five courses of beer or wine. The beer tastings are more popular than the wine. For summer, we’re doing a Beer Fest, which will include 24 beers in 12 weeks. We’re picking countries and continents to feature.

These promotions are also a great way to give back to the community, aren’t they?

Oh, yes. We do promotions for the Challenger program, a group that gives emotionally and physically disabled children the opportunity to play flag football and cheer. We hosted a sign-up night, when the families come in and have a mixer, and the kids can meet some of the coaches and the Challenger staff and get signed up. We donated 10% of our receipts that night to the organization. That’s a heartbeat for me.

Do you use email to stay in touch with your customers?

Email is probably my No. 1 method of repeat contact; I do one every two weeks. We have our calendar online on our website. We’re not big on mass advertising. It’s so expensive, and I think we would get lost. When I do Money Mailer, I push hard to get the window; sometimes I do, sometimes not. With every pickup and delivery, we include our calendar.

Are you considering future expansion?

With the economy the way it is, we feel lucky just to be here. The economy has been brutal for independent operators. It’s not going to get much better. We did have our eyes on a second location in Fullerton, but we’ve pulled back on that. Whatever we do, it will definitely include food. We’re a neighborhood pizzeria, so I only concern myself with a four-mile radius around our store. Our delivery is almost becoming service-oriented. We had a call today to deliver a dinner to a schoolteacher who was sick. That’s what I mean when I say I feel like we’ve arrived as far as being thought of as part of the community. That’s one of the reasons we love what we do.

Are you a marketing marvel? Contact us at editor@pmq.com to tell us your story!