All the fun and pizza you can eatza - PMQ Pizza Magazine 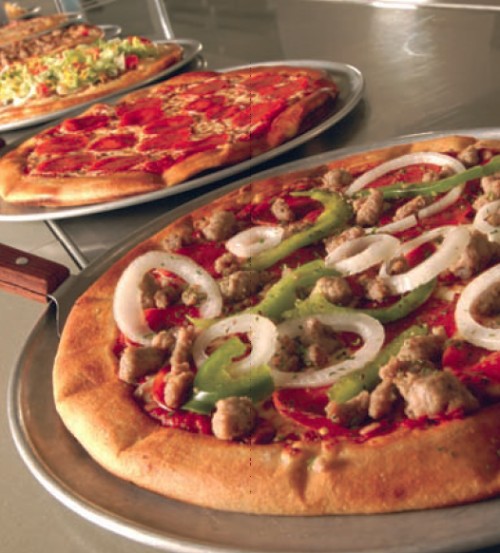 Eatza Pizza, the Scottsdale, Arizona-based franchise, has taken an entirely new approach to its "all-you-can-eat" pizza buffet concept. Since first opening its doors in the Phoenix market in 1997, 77 Eatza Pizza restaurants have opened or are under current development in 11 states. Eatza Pizza's new approach includes a greater emphasis on customer service, the introduction of an expanded buffet with over 18 feet of pizza, fresh pasta, Zatos (a breaded and fried potato proprietary recipe), a salad bar, and even fried chicken and macaroni and cheese for children and diners who may not want pizza. New colors, uniforms and logos also brand the store's concept. The new branding also includes the addition of 700-1,000 square feet dedicated solely to gaming, which helps entertain children (and probably some adults too).

Building from the brand up

Eatza Pizza's public relations consultant, Tony Kingsbaker, said, "It's been a two or three-pronged approach." After the company was purchased by a new owner in December, 2003, new restaurants are being introduced rapidly with nearly 65 new units on the drawing boards. "They recognized the fact that the restaurants needed a face lift, so they went into all of their existing stores and redesigned the look and flow of the buffet, and completely revamped their look to create a totally new image," Kingsbaker said.

"Our media relations efforts centered on approaching national publications," Kingsbaker said, "including national pizza trades and restaurant magazines." "The biggest thing we were able to do was to establish close ties with the media," he added. "We recognized the fact that we needed to cultivate relationships with people in the media, because that's a very important part of reaching out to our public."

Kingsbaker said that initial efforts involved working with the local media (in Phoenix, Arizona) to reposition the company in its home market. "We addressed the local media first and then developed media relations programs for regional and national trades."

Eatza Pizza's vice-president of marketing, Kim Gouch, said the most important part of the re-branding process was spending time understanding the atmosphere and ambience of the restaurant. "We researched consumer data and merchandising trends to help us develop our new look," Gouch said. "We took a whole new approach on the color palette with more vibrant tones: tomato red, various shades of yellow, and accent colors of aluminum, black, and polished wood," she added. Gouch affirmed that setting the mood via a unique color palette was crucial because customers "need to feel like they are in a soothing atmosphere."

Getting people through the door – and knowing who and why

One of Eatza Pizza's primary goals was getting the customer into the restaurants and then exceeding their expectations. According to Gouch, several things needed to be accomplished in order to achieve these goals.

"One of our main goals was to create a greater variety," she said. "Most people come to Eatza Pizza because they want pizza, but they also want a variety of choices. That's why we offer at least 18 different varieties of pizza, along with the salad bar, Zatos, desserts, fried chicken, and macaroni and cheese, which has a great appeal to children. In addition to offering variety, we also offer value and the gaming concept, which is also an important component to our success," Gouch said.

Measuring the effectiveness for Eatza Pizza's strategies come in several forms, Gouch said. "We keep up with who's coming, how often, and what they like by offering customers a one-on-one survey when they pay for their meal. We also track customers with the 'Repizza card', which is collected when a customer pays for his/her meal."

Although Eatza Pizza was unable to provide any statistical information regarding customer traffic and sales averages, Gouch did say they have seen a high return rate. "Where we used to see the customer once a month [prior to the re-branding], we are now seeing them come back an average of four times a month," she said.

Eatza pizza has also employed a coupon delivery system on their receipt printouts they give to customers. The coupons offer the customer one dollar off their next buffet ($5.99 for adults, $4.69 for children under 10, and free for children under three). The coupon expires after seven days, but Gouch said they are seeing high redemption rates adding to the number of repeat customers.

Eatza Pizza's 12-inch pies are always fresh since it is corporate policy to throw away uneaten pizzas that have been out of the oven for more than 20 minutes. Although Eatza Pizza makes almost any combination of ingredients available on their pies, the most popular seem to be pepperoni, sausage, and cheese, along with their specialty pies. Specialty pies include: a Sicilian deep dish, a garlic cheese bread pizza, chicken Alfredo pizza, and Tostacon "a pizza that is like a burrito, with beans, cool ranch sauce, cheese, lettuce and tomato, and sprinkled with corn chips."

Eatza Pizza's game component has proven to be an important aspect of drawing customers. "Families with children can come into our restaurant and have a good time while still paying less than $25 for a meal," Gouch said. "The children can roam back and forth from the game room, where they can play games that disperse tickets redeemable for prizes, while mom and dad catch up on the latest sports or news from one of our many televisions that are located throughout the restaurant." The customer who wants to enjoy a more serene restaurant atmosphere can easily avoid the game room because the restaurants are set up with low dividing walls that keep the gaming area separate from the rest of the dining room.

Eatza Pizza has made the right moves in promotion, from employing a seasoned management team that recognizes the importance of public relations and marketing. Kingsbaker said the best way to let the public know what's going on within the restaurant is to not saturate the mailboxes of writers and editors with uninformative press releases and information, but to recognize what the media's interested in. He also emphasized the importance of media training for senior management employees who interact with the media.

"We primarily use print," Kingsbaker said, "because it is difficult to tell the Eatza Pizza story in 30-second sound bites, as in television or radio ads." Gouch said incorporating different mediums for different markets also plays a big role in the effectiveness of advertising. "I won't use one cookie cutter approach across the board because it's not always effective," she explained, pointing to the fact that the company has tried every type of medium for advertising and hasn't found one more successful than any other. "The key is in knowing the general trends of the specific market," Gouch said. "We look at market penetration for statistics – who's watching TV, who's listening to the radio, and to which stations. Just by understanding the general trends of the marketplace, you can certainly apply different media vehicles that help you get the attention you need."

Involvement in charity organizations is also an important factor for the company. They are working on a new charity program for community affairs that they hope will help generate television exposure. "It's a program that involves underprivileged kids in Haiti. It will be a very visual program that will tug at people's hearts," Kingsbaker said.

Earlier this month, Eatza Pizza announced it has recently been awarded the franchise rights for its 100th store. More information on Eatza Pizza can be found at their website: www.eatzapizza.com