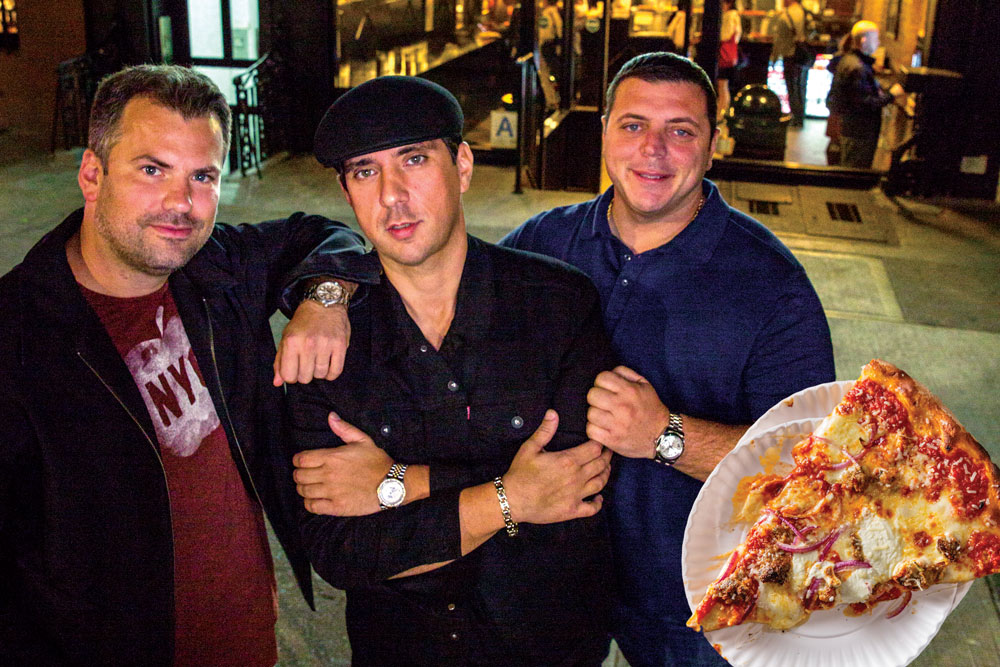 They know the score and tell it like it is.

They’re not afraid of hard work.

They take pride in their pizza craft.

But they’re also quite unlike the stereotypical New York pizzaiolo: that guy who thinks he knows it all.

Since its 2008 opening, their tiny pizzeria in Manhattan’s East Village has created a whirlwind of success for these seasoned pizza guys—a blueprint that every location has followed since—and they’re still learning on the job. So what’s their secret?

Garcia and Basille literally grew up in the industry; from their great-grandparents down, relatives have owned everything from sandwich shops and bakeries to restaurants and pizzerias. Fittingly, a venture that blended both families would spawn their signature pie: Basille’s mom had a restaurant in Staten Island, which Garcia’s mom took over in the ’90s. In 2006, Garcia, then 29, started making artichoke pizza at the restaurant.

“When customers came in, I’d take a piece, cut it into strips and put it into a bread basket for free,” he recalls. “It was a huge hit. People would freak out, order it on the spot, come in the next day, take it home. I told everyone, if we had a place in Manhattan, we could hand it out to more people in a week than we could in six months in Staten Island. Our parents told us we’re crazy—the rents are too high, there’s a pizzeria on every corner. And why commute to Manhattan when you have your family’s restaurant to take over one day? But that approach kinda felt like a slow boat to China.”

Of course, Manhattan rents were prohibitively priced. But they needed only a hole-in-the-wall to serve three pies: Artichoke, Margherita and Sicilian. One day, Garcia was driving a friend to a doctor’s appointment when he spotted a guy hanging a “for rent” sign in a cell phone store on 14th Street in the East Village. “I walked in and asked him, ‘Can we put pizza in here?’” Garcia says. “He said, ‘Well, it’s kinda small’—less than 400 square feet. I said, ‘I think I can make it work.’”

But the move wasn’t based on blind faith. For two weeks, Basille and Garcia sat outside and tapped a clicker as people walked by, recording every hour of the day, every day of the week. “We figured if we could get 1% of the people to come in half the time, we could make a great living,” Garcia says. They signed the lease.

The cousins prepped the place on a shoestring, tapping their network of family and friends for electrician, plumber and carpenter work; buying used “junk” equipment on Craigslist; and building up the shoebox-size shop with their grandfather’s toolbox. After opening, marketing was nonexistent. “We didn’t know what a PR firm was,” Garcia says, laughing.

They would soon learn. But they’d end up never needing one.

When Garcia and Basille got word that Artichoke Basille’s would be featured in New York magazine’s 40th anniversary edition just two weeks after opening, they thought, “That’s cool.” Little did they know the story, which awarded the pizzeria with a three-star review, would propel a flurry of newfound fans. “All hell broke loose; there were lines down the block every day,” Garcia marvels. “We couldn’t keep up with it. We’d sleep in the car.”

Still, expansion was inevitable. Garcia and Basille partnered with the famed Tao Group (whose owners were Artichoke fans), which operates swank nightclubs and restaurants from New York to Las Vegas, to transform a “stinky biker bar,” underneath the High Line elevated park in Chelsea, into a second pizzeria. The location, between two of Tao’s biggest nightclubs, quickly became a “monster” (in a good way). A third opened with Tao on Greenwich Village’s late-night go-to, MacDougal Street.

“The brand has become synonymous with nightlife. We thrive in these districts,” Garcia explains. “We stay open until 7 a.m., so it’s almost a 24-hour operation in Manhattan. In the beginning, we didn’t get many late-night customers, but we stuck it out. We knew it’d become a destination because it was always open.” Soon, it wasn’t unusual to spot a 100-deep line at 4 a.m., and two more locations followed in LaGuardia Airport and Astoria, Queens.

Naturally, famous fans followed: a stream of actors, athletes and musicians would visit after clubbing, landing the pizzeria everywhere from the New York Post’s Page Six celeb gossip column to TMZ. Megastars like Justin Bieber, Miley Cyrus and Leonardo DiCaprio were regulars; basketball player Carmelo Anthony would pop in for a late lunch; rapper Busta Rhymes requested a pizza party. With that kind of attention, it was only a matter of time before the cousins would get a taste of their own celebrity.

Who wouldn’t jump at the chance to travel and eat pizza? When Garcia and Basille met a producer who pitched a concept that would become the Pizza Masters TV show, they wisely replied, “Can we talk about Artichoke?” The answer was yes. “Three weeks later, we were traveling around the country,” Garcia says. “We did that for almost four years. It was an amazing experience.” (The third episode of the show’s second season even featured a visit to Thea’s in Miami, the cover subject for PMQ’s November 2016 issue.)

The TV show took the cousins—who are also best friends—out of the restaurant for a time, and it was still hard work: one week of early-morning, late-night days for a single 22-minute episode. But the gamble paid off through even more media exposure. “There we are on Jay Leno with Howie Mandel—it was surreal!” Garcia says, laughing. “We were on Late Night With Seth Meyers; we’ve been on The Rachael Ray Show a dozen times, on Good Day New York and Good Morning America.” They even penned a cookbook, Staten Italy, featuring Italian comfort food faves from their family’s vaults.

And the cousins didn’t waste the opportunity to note tips and tricks for their own enterprise. “Doing the TV show, we picked up so many things,” Garcia says. “When we’re driving and see a place we’ve never been to, we’ll pull over and try it. Everyone should try different restaurants and pizzerias, try the competition, do their homework, ask questions, try to learn. People who say, ‘Mine’s the best,’ I think they’re idiots. How can you say you know everything? It’s impossible. We’re always open to learning and trying new things.”

After the TV show wrapped, the pizzeria’s rapid expansion resumed. In the last year and a half, seven locations have opened with the same hands-on approach as the first: The cousins, using their own money, personally scout locations, source equipment, and handle design, layout and building—saving both money and time.

Today, Artichoke Basille’s boasts 12 outlets. Several are in Brooklyn—Park Slope, next to Barclay’s Center; hipster-riddled Bushwick and Williamsburg; and old-school neighborhood Bay Ridge. Others are in far-flung locales—like the one opened in 2013 by a longtime employee in Berkeley, California. “That was a big move,” Garcia recalls. “We knew we had some brand recognition outside of New York, but we didn’t know how much. We were shocked—so many people knew it! It was immediately making money. We said, ‘Wow, we can probably put these in a lotta places!’”

Indeed, no matter the setting, Artichoke Basille’s seems to succeed—from its odd-man-out airport location, now going strong for seven years, to its last two ventures, in Miami and in a lower-Manhattan food hall concept. “Every time we see a good opportunity, we pursue it,” Garcia says. “They don’t all work out, but we’ll try. If not, on to the next one.”

Sometimes, as with the food hall, a move requires a bit of convincing. For example, Fransmart had been approaching the cousins for years to make a franchising deal, but the self-professed “proud restaurant guys” resisted. “This is our legacy, and we wouldn’t even consider it. Me and Sal felt like we could conquer the world—by ourselves,” Garcia explains. “But as we opened more locations, you learn there’s only so many hours in the day. You physically can’t.”

Joining with Fransmart, the duo now seeks aspiring pizzeria owners to own their slice of the Artichoke Basille’s pie; they just signed their first deal for five locations in New Jersey. And, ever on the lookout for ways to work smarter, they’ve turned over their beloved artichoke sauce to a concentrate co-packer; are almost done fine-tuning their supply chain; and are even looking into new technology to streamline pizza making—such as conveyor ovens vs. the deck ovens they use now. “Every day’s a learning experience,” Garcia says. “We’re growing and learning at the same time.”

Of course, Garcia and Basille know that once you hit a popularity peak, the tides can soon turn right back against you. “A lot of people lose love for you. They say you sold out or whatever,” Garcia says. “But let’s be real: We all want to grow, make more money and be more successful. We had overnight success, which just snowballed into more press and popularity. But even if you paid for all of that, which we didn’t, you can’t keep it going for 10 years. If people try it and don’t like it, they’re not gonna keep coming back. You can’t fake that. You can only create hype for so long.”

So the cousins maintain their original approach to media attention: Whatever happens, happens—organically. They also stick to their early motto, “Keep it stupid-simple.” With a mere five slice/whole-pie options and many locations that clock in at hundreds, not thousands, of square feet, the cousins practice what they preach. “You can’t try to appeal to everybody, be everything,” Garcia explains. “You see the size of some menus, and they have no identity. How can all of that stuff be good? If you believe in something you make, focus on that. Trying to do too much is not a good idea.”

And, in a tight-knit Italian family that’s still teeming with restaurant masterminds, Garcia and Basille have a couple more secret weapons: perspective and an unbreakable bond. “To us, success is being able to take care of our moms and families, making them proud, keeping our family’s legacy going—that’s our biggest accomplishment,” Garcia concludes. “Me and Sal, we don’t even have an agreement on paper. We split everything to the penny. To have someone you love to be with and can be in business with, can trust, can lean on, it’s a blessing. We couldn’t have done it without each other.”