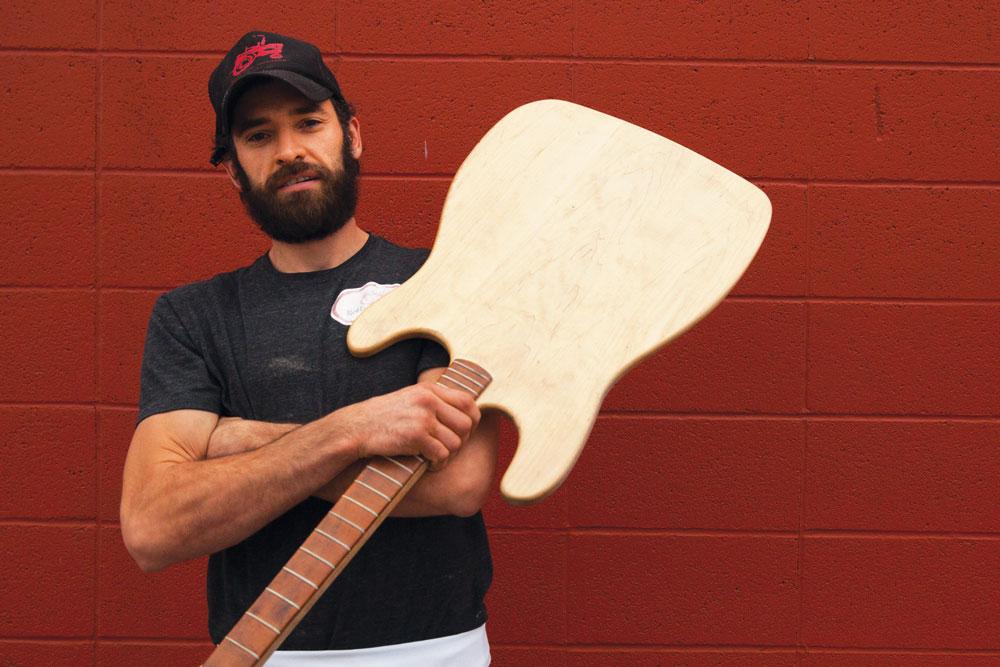 Folks in Montana have lived off the land for centuries. Crow and Blackfeet warriors once roamed these frozen plains, hunting buffalo and fishing the teeming rivers. Later came the pioneers, who tilled the hardscrabble soil to grow potatoes and beans, and the ranchers, with their vast herds of cattle that still graze the far-ranging prairies.

Admittedly, Eastern-bred pizzaioli like Adam Paccione, co-owner of Red Tractor Pizza in Bozeman, arrived late to the scene. But once you’ve moved into Big Sky Country—even if you’re a native New Yorker—the land tells you how to live, and you listen. You grow out your beard, you raise your own vegetables, and you make the best pizza you can make with locally grown, organic ingredients.

“It’s basically the way [co-owner Tiffany Lach] and I eat, and we believe that’s the way everyone should eat,” says Paccione, who opened the farm-to-table restaurant with Lach in early 2015. “When you work with organic ingredients, food tastes the way it should. Our goal is to educate people on why it’s important to eat locally and sustainably—because it’s an investment in yourself and your community.”

“When you work with organic ingredients, food tastes the way it should. Our goal is to educate people on why it’s important to eat locally and sustainably—because it’s an investment in yourself and your community.”
—Adam Paccione, Red Tractor Pizza

The big red tractor parked out front is the first sign that this is not your ordinary artisanal pizzeria. Make no mistake—Paccione has big-city tastes, using ingredients like roasted Brussels sprouts, salted capers and white truffle oil to make his wood-fired pies. But Paccione, who grew up working in his father’s pizzeria, is no snob. He likes to get his hands dirty, volunteering at local farms and helping to grow some of the very food he serves to his customers. “My dad was also a great gardener, and I’ve been by his side, learning about growing things, as long as I’ve been cooking,” Paccione says. He’s a firm believer in organic farming, not just because he cares about sustainability, but because organic food tastes better, he says. “Modifying a crop to increase yields and size and to be more resistant to disease and pests also sacrifices flavor,” he notes. “That’s really important to me from a chef’s standpoint.”

​Paccione and Lach became partners in Red Tractor almost by accident. Paccione was planning to start his own restaurant when he applied for a short-term job at Lach’s other Bozeman eatery, Sola Café. “Tiffany’s application was more personal than most, and she asked what some of my passions are,” he says. “I explained in detail how I was in love with ’za!” Once they met in person, he adds, “We immediately hit it off. We were on the same page with everything—lifestyle, community, food, values—everything.”

Before long, they had forged a partnership to start a new restaurant with pizza as the focus. “Honestly, I was expecting a 10% to 15% stake in the company,” Paccione recalls. “She must have seen the fire in my eyes and the passion in my heart, because she offered to let me buy in for 50%. We opened seven days later!”

When Lach chanced upon a big red tractor—an Allis-Chalmers model, circa 1938-1948—at a nearby farm, the name for the new pizzeria seemed obvious. With Paccione seeking out as many local ingredients as he can find, the tractor serves as a powerful symbol of the company’s dedication to the community and the area farmers who fuel Red Tractor’s menu. “We try to keep our dollars in Bozeman as much as possible,” he says. “It’s hard in the winter. We’re in the Northern Rockies and have one of the shorter growing seasons in the country. But there are some awesome local organic farms that do a really good job. My meats are local all year-round. Earlier this winter, I managed to keep a local root veggie salad going, and then I started getting local hoop-house spinach. I think it’s cool to have at least a little local produce all year.”

And what Paccione does with that produce is pretty cool, too. He describes his traditional crust as “New York-style with a Bozeman twist.” Made with organic Montana flours and a dough starter, “it’s quite a bit airier and more developed than a traditional New York style,” he says. He also offers a sprouted grain crust that he describes as “a really hearty, whole-wheat crust. We germinate three types of grain berries—kamut, oat and rye—and mix them in the dough. It has Neapolitan qualities, such as a chewier crust, which I love.”

Paccione can barely contain his enthusiasm when he talks about these sprouted grains. “There’s a story behind the kamut berry,” he continues. “Some Montana grain farmers took a trip to the pyramids [in Egypt] and somehow acquired some ancient kamut berries from one of the tombs. They brought them back to Montana and germinated them, and it worked. At the time, it was the only kamut farm in the world—right here in Montana!”

There’s also a story behind a signature pizza called the Bill Murray. “We came up with this special one day—garlic sauce, dates, bacon and Gorgonzola, finished with a sherry-honey reduction,” Paccione says. “We had no idea what to call it, and an employee suggested ‘the Bill Murray.’ He figured that, if it didn’t sound appealing to folks, they would still buy it because of the name. It’s one of our bestsellers now. I have made it a goal for 2016 to get Bill Murray in here to try the Bill Murray!”

“Social media has been great for us. It’s basically our marketing strategy. It even got the attention of the Cooking Channel, which was how we ended up on Pizza Masters.”
—Adam Paccione, Red Tractor Pizza

If Murray watches the Cooking Channel, he may already know about Red Tractor. Thanks to its uniquely tantalizing farm-to-pizza menu, the little shop was featured in an episode of the Cooking Channel’s Pizza Masters in 2015. It also doesn’t hurt that Paccione is a fun and charismatic character in his own right, which shows in the customer experience at the family-friendly pizzeria. If the kids get bored waiting for pizza, servers bring them a game of Hungry Hungry Hippos or a pair of Rock ’em Sock ’em Robots. Talented musicians can always land a gig there, while local artists exhibit their works for sale without having to pay a commission.

The pizzeria’s perks, plus digital platforms like Facebook, Twitter and Instagram, have helped create powerful word-of-mouth around Bozeman. “Social media has been great for us,” Paccione says. “It’s basically our marketing strategy. It enables us to do what we want and present ourselves to our audience in the way we want. It even got the attention of the Cooking Channel, which is how we ended up on Pizza Masters.”

After just a year and a half in business, Red Tractor has become deeply embedded in Bozeman, supporting fundraisers for school and civic groups and the local arts. In keeping with its farm-to-pizza mission, the pizzeria also partners with Gallatin Valley Farm’s Farm-to-School program to get more locally grown food into school cafeterias. “If we teach kids, at an early age, about eating and purchasing locally—and seasonally as well—it becomes the normal way of life by the time they’re teenagers,” Paccione says.

In fact, Paccione has more ideas for helping the community—and encouraging local food consumption—than time to implement them. “I also hope to get a grant to fund an environmentally controlled indoor grow room to produce our own food but, more importantly, I want to incorporate it into an after-school program, where I would teach students the basics of gardening and then flow that into the basics of foodservice.”

Meanwhile, Red Tractor’s reputation for great food and a fun customer experience continues to spread. “We hit our one-year mark on January 6, 2016, and our sales more than tripled what it cost us to open our first year,” Paccione says. “We hope to stay on that track for year two.”

The competition for the pizza dollar may be fierce in Bozeman—it’s home to Montana State University, for starters, and growing rapidly—but it’s not half as fierce as Paccione’s passion for Red Tractor and his adopted hometown. “I could talk for hours about this place,” he says. “They say, ‘Do what you love and you’ll never work a day in your life.’ Well, I haven’t worked in 13 months, because I’m in love with this place, with my staff and my community, and with everything else that surrounds me.”