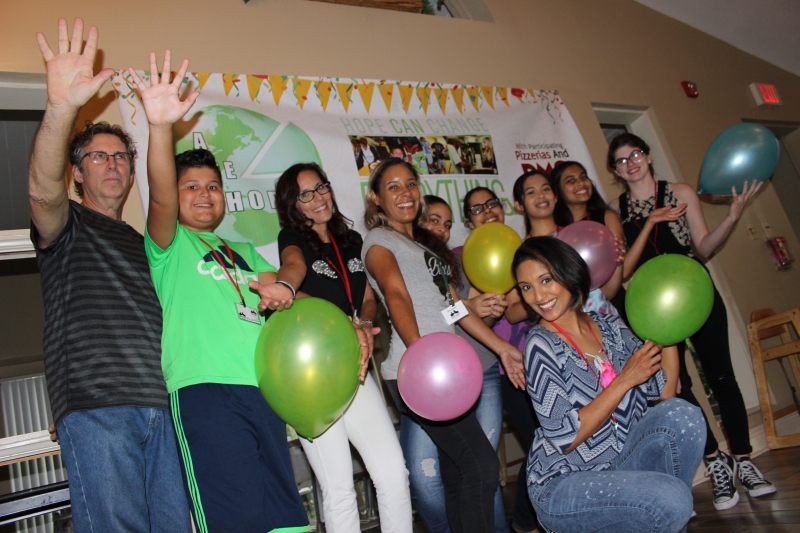 Sunita Sukhraj with volunteers at a pizza party in Orlando, FL.

A Slice of Hope is a passion born out of empathy for the impoverished. As its founder, Obaid Kadwani said, “We want to reach as many people all across the country as well so that everyone can realize that we have the power to make a happy moment for a person in need. Together, we can make the world a kinder and more caring place.”

Now spanning 25 states, this mission isn’t possible without dedicated volunteers like Sunita Sukhraj who has been involved for a decade.

Born in New York, Sukhraj moved with her family to Florida in 1989 where she has lived ever since. She got involved with A Slice of Hope just a few years after it began.

Sukhraj recalls the first time she threw her pizza party in 2009.

“It was at the Orlando Union Rescue Mission,” she said. “People were so grateful for hot pizza that I just couldn’t believe it. In fact, many of the guests shared that they rarely get hot pizza. Something so simple as pizza made such a huge difference to them. Then there was the music, seeing the happiness and smiles on both adults and children. The shelter guests, the faculties, the volunteers would all light up in delight and get on the dance floor to party for a few hours. It was such a wonderful sight to be a part of.”

To her, the best part is seeing the happiness and joy in shelter quests during these parties.

Related: A Slice of Hope to Throw Pizza Parties at Shelters in 20 States in One Week

“This is what had me hooked,” Sukhraj said. “They are enjoying themselves, having fun, and I have a feeling it is something they rarely do given their worries and personal circumstances. Somehow, we help them forget about it for a while. To know that we play a role in bringing happiness and joy to these folks is what keeps us going year after year after year.”

Sukhraj is a full-time software quality engineer who is also a single mother to two daughters, a writer, and a dancer. The Latin dance community which she is a part of has helped her raise funds to host three pizza parties each year.

Sukhraj said that after her first party in 2009, she began throwing two pizza parties the next year. Six years later, her circle of charity helped increase the parties to three which they’ve been doing since then.

“Fundraising can be challenging at times,” she said, “otherwise we would try to throw more pizza parties at more locations, and we also try to do this more frequently.”

Despite having a full schedule, she is passionate about “inspiring others to love themselves and creating a world filled with kindness, happiness, and love.”

“These parties are just a small way of my contributing to the best of humanity by giving back to others,” Sukhraj said. “There’s more to life than just waking up every day, going to work, and performing that repetitive routine. My desire is to make a difference in the lives of others, and A Slice of Hope gives me that opportunity each and every year. It is my hopes to create more time and opportunity to give back to humanity.”

A Slice of Hope is seeking a local pizzeria in Las Vegas to volunteer at Calvary Downtown Outreach on June 22, 2019.

Sukhraj emphasizes that volunteering for this organization is incredibly rewarding.

“My hope is that volunteers and participants recognize that they help light the way for others,” she said. “We learn through these parties that we have the power to rekindle hope in the hearts of others. It is my hope that volunteers and participants recognize that through these acts of kindness, we make a difference in others’ lives.”

Tell us what you think at