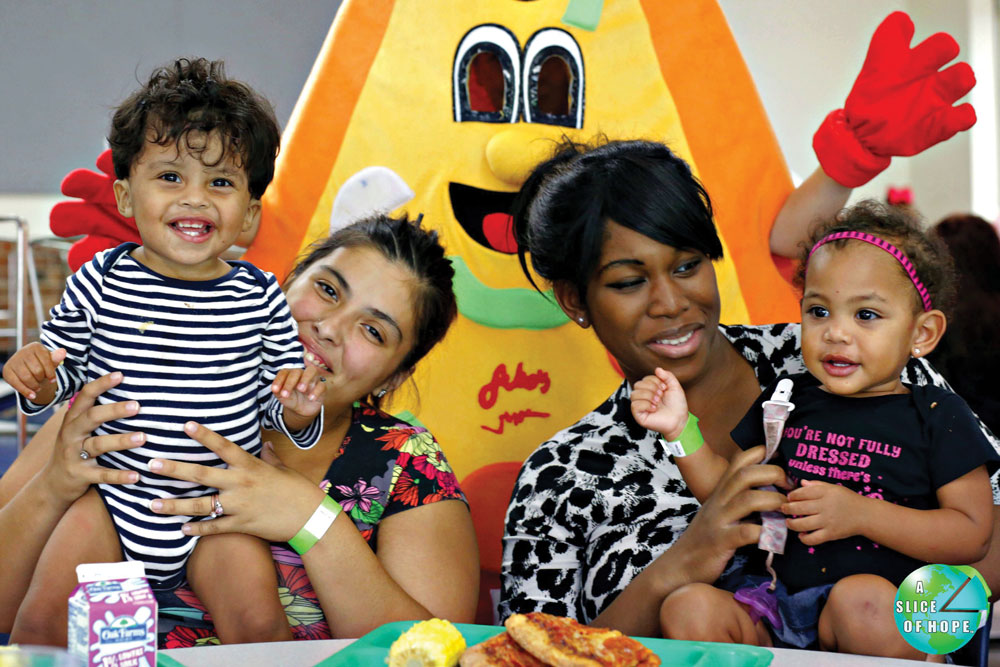 A Slice of Hope, the national hunger-awareness advocacy organization, will hold this year’s A Slice of Hope Week from June 19 to 25 in cities around the country, with PMQ Pizza Magazine as a partner in the cause. The nonprofit, founded and led by New York-based Bollywood actor and TV personality Obaid Kadwani, organizes volunteer-led “parties of hope” at homeless shelters and food banks in conjunction with local pizzeria operators who donate pizza and beverages for free or at significantly reduced prices.

A Slice of Hope’s mission is to use America’s favorite food to spread joy and hope to people in need of a kind gesture from a warm heart. Pizza restaurants—chains and independents alike—are important partners in the effort, donating food to locations like the Barron Heights Transitional Center, a Memphis, Tennessee, facility for veterans, where PMQ staff joined the festivities last year. “Hunger is a national epidemic in this country,” says Kadwani, an Indian immigrant who saw close friends lose their homes and go hungry while he was growing up on the tough inner-city streets of New York. “There but by the grace of God go any of us. So A Slice of Hope feeds the body and the soul by creating a day of uplifting celebration and motivation, offering not just a hot meal, but entertainment, information and emotional support to individuals seeking a better life.”

Kadwani’s primary goal is to inspire and uplift people who are living through difficult circumstances. He believes in the power of pizza—the ultimate sharable “community food”—to do just that, and he knows that shelters are the place to start. He points to one Slice of Hope volunteer in the Philadelphia area who now feeds souls in the same shelter where she sought refuge in 1998. At the time, Belinda Ashley was a desperate, pregnant 19-year-old with nowhere else to turn. She lived in the Life Center of Eastern Delaware County in Upper Darby, Pennsylvania, for a year. Although she miscarried only a month after arriving at the shelter, she credits the hot meals and warm mentorship she found there—particularly from shelter director Jim Shelton—for turning her life around. “I came from a very religious family,” Ashley explains. “I couldn’t tell them where I was because of the pregnancy, and no other relative would take me in. The stress of the whole situation was intense.”

The shelter provided a temporary home for people dealing with drug and alcohol addiction and, in many cases, a destructive lack of focus on the future. But Shelton looked into the eyes of the proud young Ashley and saw brightly burning determination. “Jim was a retired Presbyterian minister, and we joked and cried together,” Ashley recalls. “He was never judgmental or harsh. He believed in giving people chances.”

“I look at the kids who come to this wonderful A Slice of Hope event and the adults who are dealing with their own demons, and I appreciate how fortunate I am. I was here once for a helping hand, and I’m only coming back for one reason—to offer my hand to those who need a chance for a better life.”
—Belinda Ashley, A Slice of Hope volunteer

From Desperation to Determination

After a tough year in the shelter, Ashley got her chance at a real job, working for a food catering company that served meals to students and trustees at an affluent private school. By 1991, she was living in her own apartment. “In the time I was in the shelter, I saw quite a bit,” she says. “For most of that period, I was the youngest person there. I wasn’t interested in being part of a lifestyle that involved drugs or alcohol. My overriding purpose was to find a good job, save money and find a place of my own to live.”

Ashley later moved on to a job as a convenience store clerk and was quickly promoted to shift manager. But the forward-thinking woman knew she needed to climb out of the cycle of low-paying jobs to fulfill her dreams. She found an opportunity with a high-end kitchen equipment firm and excelled there, rising through the ranks while earning her associate’s and bachelor’s degrees online. “I loved that job and worked there until 2011,” Ashley says. “Unfortunately, in 2009, I was diagnosed with multiple sclerosis and started to experience vertigo. When a major corporation bought and closed our store, they offered to relocate me, but I thought the new site, in a sketchy part of town, might be dangerous. Although I wanted, more than anything, to keep working, I was forced to take severance.”

As her health declined further, Ashley’s only option was to accept disability. Today, she collects about half the income she was earning at her last job. She has struggled during the past five years to make ends meet, keep up with her medical treatments and combat the cognitive loss associated with MS. But this Philly fighter chose to follow in Rocky’s footsteps and put her energy into helping others. “I saw a story on TV about A Slice of Hope in 2010, and when I saw a picture of Obaid, I said, ‘I know who that is—he’s the host of my favorite TV show,’” Ashley recalls. “I emailed him and asked if he would be interested in someone volunteering at the same shelter where she resided at more than 20 years ago. He loved the idea, and I’ve been hosting A Slice of Hope parties at the Life Center ever since.”

Ashley, who lives around the corner from the Life Center, serves as event host, liaison with A Slice of Hope and volunteer recruiter for the annual event. She says economic hard times translate into greater numbers of hungry children coming to the shelter for the pizza party and other meals. “My goal is to expand A Slice of Hope to women’s and children’s shelters associated with the Life Center,” she adds. “For our first year, we had a band, and now we bring back the same volunteer DJ every year. Since there are so many kids, we target the entertainment toward them.”

Ashley empathizes with the people who turn to the shelter for help. “My year in the Life Center wasn’t the first time I’d spent in a shelter,” she says, sadly. “As a young child, I also lived in one for a while. They don’t breed wonderful memories. Even though you’re young, you know enough to understand your family doesn’t have enough food, and you know what it feels like to go to bed at night hungry. I look at the kids who come to this wonderful A Slice of Hope event and the adults who are dealing with their own demons, and I appreciate how fortunate I am. I was here once for a helping hand, and I’m only coming back for one reason—to offer my hand to those who need a chance for a better life.”

The Opportunity to Change Lives

Pizzeria operators can help people like Ashley—and maybe even change their lives permanently—by joining the A Slice of Hope family in 2016. According to Kadwani, there are two ways to serve:

1 Participate in or organize a pizza party at a local shelter.

A Slice of Hope already holds parties in many major cities around the country. View the list of cities and shelters in the “Party Schedule” section of the nonprofit’s website (asliceofhope.org) to find out if there’s already a party scheduled near you. You can donate or offer discounted food to one of those parties, or you can work with A Slice of Hope to create your own party for the shelter of your choice.

2 Host A Slice of Hope fundraiser in your pizzeria.

Proceeds raised for A Slice of Hope help pay for more pizza parties at shelters around the country. A Slice of Hope also seeks volunteers to help organize and manage the parties and musicians to provide live entertainment.

As a sponsor of A Slice of Hope pizza party, pizzeria operators help start a process in which despair gradually gives way to optimism and desperation transforms into goal-driven purpose, Kadwani says. To join this cause, visit asliceofhope.org or contact Rebecca Ruttle at rebecca@asliceofhope.org. You can also call 937-219-8618.