A Slice and a Smile: A New York nonprofit and its pizzeria partners reach out to people in need with pizza, music and hope. - PMQ Pizza Magazine 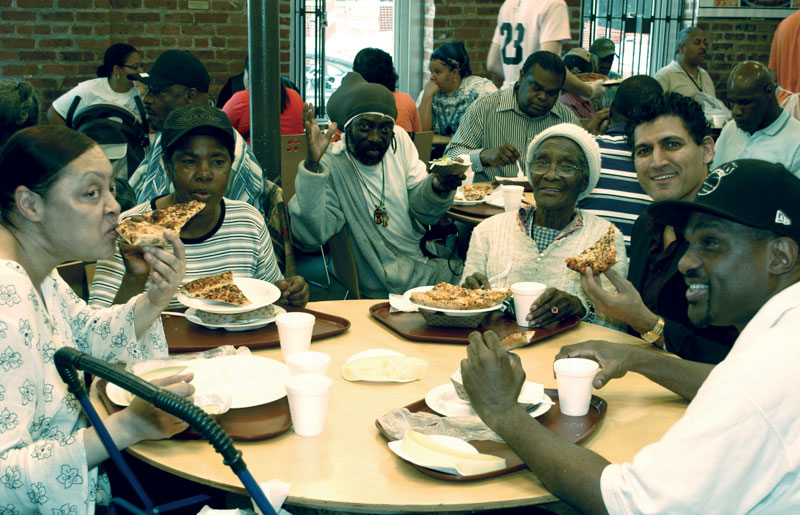 As a child, Obaid Kadwani moved from the overcrowded, poverty-stricken city of Mumbai, India, to the mean streets of the Bronx. It was a step up, but not a big one. The majority of the people of Mumbai, a city of more than 8 million at the time, lived in disease-ridden slums. The Bronx, on the other hand, was plagued with drugs and gang violence, with plenty of poverty of its own. “It was like sink or swim there, especially in the ’80s,” Kadwani recalls.

Kadwani, fortunately, learned to swim. Outgoing and confident, he grew up to become an entrepreneur, actor, producer and host of numerous entertainment shows on the national TV network Namaste America, which targets a South Asian audience in the United States. He’s also the driving force behind A Slice of Hope, a New York-based nonprofit that works with pizzerias to spread joy through pizza parties hosted at shelters and food pantries around the country.

Kadwani’s organization partnered with PMQ this year for the annual Share a Slice of Hope Week, and he says it was “probably our most successful one ever. We threw parties in 36 cities in 26 states and gave away 16,000 slices, each one creating a smile and a sense of hope for our guests.”

After PMQ promoted A Slice of Hope Week in its pages this summer (“Hope by the Slice,” June/July 2015), independent operations like Pat’s Pizzeria (patsfamilyrestaurant.com) in Baltimore and Paxton’s Pizza in Little Rock, Arkansas, came forward during the week of August 17 to 22 and provided pizzas for parties in local shelters and hosted fundraisers on the nonprofit’s behalf. “We are really glad we were able to partner with PMQ and that it all went as expected,” Kadwani says. “Slice of Hope keeps growing as more people hear about it. And we have so many ways—both small and big—that pizzeria operators can help out.”

The Power of Giving Back

A Slice of Hope party typically takes place in a community shelter or organization serving the homeless, battered women, children, veterans and other groups. A Slice of Hope works with pizzerias—both chains and independents—to provide pizzas, beverages and musical entertainment for the shelter’s guests. Some pizzerias donate food for free, while others provide it half-price to A Slice of Hope. Some also hold in-store fundraisers for the organization—in those cases, A Slice of Hope keeps half of the funds and donates the other half back to the pizzeria in the form of sticky notes that serve as prepaid credits for free slices to be donated to the needy. (This promotion was inspired by Mason Wartman, owner of Rosa’s Fresh Pizza [rosasfreshpizza.com] in Philadelphia, where customers donate free slices via sticky notes pinned to the store’s wall.)

Kadwani dreamed up the Slice of Hope pizza party concept nearly 10 years ago. He believes pizza makes everyone happy, and music lifts their spirits; a combination of the two, plus a dose of compassion and kindness, inspires hope and perseverance for people struggling through difficult circumstances.

But pizzeria operators get something out of it, too, notes Peter Anastasi, owner of a Pat’s Pizzeria in Baltimore, which provided pizza for a Slice of Hope Week event at the Bea Gaddy’s Women and Children’s Center. “This event did even more for us than for the people we were blessed to serve,” Anastasi says. “My staff and the volunteers will forever remember the smiles and the feeling of the true power of giving back.”

Anastasi recruited local celebrities—including MMA fighter James “Binky” Jones and R&B singer Brave Williams—to take part in the event, sign autographs and deliver inspirational speeches. Meanwhile, his staff members, known informally as the Yummy Patrol, handed out slices and spread pizza love to the shelter guests. “I was never so proud of my staff as I was on this day,” Anastasi says. “Even our families joined in, and we made it an all-out Pat’s Pizzeria family day, with our wives and kids and cousins helping out. We fed 300 happy people that day.”

That same week, Linda’s Pizza & Ristorante, located in Manchester, New Jersey, brought family and friends to the Asbury Park Rescue Mission, where they served pizza to 40-plus people. And Paul and Debbie Gainor, owners of Pizza Zone (pizzazone.cc) in Spring, Texas, hosted a Slice of Hope event for the Star of Hope Shelter. “Paul grew up in a foster home himself, so he sees the importance of what we’re doing,” Kadwani notes.

Domino’s (dominos.com) franchisees were equally generous with their support. “Even with these chain pizzerias, they’re still owned by small businesspeople who work really hard,” Kadwani says. “In Chicago, there was a Sikh gentleman who owned a Domino’s pizzeria. There was a mix-up, and he delivered the pizzas a week before the party. He felt so badly that he sent more pizzas over again the next week at his own expense.”

Next year’s A Slice of Hope Week will move to June, and Kadwani hopes to build on the success of 2015. He also aims to put A Slice of Hope on firm footing through an endowment fund based on real estate in New Jersey. “Some of our donors have agreed to donate two family houses to us,” he says. “They’re worth $3 million, and there’s still a $2 million mortgage to pay off. If we can make arrangements to pay off that mortgage, the property belongs to A Slice of Hope. These are rental properties that will ensure we’ve always got revenue coming into the endowment. So we’re trying to raise funds now to buy the houses and get the endowment set up so that it will pay dividends to help others into perpetuity. It’s a very big deal for us, because we’re a small organization—we’re not the Red Cross.”
Kadwani believes Americans’ attitude toward the needy may be shifting. “They’re beginning to realize you cannot have 47 million people living in poverty in America. You can’t have 15 individuals in America owning more wealth than half the country combined. You can’t have one in seven children wondering if they might have to go without a meal.”
He believes the “greed is good” era, portrayed in the 1987 film Wall Street, may be coming to an end. “Now we have seen that you can get really rich and still be
extremely unhappy,” he says. “At the end of the day, you’ve got a hole in your heart, and all that money won’t fill it. Studies show that, to be happy, you need to give back and help others. Giving makes people feel good.”