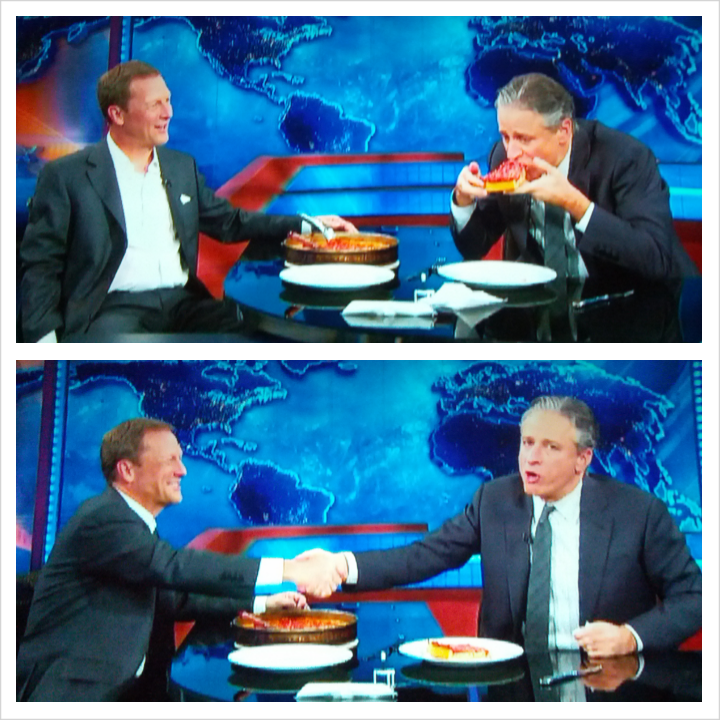 Marc Malnati, owner of the famous Lou Malnati’s Pizza of Chicago and a fourth-generation pizzaiolo, happened to be in New York on the day Jon Stewart, host of Comedy Central’s popular The Daily Show, went on a comedic tirade against his beloved homestyle pie. Stewart complained that Chicago-style pizza is “tomato soup in a bread bowl. This is an above-ground marinara swimming pool for rats … I want to know that, when I get drunk and pass out on my pizza, I’m not going to drown.”

As outrage mounted in the Windy City, Malnati created a clever video response and invited Stewart to try a Lou Malnati’s pie. Lo and behold, Stewart accepted the invite, and Marc went on the show on Wednesday to end the pizza war that had people buzzing on the Internet all week. Stewart even agreed to sample Malnati’s pizza. His verdict: “Very tasty.”

Malnati chatted by phone with PMQ Pizza Magazine’s Melanie Addington about his adventure this week. (Scroll to the bottom to watch the video clips.)

Q: When you first heard Jon Stewart’s rant, what was your immediate response?

A: My first response was, “Shut up. Just shut up. Here we go, another loudmouth New Yorker. Shut up. Somebody tell him to swallow a microphone.”

Q: How did you decide to make your video response?

A: We weren’t quite as quick as I would have liked, but once we got things going in the right direction, we were pretty effective. We were in New York when I saw it, and the idea just kind of came to us: “Oh, OK, we are here, we will respond. We will knock on his door.” We knew no one was going to answer. It was Sunday so…(but) we had fun doing the video. We thought the Lou Malnati’s fans that pay attention to our Facebook page would get a kick out of it.

A: The response was impressive. To get 65,000 hits on something, on anything, is impressive. There are so many responses that I haven’t been able to get through my text line or email or Twitter for three days now. People I haven’t seen or talked to for 30 years are calling to congratulate us or thank us for defending Chicago. The head of Chicago’s tourism bureau wrote me this morning, and it’s been pretty fun to open up all the messages.

Q: Did you know this would also be a great marketing ploy, or was that just pure luck?

A: We thought it would be fun, and we did it in such a way that we had a certain end in mind. We imagined it was quite a long shot—maybe 1 in 100 or 1 in 500—but we thought there was a chance. We gave it so much energy and put so much into it and, if that’s there, then you got a chance. Of course we had a dream, but we were fine just taking a few hours and doing the video. We had fun with it, and it was a nice way to spend the afternoon. We also got to see the Freedom Tower. Well, some of it. It was pretty cloudy.

Q: How did the invitation to appear on The Daily Show come about?

A: Evidently, somebody on (Stewart’s) staff saw the YouTube post. I don’t know if they scan the Internet for mentions of Jon Stewart. Who’s ripping Jon Stewart today? She picked up on it and showed some of the writers or one of the writers and, before you knew it, they called. They said, “We’ve got a fun bit in mind.” They came up with the concept: “Let’s do this truce thing.” I think they were just looking for a victim to be on the air to abuse further and then to finally shake hands with.

Q: What kind of pizza did you serve on the show?

A: We brought The Lou, of course.* Our marketing department is incredibly resourceful. So the director of marketing par-baked the pizza and put it in a bag and got on the plane, so that, when we brought it on the air, it would (still) be good. The pizza you saw on the air was hot and ready to go. The photography didn’t make it look that great, but I ate some of it, and it was good. It met my specifications.

In case you missed it, here is Jon’s original rant:

Here, Malnati appears on The Daily Show to teach Stewart about Chicago-style pizza, and Stewart calls for a truce:

* The Lou is made with a spinach mix, mushrooms, sliced roma tomatoes and three cheeses. Learn more at Lou Malnati's Tastes of Chicago.