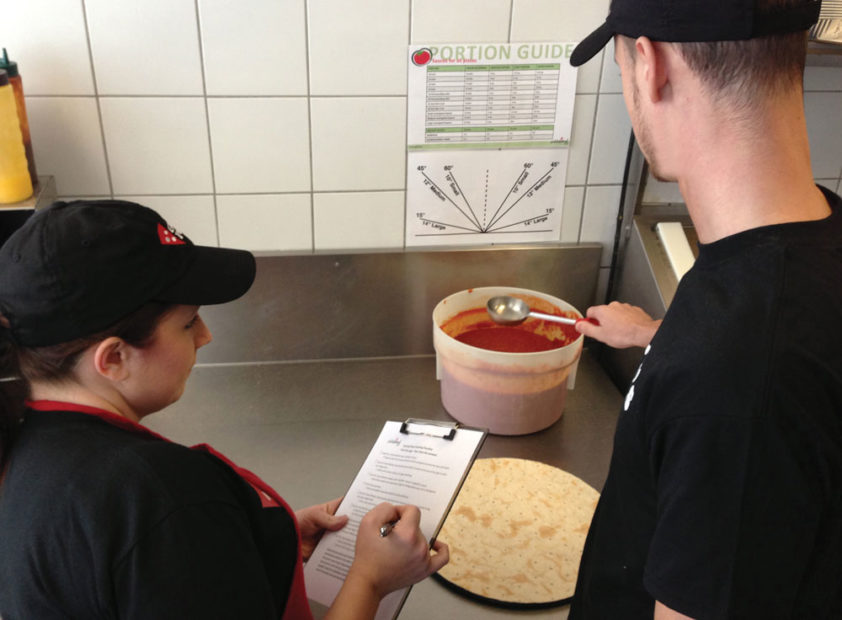 Like the temperature of porridge in the Three Bears’ house, the amount of sauce on a pizza needs to be “just right.” To some extent, of course, this Goldilocks-worthy portion is a matter of personal taste, so different pizza makers have varying definitions of “just right.” But for the better ones, the common thread is consistency. The most successful pizzeria operators develop tools and techniques that make it relatively easy for their employees to deliver consistency day in and day out. Venture behind the scenes at any nationally branded pizza concept, and you’ll see at least some of these tools and methods in action.

While a consistent amount of sauce may not matter to the person doing the saucing, it matters a lot to the customer. To determine if he likes less sauce or more sauce on his pizza, he needs to have a starting point. Whenever the customer orders a certain pizza, it should always contain the same amount of sauce so that he can begin to judge for himself whether he’s happy with it. If the patron determines that the prescribed portion of sauce is not enough, he can ask for extra sauce. If many guests ask for extra sauce, it’s quite possible that you’re doing something wrong and need to adjust your recipe accordingly.

Teaching your employees to apply sauce in a consistent manner—for every single pizza made in your kitchen every single day—is paramount. In this article, we’ll discuss the tools and techniques required to ensure sauce consistency across the board.

Memory is a funny thing. Scientific studies suggest that our memories are not nearly as reliable as we think they are, and what actually happened in the past and what we remember happening are often very different. So you probably won’t attain a desired level of saucing consistency by expecting your pizza makers to simply memorize sauce portions. That’s where the first tool comes in: a strong visual aid.

Create a poster that offers easy-to-understand illustrations depicting what a perfectly sauced pizza looks like—with both sauceless border widths and the correct portions—and place it in a prominent area of your kitchen. With this visual aid nearby, one quick glance by the pizza maker can help quickly determine the correct portion.

In addition, every pizza maker should be provided with a detailed chart that covers the following key questions:

• What tools should always be used to ensure  correct portioning?

• What are the prescribed portions for all pizza sizes?

• What are the prescribed amounts for light sauce  and extra sauce?

• How much of a sauceless border should the pizza have?

When it’s time to apply the prescribed amount of sauce, many operators prefer to use the spoodle, a flat-bottom ladle that helps you portion out the sauce and spread it evenly over the pizza dough. Others may start out using a scale until they learn what each portion of sauce should look like. Unfortunately, many will soon quit using the scale and try to sauce by eye instead. This isn’t such a good idea, since it often leads to mistakes.

Fortunately, there is a highly effective method for acquiring the right amount of sauce every time without using a scale. It all starts with the right spoodle size and a method called “saucing by angles.” It has been determined that, when ladling out sauce with a three-ounce spoodle, the angle at which you insert and remove the spoodle will produce the same amount of sauce each and every time. Let’s say your sauce portion for a small pizza is three ounces. Dipping a three-ounce spoodle into and out of the sauce bucket at a 60° angle will produce this desired amount. Four ounces of sauce for a 12” pizza calls for a 45° angle. Six ounces for a 14” pizza requires a 15° angle (resulting in a heaping spoodle), and eight ounces calls for using a 45° angle twice. Using a scale to test this method proves it to be accurate. (If your pizzeria uses different portions of sauce than listed above, you would simply adjust the degree of the angles to fit.)

Spreading the sauce around the dough calls for a little finesse. Keeping the spoodle flat and without pushing down, the pizza maker should work the sauce to the outside edge, using a spiral motion. With experience, a person can sauce a medium pizza in just two to three spirals around the crust. He should strive to leave the desired sauceless border while spreading the sauce consistently across the crust. There should be no large bare spots or heavy ridges of sauce.

A Matter of Scale

To achieve better portion precision, some operators use the scale-centered method of saucing. They employ a basic portion chart to determine the correct amount of sauce for the size of the desired pizza. The pizza maker puts the pizza crust on the scale and zeroes out the scale. He then dips the spoodle into the refrigerated bucket of sauce and gets a full scoop of sauce. He dumps the sauce into the center of the pizza until the desired portion registers on the scale—for example, four ounces for a 12” pizza. He empties the remainder left in the spoodle back into the sauce bucket. Then, using the spoodle, he spreads the sauce across the crust while it’s still on the scale. He uses the spiral method of saucing, moving the sauce to the outside edge of the crust. The goal is to maintain a sauceless border with a width of two fingers, or about 1½”, because the sauce will spread more as it heats up.

Not every pizzeria uses spoodles, of course—many pizzaioli still prefer a plain old spoon for spreading the sauce around the crust. But if you choose to distribute sauce using a spoodle, many opt for the round-bottomed variety rather than the flat-bottomed type.

Not surprisingly, technological advances have led to the development of automated sauce dispensers, which can save time and labor costs. These machines distribute the sauce according to preset requirements. An automated saucing machine frees your employees to work on other tasks and speeds up the production process. One manufacturer claims its device can dispense sauce accurately to within 1/10 of an ounce and can sauce up to 350 pies per hour.

The most successful pizzeria operators develop tools and techniques that make it relatively easy for their employees to deliver consistency day in and day out.

Consistency Is Its Own Reward

There is no perfect solution for the problem of sauce portioning and consistency. Using a scale yields better accuracy, but it takes more time. Saucing by angles isn’t quite as precise as the scale method, but it’s faster and frees up the scale for weighing more expensive food items. Whatever method you use, we recommend developing a system by which your trainers can rate a new employee’s pizza saucing abilities and provide feedback. This will take a little extra time in the early stages of the employee’s training, but it will ensure that the fledgling pizza maker recognizes and learns from his own mistakes, ultimately leading to increased efficiency in the long run.

Consistency in pizza making is its own reward. Your customers will know exactly what to expect every time they order a pizza from your establishment, creating a sense of trust and loyalty. It’s simply a matter of training your employees in the tools and techniques of saucing by following a few simple rules: Determine the desired width of the sauceless border, create a portion chart with the correct sauce portions, design a poster that illustrates the portion rules and sauceless border requirements, and develop a technique that is quick and easy to use for spreading the sauce consistently across the crust.

Meanwhile, if you’ve got a unique saucing technique that ensures both quality and consistency of product, I’d like to hear about it. Please drop me a line at dan@pizzaskool.com.