In an age of $10 delivery, Marco’s Pizza (marcos.com) is one chain proving significant growth is still possible with a quality product, business savvy and, most importantly, franchisee incentive. Living up to this philosophy, the Toledo, Ohio-based chain—currently the 17th largest in the nation, according to the most recent ranking from Technomic—plans to open at least one new store every week in 2011. In fact, when PMQ spoke with Marco’s president and CEO Jack Butorac, he pointed out that the economic recession, and now the recovery, has turned out to be the “perfect storm for growth.”

The chain didn’t always grow so quickly. In 2002, when Butorac met the chain’s founder, Pasquale “Pat” Giammarco, the executive—whose career was built at chains like Chi-Chi’s Mexican restaurant and Fuddruckers—knew he’d found an opportunity in the company, which had a little more than 100 units at the time. For Butorac, the timing was perfect. “I was retired and trying to improve my golf game, but it quickly became clear that I’m not that good at golf,” he laughs. “A friend asked me to analyze the Marco’s brand potential, so I drove to Toledo, went to one of the shops and ordered five products—and I loved it. I went to three, four, five locations, and the product was consistently great.”

In his review, Butorac asked Giammarco, an Italian immigrant, why he didn’t already have 1,000 locations. The short answer: He didn’t want to deal with franchises or sacrifice the quality of his food. Nonetheless, by 2004, after two years of cross-training and branding consultation, Giammarco sold Butorac a majority share of the company, making Butorac the new CEO and Giammarco the first franchisee and a major investor in the restructured business. Today, with more than 228 locations in 18 states and the Bahamas, what was once a small-to-medium delivery chain has more than doubled locations and now sets its sights on becoming the fourth-largest pizza chain in the nation. It’s an ambitious task, but the numbers show promise for exponential growth, with 34 new locations opened in 2010 and 64 confirmed for 2011. Although the delivery giants have slashed prices and reformulated recipes, Marco’s relies on product consistency, in-house financing, and finding franchisees who aren’t afraid to roll up their sleeves and learn the business.

Marco’s corporate is actually a small company. The LLC owns the trademarks and franchise agreements, and offers internal financing, human resources and marketing support. They’ve sold off the regional development rights to 35 area representatives with more than 1,100 individual store rights among them. The corporate office manages 27 stores owned by an outside entity composed of private investors. But, with a career’s worth of connections and a promise of profit sharing, Butorac has spent the past six years gathering an impressive mix of marketing and growth VPs who’ve walked away from successful careers or come out of retirement to help grow the Marco’s brand.

Upon purchasing the franchise rights, he recruited executives including Syl Sosnowski, creator of the Papa John’s “Better Ingredients, Better Pizza” slogan and Marco’s current brand positioning as “Authentic Italian Pizza.” Later, he recruited Bryon Stephens and Cameron Cummins, formerly of YUM! Brands; Peter Wise, a private sector marketing and advertising executive; and Dave Black, formerly a major Domino’s franchisee. “I gave them the opportunity to buy into the company with a very attractive price,” Butorac explains. “I’ve been able to attract people by offering them a piece of the pie; if we are successful, which we will be, they will enjoy it financially. Most of these people don’t need to live paycheck to paycheck—they’re here because they believe in the product.” 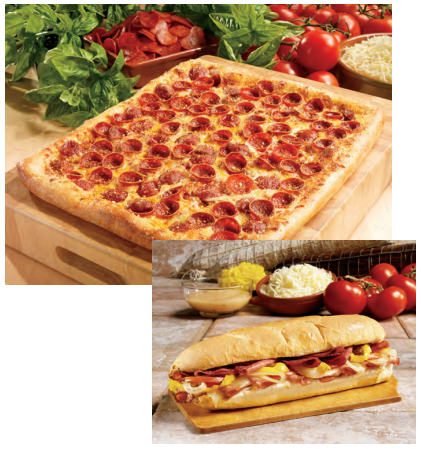 Before the Marco’s push to develop a national brand identity accelerated in 2004, the food was considered the chain’s best marketing tool, and today, it’s still what drives the chain’s management philosophy. “I want to be proud of what’s in every single box that comes out of each Marco’s,” Butorac points out. “More importantly, I want our franchisees to be proud, too.”

The menu at Marco’s favors old-school favorites over newfangled trends. The pizzas, subs and salads incorporate the time-honored Italian flavors Giammarco brought to his fi rst store in 1978. With only two crust types—classic and crispy thin—and seven specialty pizzas, the menu places an emphasis on quality ingredients and classic combinations: The Deluxe Uno is topped with mozzarella, pepperoni, Italian sausage, mushrooms, green peppers and onions; the White Cheesy Pizza is covered with a four-cheese blend, bacon, onion and garlic; and the Garden Pizza features mushrooms, olives, onions and tomatoes.

With most large specialty pies selling for $16.95, Marco’s prices cost a few dollars more than leading delivery chains. As a result, when Pizza Hut sparked the $10 pizza trend in 2010, Marco’s same-store sales dropped. However, the stores rallied back to 10% positive growth with the Big Square Deal, a rectangular, 16-slice pie with the first topping free for $6.99 to $8.99. “The critical thing was to keep the messaging simple and on-brand,” says Peter Wise, Marco’s vice president of marketing. “In the pizza category, there’s a tendency to load things up with extra stuff. The name is a good example—it’s very straightforward.” While the deal may not bring in huge profits, Butorac points out that it was most important to get the food into customers’ mouths. “We’ve done studies that show 72% of people who try our food have the intent to repurchase,” he notes. “No other chain has that.” However, as the chain gradually expanded out of the Midwest, it was important to make sure the quality and consistency of Marco’s ingredients was transferrable nationwide. “Pat identified specific ingredients that he wanted used; the key is getting them to the franchisees,” Butorac explains. “We struggled with the first distribution company, which, through no fault of its own, couldn’t deliver the right ingredients. So that’s why we created our own distribution company.” The Marco’s distribution company delivers to its Ohio, Indiana, Michigan and Kentucky locations.

However, the group “married up” with Richmond, Virginia-based distributor Vista Roma in May 2010 to reach franchisees in other areas. “We have the understanding that they must deliver the right ingredients to our franchisees, or our distribution company will step in and replace them,” he points out. “So far, they’ve done a great job.”

The Marco’s master franchise plan relies on cultivating its 35 area representatives who’ve bought in to grow the brand; they identify franchisees with potential and train them. “We work with our ARs on identifying the right sort of franchisees,” Butorac points out. “Preferably, it’s someone who has foodservice experience, is open to working with young people and knows how to follow the rules—military franchisees, for example. But it all comes down to our ARs.”

A chance of financial success through what Butorac describes as “sweat equity” depends on the individual franchisee, too, with an annual system sales average of $571,000 per unit. All new franchisees undergo an eightweek training period at a regional training store where they learn management—while experiencing every job in the store—and, most importantly, how to make a consistent product. If they demonstrate competency in the business, would-be franchisees get the option to buy in. However, Butorac stresses that they’re looking for people with passion and frequently invest in franchisees with promise. Although internal financing fell short of the 50 new locations executives intended to open in 2010, they’ve been able to secure financing for the 64 confi rmed stores and increased regional marketing budgets for 2011.

It’s no secret that the recession made pizza’s price point more attractive to the consumer. But the mix of experienced executives, the ability to offer internal financing and, most importantly, a commitment to quality has made the current economic scene a vehicle for growth for Marco’s. And while the product has set the Marco’s growth story into motion, its success will depend on an easily reproduced business model and finding the right franchisees. Or at least that’s how Butorac sees it. “I’ll be a franchisee’s biggest champion if they follow the rules,” he says.