A notable trend at the 2013 IBIE show suggests pizzas and baked goods may be a match made in heaven. - PMQ Pizza Magazine 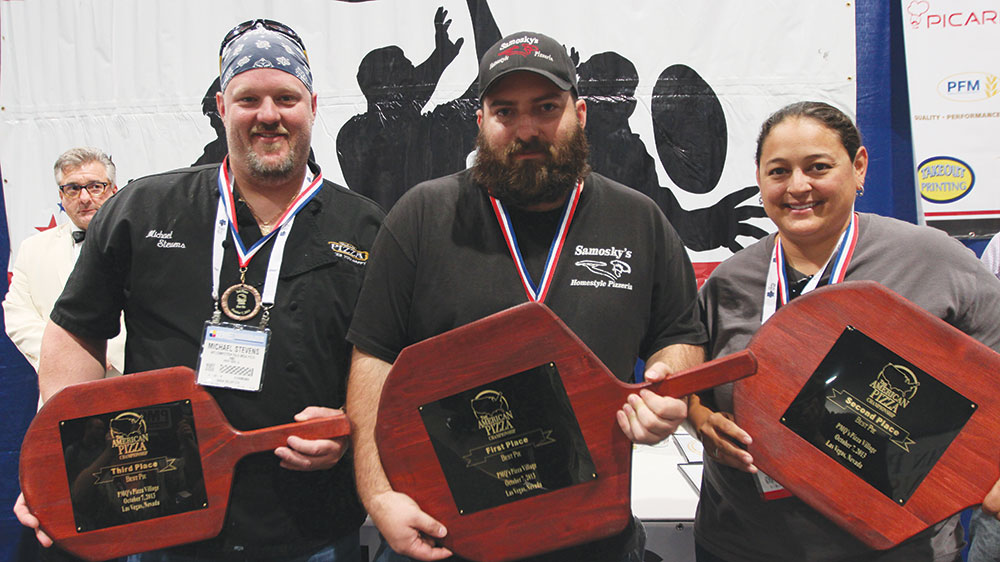 Pizza and baked goods have a lot more in common nowadays than just flour. In fact, a romance is blooming between bakeries and pizzerias, and a marriage could be in the making, according to industry leaders at the International Baking Industry Exposition (IBIE), held in Las Vegas October 5 to 9, 2013.

IBIE takes place every three years and brings together thousands of bakers to discover the latest in technology solutions, baking equipment, ingredients, and related products and services. For the first time in IBIE history, PMQ sponsored the Pizza Village, which hosted pizza industry vendors along with pizza making and dough spinning competitions, all while providing welcome relief from a show floor full of sweets by handing out free pizza to attendees who stopped by the booth.

Russ Belarus, president of Belleco in Biddeford, Maine, said representatives from both bakeries and pizzerias showed interest in his company’s products. “This expo, with its relationship with the baking industry, has really proven to be beneficial for us,” Belarus says. “It’s really the first time I’ve seen this happen—attendees are coming to the booth, saying they are with large bakeries but want to get into making pizzas. It seems to be a whole new market that we were not aware of.”

John Arena, owner of Metro Pizza (metropizza.com) in Las Vegas, spoke about this blossoming relationship at IBIE. Arena recently opened Lulu’s Bread & Breakfast at his first Metro Pizza location and has plans to expand it. The bakery required adding only a few new appliances to the kitchen and has boosted business, as customers now come in for breakfast, coffee, pastries or fresh bread throughout the day, Arena says.

Arena spent two years using a food truck to promote Lulu’s, testing the market before opening the bakery in his store. From his perspective, artisan bread making and pizza making are again merging. “The ovens in Pompeii were pizza ovens,” he says. “Bread makers learned that they could dress up bread and charge more. Garum was a popular condiment for bread in Rome and was the forerunner of the anchovy pizza.”

In fact, bread making is nothing new for Arena—his father and uncle got their start in a bakery in New York before moving into the pizza business. “These two crafts go hand in hand,” he says, noting that pizza makers are becoming more like bread makers, while bread makers are becoming pizza makers. He shares the example of Nancy Silverton, who’s best known as the co-founder and head baker at La Brea Bakery in Los Angeles. Silverton helped introduce artisan bread to grocery stores and now, after developing her own pizza dough recipe, runs Pizzeria Mozza (pizzeriamozza.com), with locations in Los Angeles; Newport Beach, California; and Singapore. Originally opened as a side project, Pizzeria Mozza, co-founded by chefs Mario Batali and Joseph Bastianich, has become renowned for its artisan pizzas, attracting celebrities such as Christina Aguilera and Jake Gyllenhaal.

For bread makers, moving into the pizza business is becoming a matter of necessity, Arena observes. As grocery stores and convenience stores have lowered regular bread prices, artisan loafs are a harder sale than they used to be. But add sauce, cheese and toppings, and people will pay a higher price.

Visitors to the Pizza Village also had the chance to try gourmet and gluten-free pizzas during the American Pizza Championship while being dazzled by dough spinning competitors in the U.S. Pizza Team’s Fall Trials. This year’s competitions attracted many first-time competitors, and pizzaioli went head to head in several categories, including Best Traditional Pizza and Best Gluten-Free Pizza in the culinary contest and Freestyle Acrobatics, Largest Dough Stretch, Fastest Pie Maker and Fastest Box Folder in the USPT trials.

The Midwest represented itself well in the American Pizza Championship, with a sweep of the Gluten-Free category by Ohio pizza makers. Heather Zook from Sinfully Gluten Free (sinfullygf.com) in Centerville, Ohio, took first place with her Three-Meat Pizza, made with a white-rice-and-millet-blend crust and topped with mozzarella and provolone cheeses, pepperoni, sausage, crumbled bacon and caramelized onion, lightly sprinkled with basil and oregano. Zook won a spot on the USPT and a free trip to compete in Italy at the World Pizza Championship. Second place went to Mike Amheiser from Pizza Dock in Fredericktown, Ohio, for his Mike’s Favorite Pie, featuring pepperoni, mushrooms, onions, green peppers, bacon and hard salami, topped with Romano cheese, fresh basil and garlic. Jason Samosky from Samosky’s Homestyle Pizzeria (samoskyspizza.com) in Valley City, Ohio, placed third with his Spinachi pizza, with garlic butter, fresh spinach, sausage, feta, dried cranberry, sunflower seeds and Asiago cheese.

The USPT’s Fall Trials challenged pizzathletes with a series of skill- and speed-based competitions. Dave Sommers from Mad Mushroom (madmushroom.com) in West Lafayette, Indiana, swept the first day of acrobatic competitions, successfully defending his title in the Fastest Pizza Maker and Fastest Box Folder categories. He also added a gold medal in the Largest Dough Stretch competition. The next day featured the Freestyle Acrobatics category, in which each competitor performed a dough spinning routine set to music. Bradley Johnson from Mellow Mushroom (mellowmushroom.com) in Chattanooga, Tennessee, took first place with a routine set to the funk classic “Play That Funky Music,” earning him a free trip to Italy to compete in the World Pizza Championship. Second place went to Patt Miller from A Slice of New York (osusliceofnewyork.com) in Columbus, Ohio, while Sommers grabbed the third-place spot.