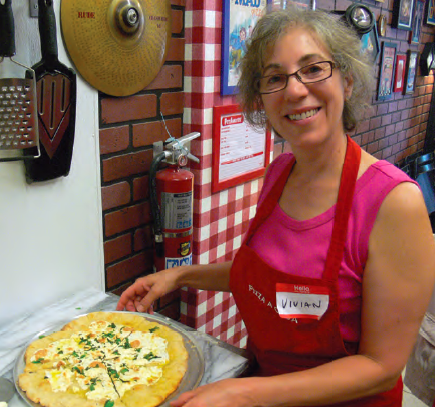 New York is the epicenter of American pizza trends. Thousands of pizzerias around the world claim to serve authentic New York-style pizza, and some even claim to use tap water from the city’s system. Few regions boast the abundance and quality of pizza present in the Big Apple, but one of the pizza capital’s most recent additions serves neither slices nor whole pies. In fact, it doesn’t sell pizza at all—it sells knowledge.

Pizza a Casa (pizzaacasa.com), which calls itself a “Pizza Self-Sufficiency Center,” opened its doors in April with the purpose of arming customers with the knowledge and tools necessary for quality home pizza baking. Chef/founder Mark Bello teaches customers how to bake pizzas using only supplies found in most grocery stores and home kitchens. “I didn’t choose these ingredients because of their availability; I chose them because they make great pizza,” Bello informs his students as class begins. Weekly classes give students a hands-on workshop that empowers and inspires pizza lovers of all ages.

Pizza a Casa sits in a cozy strip on the Lower East Side, separated from the commercial restaurant supply stores of the Bowery. A bialy store and a doughnut shop flank it on either side, attracting a strong walk-in crowd. The only problem is, most of those who wander in are looking for a slice, not a pizza slicer. “It’s getting to the point that we will be getting a neon sign that says, “We do not sell pizza; we teach pizza,” says Bello.

A native New Yorker, Bello’s passion for pizza erupted when he tasted the light, blistered pies of Totonno’s in Coney Island. When life took him to Chicago, he devised a system of transporting classic New York slices every time he visited home. “I used to buy a whole pie and wrap the separate slices in aluminum foil before zipper bagging and freezing them for the flight. They would sit inside my Chicago freezer, awaiting the moment I’d need a fix,” Bello explains. Inevitably, the supply ran out, and Mark needed an alternative method of feeding his pizza cravings. Late-night experiments turned hunger into obsession, much to the delight of his friends.

After moving back to New York, Bello became a cheese-monger at Greenwich Village’s premier cheese shop, Murray’s, where he taught a series of pizza making classes. He started conducting classes in any usable space, including Whole Foods, rented kitchens and even his own Chinatown apartment. As demand increased, he realized the need for an official headquarters. The new Pizza a Casa accommodates up to 16 people per class and takes students from raw ingredients to finished pies in just four hours.

“Being part of a class at Pizza a Casa has taken the mystery out of making pizza from scratch at home,” says one happy customer, Louis Coluccio from Brooklyn, New York. “There is so much value crammed into the four-hour class, and endless possibilities.” 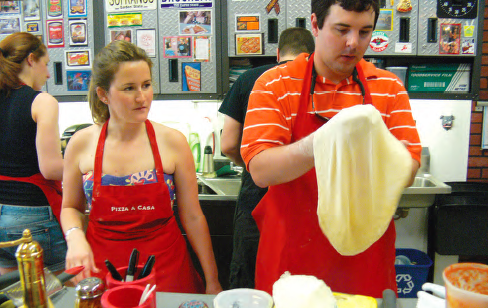 The space itself is filled with every pizza-related decoration imaginable. Bello has clocks, pens, magnets, posters and even a Sopranos license plate on display. All this covers faux brick walls with red-and-white tablecloth trim. Being in Pizza a Casa makes you feel like you’re inside the brain of an obsessed pizza fanatic—and you are! There’s even a disco ball in the corner, just in case a pizza-infused dance party should break out. In the retail section, shoppers and students can purchase quality pizza cutters, pizza stones, pizza peels, infrared thermometers and select specialty food products. Participants in the class receive a recipe guide and Pizza a Casa apron to take home, plus any dough that isn’t used during class.

Bello’s classes incorporate practical pizza making tricks and techniques that allow students to comfortably reproduce their in-class creations in the comfort of their own home kitchens. All classes currently focus on New York-style pizza, but plans are in the works to add a specialty course for gluten-free recipes. And, while most students use their experiences at Pizza a Casa to make pies at home, Mark has helped several former students open pizzerias around New York. One recent consulting project took Bello to Harlem for some dough therapy, and the fi ished product is one of the neighborhood’s top slices.

Scott Wiener is the owner/operator of Scott’s Pizza.