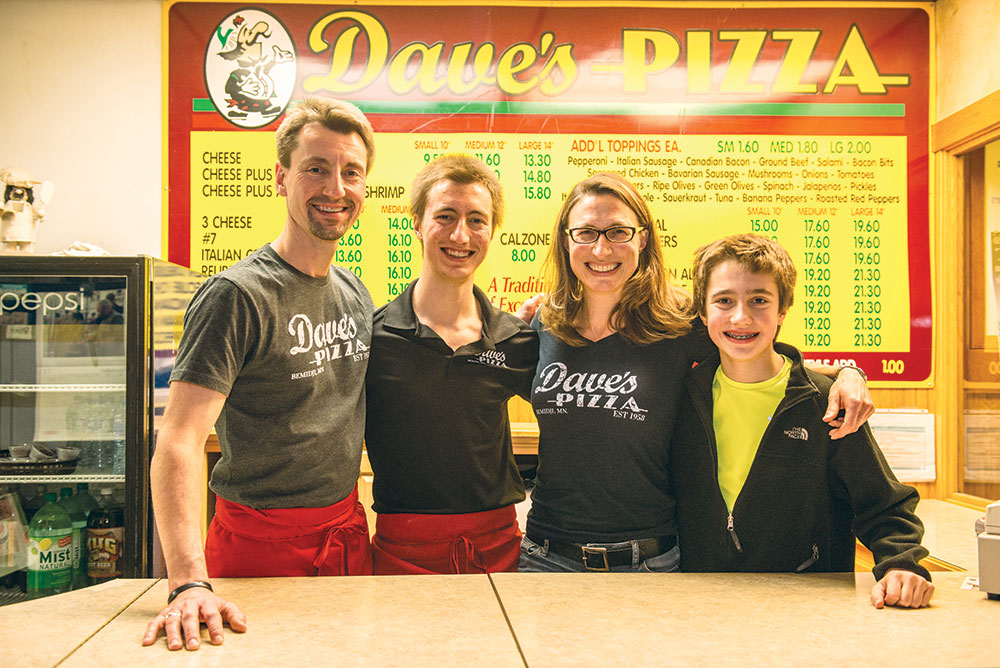 Running a pizza shop doesn’t leave a lot of time for hobbies, but Pete Fenson has found a way to split his time between his passion for pizza and his Olympic dreams. A bronze medalist in curling in the 2006 Olympics in Torino, Italy, Fenson spends his evenings with his wife and kids running Dave’s Pizza (davespizza.biz) in Bemidji, Minnesota, and his days in the curling rink. And although, “Team Fenson” didn’t qualify to compete in this year’s Winter Olympics in Sochi, Russia, the squad still has competitions coming up: the National Championship in Philadelphia in March and the World Championship in China in April.

A competitive curler since 1993, Fenson, who grew up in Bemidji, has many fond memories of eating at Dave’s Pizza, which opened in 1958, as a kid. After college, he returned to his hometown with his wife, Roxanne, and the couple soon learned that the pizzeria was up for sale and purchased it. “It just sort of happened,” Fenson says. “We had worked in a restaurant together, Roxanne and I, and we liked the speed and pace of the industry.”

They were both pretty fond of curling, too. The family that makes pizza together curls together, you might say. The Fensons’ sons, Alex and Graem, also split their time between the pizza store and the local curling league. “Curling is a family sort of game,” Fenson says. “At least it was where I grew up. But it didn’t get any national or international exposure, so if you didn’t come from a curling family, it was pretty tough to get started.”

Curling, a four-member team sport that began in Scotland, came to America in 1832. Blending skill with strategy and teamwork, players slide large, round stones—which weigh about 42 pounds—across a sheet of ice towards a target area. They use curling brooms to sweep the surface of the ice in the path of the stone, thus controlling its speed and direction.

For the Fensons, the game has become a family tradition. Fenson’s own parents took him and his brother, Eric, to league nights and taught them the ins and outs. His father, Bob Fenson, only recently retired from the game, but he still cheers for his two sons (former teammates who now compete separately) and his grandsons from the sidelines. Bob Fenson won the national championship when Pete was 11 and won the senior competition 10 years ago. Meanwhile, Pete’s son, Alex, has taken on his dad’s Olympic dreams—he became the Minnesota Junior Champion in 2012 and the U.S. Junior National Champion in 2013 and 2014 and has placed 7th in the World Junior Championship. Pete serves as his own team’s skip, a sort of “on-ice quarterback,” focusing on strategy and shot selection and taking the last two shots for the team. “It is a bit of a leadership role, but every position has its own set of responsibilities,” he says.

Meanwhile, pizza is Fenson’s other love, which made competing at the 2006 Olympics in Italy a special treat. NBC found out he was a pizza maker and arranged for him to visit a pizzeria in Italy, he recalls. “They put me in the kitchen in this pizzeria and taught me how to make pizza their way. It was the Neapolitan style, which is now becoming a big industry in the States. It’s the old-world way, and I got to experience that early in 2006.”

While in Italy, Fenson made pizzas for his teammates and athletes from other countries, but the highlight of the trip was standing on the winners’ podium and accepting the bronze medal. “It was unbelievable and fantastic,” he says. “My family was there. We were on the medal stand right in the front, and it was pretty great.”

After his Olympic triumph, Fenson returned to his regular schedule at Dave’s Pizza. “We have a really small place, and we love our customers,” he says. “We have a lot of regulars—some have eaten there far longer than we’ve owned it.” The store has 15 employees, some of whom have worked there for 10 or 15 years. After he and his wife bought the shop, Fenson says, “We made a real point not to change the things that were there. We didn’t buy Dave’s for an ego trip. It served what we thought was the best pizza in the area. It had been there since 1958, so we wanted to keep it going. I think some of our customers were nervous at first, not knowing for sure what we’d do with it.”

Over the years, the Fensons added a few salad options and a meatball recipe as well as some new toppings and combinations for their pizzas. “We still use these old recipes that started in the 1950s, and we make everything from scratch every day,” Fenson says. He meets with his staff frequently to make sure everyone stays focused on high-quality product and service. He says he doesn’t rely on specials or coupons to draw in customers, but he does have a Facebook page for Dave’s. Meanwhile, his shop gets a big boost in business from locals who have moved away—whenever they return to visit, they always make it a point to eat at Dave’s.

Dave’s offers only dinner service, freeing up Fenson’s time for workouts at the gym and practice on the ice. He says his staff pitches in during the competition season so he doesn’t have to be in the store every day. After all, he says, curling satisfies his competitive nature, and it’s just plain fun. “We’ve taken our family to a lot of places, and the people we meet along the way at the local, national and international level have been great,” he says. “We’ve made a lot of friends.”