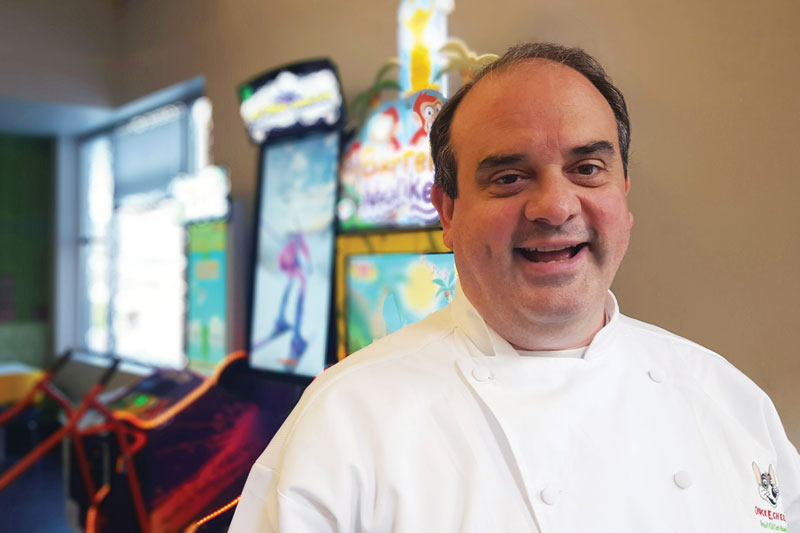 If you’re a pizzeria aiming for a share of the kids market, it’s hard to compete with a singing mouse and a cheerleading chicken that plays the tambourine. Now Chuck E. Cheese’s (chuckecheese.com), a longtime favorite with the pint-size crowd, has its sights set on the moms and dads that pay the check. After undergoing a change in management, Chuck E. Cheese’s, now owned by Irving, Texas-based parent company CEC Entertainment, is growing up fast, with a new corporate chef, a revamped menu and a new strategy to make parents want to stick around even when the little ones are all tuckered out.

For starters, 10 Chuck E. Cheese’s locations in the Dallas/Ft. Worth area surprised moms in July with impromptu spa treatments, including massages and manicures, along with samples of new menu items fresh from the kitchen. “We’ve been talking directly to moms, and they’ve given us a lot of great ideas to improve the Chuck. E. Cheese experience,” said Tom Leverton, CEO of CEC Entertainment, in a press release earlier this year. “Chuck E. Cheese’s has been giving families a safe place for fun, great food and lasting memories for almost 40 years. With these new additions, now it will be even better for parents and children alike.”

PMQ sat down with corporate chef Gregory Casale to talk about how his laser focus on quality is helping to update—and upgrade—the chain’s offerings to attract the hungry kid inside of all of us.

PMQ: What are some of the biggest changes happening at Chuck E. Cheese’s right now?

Chef Casale: Our biggest change is our new menu, which came out in early 2015. It includes not only some new pizzas, but a new pizza crust type, sandwiches and a couple of new desserts. Most importantly, the menu is geared toward adults, because we’d like the adults to enjoy their visit to Chuck E. Cheese’s as much as the kids.

So the new items have been specifically geared toward adults with their tastes in mind, and specifically to Mom, whom we know to be the CEO of the household. Moms make a lot of the decisions about where the family will spend its dinner and entertainment dollar. Millennial Mom today is a busy person, often taking care of a family, a job and a social life. We’d like to be that oasis for families to go and enjoy a night out and not have to sacrifice great food quality and variety of choices.

PMQ: Was the change in response to customers asking for more choices?

Chef Casale: I think it’s definitely something that’s in the restaurant marketplace across the board. I came to Chuck E. Cheese’s in November of 2014 after the acquisition of a Peter Piper Pizza concept. A new CEO took over about a year ago as well. With that new blood, we’ve definitely changed our focus to include food. As a matter of fact, I’d say we talk about food at just about every meeting now, so it’s becoming more a part of our culture and who we are.

“[Our new menu] items have been specifically geared toward adults with their tastes in mind, and specifically to Mom, whom we know to be the CEO of the household.”
—Chef Gregory Casale, Chuck E. Cheese’s

PMQ: Has the focus turned away from entertainment and more towards food?

Chef Casale: We will always be an entertainment restaurant and a place where there’s lots of games and fun, but we have to elevate food as being a part of that experience. I don’t know if it was ever as elevated before.

PMQ: Tell us about the new pizza.

Chef Casale: We changed our dough formula, but we utilized what we had. We scaled our dough ball size down and stretched it to the same size as a large and put it on a rectangular screen to give more of a flatbread appearance. We wanted to achieve an artisan hearth look, although we do cook it in a conveyor oven. We added two pizzas that are highlighted on the new Thin & Crispy crust—our BBQ Chicken and our Cali Alfredo. And you’re able to choose the Thin & Crispy crust on any of our specialty pizzas or a build-your-own pizza.

PMQ: How has the new pizza crust gone over so far?

Chef Casale: We held a blind independent study in eight cities across the country with a significant amount of people, and we were preferred over Pizza Hut for our thin-crust pepperoni pizza.

PMQ: How many crust choices do you now offer?

Chef Casale: We essentially have two crust types, both starting with fresh dough—our Traditional, which we use a dough sheeter for and which I’d characterize as American traditional style, and our Thin & Crispy, which is hand-stretched into a rectangle.

PMQ: Have you seen sales increase since you added the new menu items?

Chef Casale: Yes, the response has been terrific. In fact, I did some blogger events where I met face-to-face with moms, and the response has really been over the top. They appreciate the fact that we’ve considered their needs, and they really loved the Cali Alfredo pizza, with its fresh ingredients.

PMQ: How have Your new sandwiches been faring so far?

Chef Casale: I think we’re selling more sandwiches than we were before, but people know us for pizza, and that’s always going to be our core item. I think that when people walk in the door of any pizza concept, they’ve already made a certain decision about what they’re going to eat, but millennial moms like variety, and we want to provide that variety as well.

PMQ: Moms like salad, too. Were there any changes to the salad bar?

Chef Casale: Our salad bar is still very popular. We did some experimenting earlier this year and are now focusing in on improving the salad bar with enhanced quality products and a new look. Something I’m going to try with some stores in the Dallas area is posting gourmet salad recipes onto the salad bar sneeze guard so they can see examples of how to build something high-end using the ingredients at the salad bar.

“We will always be an entertainment restaurant and a place where there’s lots of games and fun, but we have to elevate food as being a part of that experience.”
—Chef Gregory Casale, Chuck E. Cheese’s

PMQ: Are there any new desserts?

PMQ: Chuck E. Cheese’s has introduced limited-time-only (LTO) specialty items for the first time. Tell us about those.

Chef Casale: Our first LTO, the Mac Cheesy Pizza, was launched in early October. We’ll be running an LTO every quarter, with the next one being a pretzel dipper that has 3” soft pretzels alongside cheddar cheese sauce. I want our LTOs to reflect our brand—fun and family-friendly. Every kid loves mac and cheese, and every adult secretly loves mac and cheese. As for the pretzels, we’re utilizing something that’s trending right now and making them interactive for the family. The LTOs will also provide our stores something new and fun to talk about on a regular basis.

PMQ: Did you bring the LTO idea with you when you came on board?

Chef Casale: I came from a Peter Piper Pizza concept that was acquired by Chuck E. Cheese’s. Prior to that, I had been working for Panera as the corporate chef for the Paradise Bakery concept. Both concepts use LTOs on a regular basis. When I came to Chuck E. Cheese’s and found that they had never done LTOs, I was like, well, we do them now! What we’ll find over time is that there will be some special LTOs that people really love and that they can expect to come back around at least once during the year. It’s those LTOs that can drive traffic.

PMQ: Are we talking about a general rebranding of the company?
Chef Casale: I think that’s implicit in what’s going on here. We’re exploring lots of new things with the new management team. We have Wi-Fi for the first time in our stores and new and refreshed looks inside the stores. There are several stores here in the Dallas area that have been remodeled. I think we’ll find the things that are working, and those will become our new rebranding model to roll out nationally.

PMQ: Will the mouse change again?

Chef Casale: Not that I know of. I think he’s pretty cute now.

PMQ: How does Chuck E. Cheese’s differentiate itself from competing concepts?

Chef Casale: At the end of the day, they’re kind of Chuck E. Cheese knockoffs. We’re the leader in the category. I think our position is that we’re going to take that leadership position and continue to lead—we’ll be the ones that other concepts like that will follow. There’s a lot of energy around here at Chuck E. Cheese’s lately, and I think it’s going to translate into the country seeing Chuck E. Cheese’s reemerge as the iconic brand that it is.

Chef Casale: It’s an ongoing project with quality improvements wherever I can find them. Anything is on the table, so I’m looking at wings and even a new sauce. What you’ll see over time is Chuck E. Cheese’s quality getting better and better.

Liz Barrett is PMQ’s editor at large and the author of Pizza: A Slice of American History.