You've heard of the calzone, empanada, pirogue and savory tart – but what of the great domed pizza in the round? Believe it or not, at times my food travels turn to sourcing products as a food detective. I had heard a rumor of a new-fangled pizza never before created anywhere but in one restaurant in Bali.

When in Perth I took Skywest Air to Bali and enjoyed a real cup of fresh brewed coffee before I rolled off the plane and into the warmth and smells of Bali. I relaxed as I noted the many offerings of rice, flowers and incense burning. First to the famed Kuta beach for a swim and then to retrieve and review the pizza! 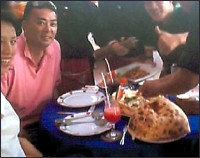 The original owner, Nunzio Gumina, is an innovative restaurateur from Fremantle, Australia, where he has now opened another unique foodservice operation, Limoncello Cafe, in addition to Papa's Cafe, which is located at the famous Alam KulKul Resort in Bali. Papa's Cafe is situated right in front near the beach for guests and locals alike.

It was last July when I first encountered the Volcano Pizza during a splendid spa stay at the exquisite Alam Kulkul Boutique Resort. As soon as I set eyes on the voluminous domed pizza, I thought of PMQ and how other pizza owners would like to know of this phenomenon. These singular marvels include Volcano Fujiyama, which erupts with assorted seafood, the Volcano Kintamani that is full of molten meats and Volcano Papa's that explodes with the lot! 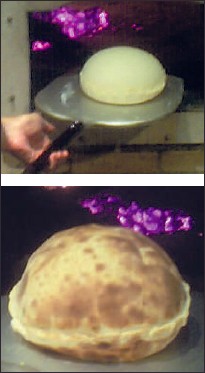 The beauty of this pizza is the impact of its visual appeal and the presentation. The server carries the mammoth pizza above his head on a silver platter. He places it on the table and draws two long knives from a scabbard on either side of his apron. With another great flourish and cry, he slices the pizza crosswise and cuts it open. Out comes the fragrant steam of its contents and the filling spills on to the plate as the upper crust is hacked to manageable mouthfuls.

The research that went into keeping the dome up and fully engorged was quite long and involved. The dough was tested and leavened with an air pocket like a Yorkshire pudding. At some time, a small air pump was tried with a sterile stainless steel pointed rod. Inserted into the covered pizza, the plastic bulb at the other end was manually massaged. Not only did the lid grow to a dome, the top actually browned crisp in the oven without deflating!

After creating six cookbooks and countless culinary formulas, one of my favorite presentations is the edible container. Sweet potato souffle in acorn squash, soft scrambled eggs in avocado halves or fish fillets in rice paper interests my sense of whimsy and omnivore tendencies.

Fresh baked wood-fired bread or pizza crust has been another beloved food, so encompassing the entire pizza without a soggy crust appealed. The crust here is thin and delicate, but crusty with a slight chewiness. 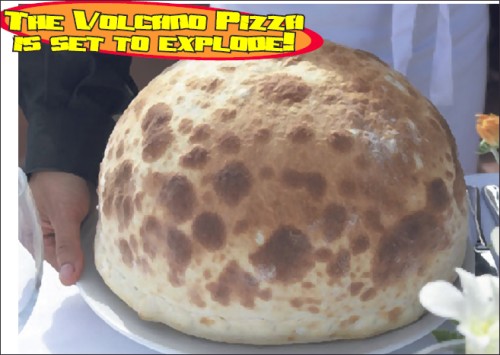 When it was brought to the table and slashed open, the fragrances were exhumed from a base of seafood or molten meats. Rather showy like a fajita, this is a popular choice for locals and tourists alike. Hmmm, maybe try a domed pizza fajita for fusion of two favorites…always food storming.