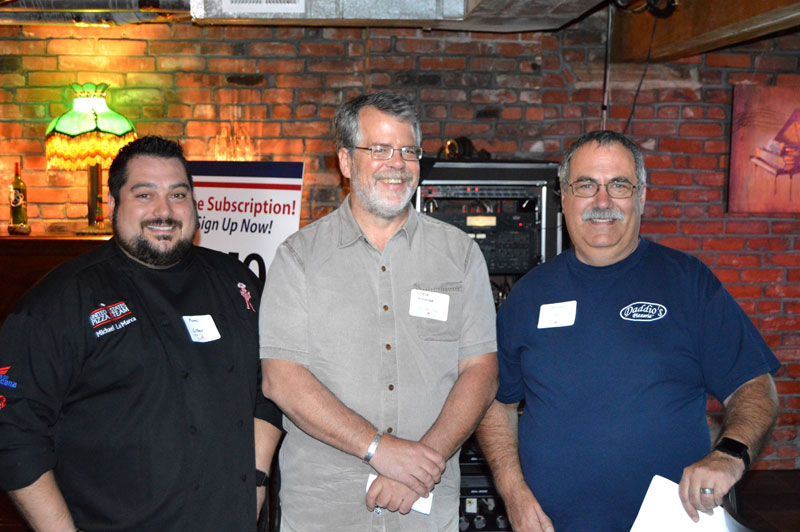 Richard “Daddio” Ames, owner of Daddio’s Pizzeria (daddios.ca) in Grande Prairie, Alberta, Canada, returned to his Colorado birthplace in July. There, he presided, with joy and insight, over a remarkable get-together with his adopted online family of pizza innovators. Ames, one of the most respected voices on PMQ’s Think Tank Forum, traveled the 1,500 miles from the plains of western Canada to Denver on July 15, with a few pizzeria pit stops and a video crew from PMQ on board—then from the Mile High City to Grand Junction, near his childhood home of Delta. Along the way, he took part in PMQ’s Great Western Pizza Summit, a four-pizzaioli panel discussion held at Wholly Stromboli in Fort Lupton. Joining Ames on the panel were Mike LaMarca, owner of Cleveland-based Master Pizza (masterpizza.com); Melissa Rickman, co-founder of the East Coast cuisine-styled Wholly Stromboli (whollystromboli.com); and Daddio’s Think Tank colleague Steve Hitchcock, who founded Soda Creek Pizza (sodacreekpizza.com) in the picturesque mountain resort of Steamboat Springs in 1999.

“Think Tank members—pizza industry operators in general—are a big family,” says Ames, who runs Daddio’s with his wife, two daughters and grandchildren. “My prior relationship with Steve [Hitchcock] was totally through the Think Tank, but that bond, forged over 10 years of exchanging ideas and experiences over the Internet, was comfortable enough for Steve and his family to host me in their beautiful Steamboat Springs home on the second day of the trip. That’s the amazing thing about the pizza industry. I worked in the computer and telephone industries my whole life before opening Daddio’s 10 years ago, and I’ve never worked in another line of work where it’s common practice for competitors to help each other out. When a local pizza chain operator in town recently asked me if he could stop by to pick up a couple of bundles of plain white pizza boxes, I said, ‘Come on down.’ If you can help a competitor out and have a good relationship, that just makes life a whole lot easier.”

Pizza makers helping pizza makers is pretty much what the Think Tank is all about. It’s members like Ames who have helped make the forum so successful—and, in doing so, they’ve built a true nationwide pizza community that keeps growing every year.

Before opening Daddio’s in 2004, Ames had never worked in a kitchen of any kind, but he did run a pizza delivery service for 15 years while earning a long-delayed accounting degree in his 40s and then delving into the corporate world. After taking early retirement from a Canadian high-tech firm, Ames told his wife, “I don’t want to be an accountant—I think I’ll open a pizza place.”

Daddio’s dream store rose rapidly from the gravel floor of a new strip mall space. Early on, when a challenge with moisture accumulating in his pizza dough drove Ames to a late-night Google search for solutions, he landed at the Think Tank. “I found that my fellow pizza industry posters were immediately eager to help,” he recalls. “Problem solved! That night I started giving back myself by commenting on what I knew about.”

Ames may have a low-key personality and deadpan delivery, but his try-anything spirit routinely generates bold marketing ideas, such as wrapping all of his delivery vehicles in low light-reflecting vinyl to promote the Daddio’s brand during the 18-hour Arctic nights in northwestern Canada. Despite its remote location and rugged terrain, Daddio’s is a bustling pizzeria where intensely loyal customers scale snowdrifts and sub-freezing temps to carry out pizzas and wings from the popular hot spot. Ames, a third-place finalist in Canadian Pizza Magazine’s 2012 Chef of the Year competition, puts his pizza collaboration credo into constant practice. He proudly cops to contacting Think Tank pizza makers to find out about trendsetting pies they’re featuring as Pizzas of the Month in their shops—and borrowing their ideas. “We put some of them on our menu from time to time,” he admits.

Ames says his wife of 39 years, his daughters and even his grandkids offer reliable backup when things get really busy at Daddio’s. That’s a good thing, too, considering that retaining employees is a big problem—they can make far more money working in the region’s oil fields. The Canadian bush also challenges Daddio’s delivery drivers, who occasionally have to contend with moose and bears.

But Ames, an avid hunter, fisherman and nature photographer, is simultaneously pragmatic and cerebral about marketing pizza, and he keeps up with the changing times. “I actively employ high- and low-tech marketing solutions to drive my business, including a very active Facebook page, gift card program and even fun contests,” he says. “But, in the end, it’s the quality of our ingredients and our pizzas that set us apart. As we say in all of our promotional materials, ‘because taste matters.’ I’ve been successful in a lot of jobs, but my greatest love—besides my family—and my greatest satisfaction comes from being part of the pizza business. That’s why you’ll typically find me in this T-shirt,” he adds, pointing to his shirt, emblazoned with the Daddio’s logo and the words “Think Pizza.”

A Meeting of the Minds

On his trip through majestic Rocky Mountain passes and the winding, raging Colorado River, Ames had time to ponder and observe, just as he did when he camped out under countless Colorado stars as a youngster. He talked about the strands of family, community and professional pride woven through the fabric of his five-decade journey. “I grew up in Delta, just 15 miles from the Grand Mesa,” he says. His memories of the place are fond ones. He recalls serving as an extra in the original True Grit movie, starring John Wayne and Glen Campbell. But the Ameses moved across the border to Canada when Richard was only eight years old; it was an impulse decision by his dad, a chiropractor, who had originally simply intended to take the family on a vacation trip to Alaska. “My family has always thrown caution to the wind,” Ames says. “That’s how I got into the pizza industry in the first place—on a whim, after I took my golden handshake from the corporate world.”

Once the family settled down in Canada, they stayed put. “I last came [back to Colorado] 36 years ago with my new bride to show her where I grew up,” Ames says. “I miss the mountains, the natural wonders and the sense of patriotism here. I’m still an American citizen, but my life is in Canada now, with my family and my business. It’s amazing to see how much more developed the landscape has become as I think about my days as a child with my classmates and brothers exploring the ghost towns and fishing holes of Colorado.”

So when Ames was contacted earlier this year by former classmates from his hometown about a potential reunion, he jumped at the chance. Always thinking about pizza, Daddio reached out to his Colorado Think Tank buddies to bring an extra dimension to his trip. Hitchcock (who calls himself “Bodega Highway” on the forum) and Dale Roberts, owner of several Blackjack Pizza (blackjackpizza.com) stores in the Boulder area, invited the coolest Daddio they know to hang out at their respective pizzerias during his trip. “Steve had the idea to get PMQ involved, and the Great Western Pizza Summit was born,” Ames explains. “From the day I arrived at Wholly Stromboli for the summit, I’ve had an amazing time. The panel discussion was driven by incredibly bright pizza operators who know far more about the business than I do. From the perspective of takeout only, resort locations, multiple stores and a full-service restaurant, I learned more than I handed out.”

Ames strives to learn more about the pizza business from everyone he meets. He consulted with Roberts in Boulder about the challenges of keeping up deliveries in a major university town and integrating new technology like a voice recognition ordering application. In Steamboat Springs, Hitchcock displayed his integrated POS system that tracks historical ticket traffic for efficient inventory planning and scheduling. But Soda Creek has another claim to fame: Its unconventional pizza offerings leverage Colorado’s abundance of wild game, with toppings like elk, sockeye salmon, buffalo, trout, rattlesnake and wild boar. “With Soda Creek, I’ve put together a team I trust to create ‘Best in the ’Boat’ award-winning pizza with unique, fresh toppings and daily made dough,” says Hitchcock, who also owns a clothing boutique in Steamboat Springs. “We do this with solid point-of-service technology and automated budgeting software that allows me the freedom to take time off, recharge and appreciate my awe-inspiring surroundings. I truly believe people in the pizza industry have a duty to themselves and their families to get away from the store and reach out into their communities.”

Between his two businesses, Hitchcock works long, hard hours. Still, he finds time to cherish Colorado’s natural wonders. “We raft, canoe, hike and mountain bike together as a family in one of the greatest spots on Earth to enjoy those activities,” he says.

After departing Steamboat Springs, Ames and his entourage headed for the biggest flat-top mountain in the world: the Grand Mesa in western Colorado, where the millennia have softened the green, jagged peaks of the eastern Rockies into desert vistas and rolling memories for native sons. “This trip has been a fantastic experience for so many reasons,” Ames says, with just the slightest trace of a tear welling in one eye. “It has transported me back to my past and moved me ahead into the future to share great camaraderie and exciting new ideas with people who are as passionate about the pizza industry as I am.”

Our PMQ crew parted ways with Daddio at the summit of the Grand Mesa. The ex-Coloradoan spoke wistfully of his mountainous birthplace and the pizza community that sustained him on his journey. “It’s remarkable that you can travel all over this continent and share a way of life with the great, dedicated people who work in the pizza industry,” he says. “I love Canada and Alberta, because that is where my family and my livelihood reside. But the beauty of this Colorado wilderness is a memory you can never forget. It sets your spirit free.”