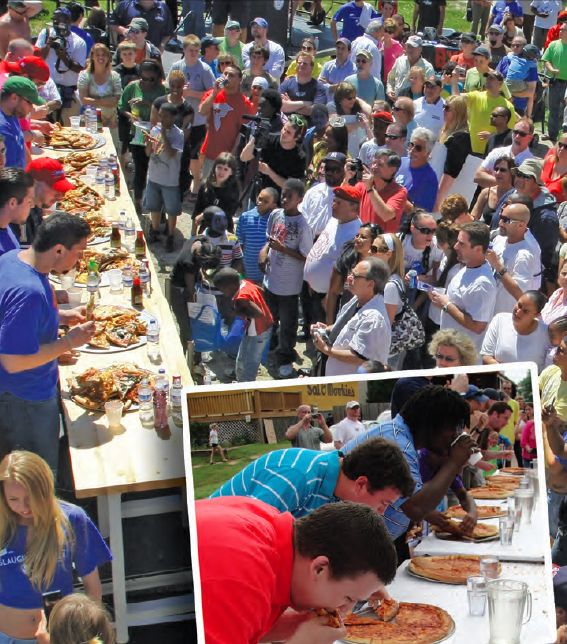 If there’s anything Americans love more than pizza, it’s a winner. So it’s no surprise that in the world of competitive eating—one of the fastest-growing sports in the country—pizza is the food that separates the amateur from the real masters of munch. Last June, competitive eater Joey “Jaws” Chestnut set a new world record for pizza eating when the 230-pound Californian inhaled 40 1/2 slices in 10 minutes during the Pizza Hut (pizzahut.com) Chow-lenge, making him—for now, at least—the undeniable world pizza eating champion, while bringing in heaps of positive media attention to the event’s host pizzeria (read more about Chestnut on page 53). While a mom-and-pop operation may not be able to host an event with the grandeur of Pizza Hut, experts and operators alike say that in this sport, even a small competition can generate big-time buzz.

Think competitive eating is not a real sport? “It’s no different than baseball, football or tennis,” says George Shea, spokesperson for the International Federation of Competitive Eating (IFOCE) and Major League Eating (MLE), the groups that sanction professional eating contests in the United States. “It has a governing body, it has rules, it has athletes that make money, and it’s very competitive. I actually think it’s one of the most beautiful sports there is.” Not to mention the fact that MLE promotions generate more than 1 billion consumer impressions worldwide each year.

Shea, who has promoted competitive eating events for more than 15 years, notes that hosting your own pizza eating competition doesn’t only draw crowds; it’s a stunt that customers will not soon forget. “Anyone can hire a band or sell pizzas for a dollar,” he notes. “Once a community gets a taste of competitive eating, it’s something they look forward to all year long.” Grand openings and special events often present an ideal time to host your competition, he points out.

This fact was not lost on Joseph Loccisano, CEO at Rocco’s Pizzeria & Restaurant (annualbrooklynpizzaeatingcontest.com) in Brooklyn, New York; for six years now, this family-run business has hosted The Annual Brooklyn Pizza Eating Contest during the 5th Avenue Spring Festival. The competition grants locals the chance to compete for bragging rightsand a $500 check, and usually brings 300 to 500 people to the pizzeria’s doorstep during the festival. However, the event itself is actually a year in the making. “What we do is host a yearlong pizza eating challenge in our store, where customers have to finish an 18’’ pizza in eight minutes,” he says. “Whoever can do that qualifies for the competition. The neighborhood looks forward to it all year long.”

Bruce Jackson, the founder of Brucci’s Pizza (bruccispizza.com) in Jacksonville, Florida, launched his first-ever Pizza Bowl this year in honor of Super Bowl Sunday. Competitors were selected through a process of elimination at trial contests at all three Brucci’s locations. To further engage the community, Jackson asked local celebrities—such as coaches and news anchors—to serve as guest judges, and local businesses sponsored the event by donating prizes. However, he believes the event succeeded by tapping into an existing energy in the community. “Football is a pretty big thing in North Florida—it was just the logical thing to do,” Jackson says.

For the Good of the Community

While generating interest for your business may be the most obvious benefit of hosting your own pizza eating competition, teaming the contest with a good cause is important for many operators who want to give back to the community. Scott Van Duzer, owner of Big Apple Pizza (bigapplepizza.com) in Fort Pierce, Florida, is no stranger to philanthropy. As founder of The Van Duzer Foundation—a group run in cooperation with his pizzeria that helps one community family every month—he hosted the Battle at the Big Apple in 2009, which raised more than 54,000 pounds of canned food in conjunction with a local Boy Scouts troop and attracted nationally ranked eaters, including the mohawked Pat Bertoletti from Chicago, currently ranked No. 4 in the world by MLE. “We had locals from our community competing against professionals,” Van Duzer says, “and we attracted more than 1,000 people.”

However, you don’t need big names to raise funds for a good cause; in many cases, the charity itself will bring people out to support it. In the case of Rocco’s, the event usually benefits MercyFirst, an organization that aids foster groups in the tri-state area. “It’s a twofold thing,” Loccisano says. “The community loves it, and it’s also a chance for us to do something for the kids.”

Mike Hauke, co-owner of Tony Boloney’s pizzeria (tonyboloneys.com) in Atlantic City, New Jersey, decided to get behind Alex’s Lemonade Stand, a group that’s dedicated to fi nding a cure for children with cancer, when he hosted the first-ever Pizza Slaughter Fest in May. The event gained enough attention to bring in two-time reigning Wing Bowl champion Jonathan “Super Squibb.” “For every slice of pizza eaten that day, we donated a dollar to the cause,” Hauke notes. “We also started carrying an organic brand of lemonade in the shop, and all proceeds from its sales go to Alex’s Lemonade Stand. The event was nuts—before we knew it, we had NBC and three radio stations here. The mayor even made the proclamation that May 15 is now Tony Boloney Day in Atlantic City.”

One of the worst things you can do is run a competition without a clearly defi ned set of rules, and issues are sure to come up. What constitutes half a slice? How long do your contestants have to keep their food down after the time is up? Do some research on the competitions you want to emulate. Each competition is bound to have its own set of rules, depending on a variety of factors, and you can also try contacting the IFOCE to review your ideas.

Rocco’s, for example, bans the stacking of slices to secure the most accurate count at the end. Because not all slices are equal, Brucci’s makes contestants finish an entire pie before moving on. Tony Boloney’s presents the unusual challenge of making contestants eat at least one slice from all 30 pies on the menu. At the Battle at the Big Apple, contestants are allowed to dip their slices in water as they chow down—though some competition organizers have banned this practice. 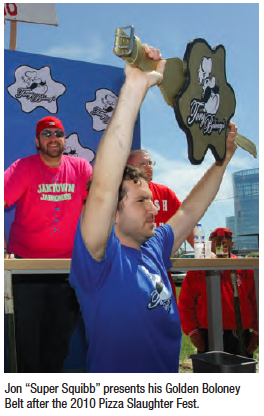 And, of course, many other logistics need to be worked out. When getting an eating contest off the ground, you need more than a venue and a slew of pizza. Shea notes that at all MLE sanctioned events, contestants are at least 18 years old, and a trained emergency medical technician is on-site. “We take that very seriously,” he notes. However, once the details are taken care of, the most important thing, he adds, is having enough publicity muscle to meet your needs. If you can’t sell the drama, you’re less likely to grab media attention. Once you’ve got the rules and concept down, consider hiring a professional to promote the event in your area. If your product is good enough, you might even get some attention from the pros. “We work with hundreds of sponsors, and we do 80 events a year in different markets,” Shea says. “All anyone needs to do is contact us. We get inquiries, but we also do outreach. We find out what people want to do and help them work it out.” Yes, there are many pizza titles out there. And whether you are looking to generate buzz, build community, get behind a good cause or simply raise awareness of your brand, at the heart of the sport of pizza eating is pure publicity.